At 2 PM today, I'll be celebrating 30 years of attending Broadway shows.  Yes, on Saturday, August 20, 1983, I entered the the recently newly re-named Gershwin Theatre and marveled at how HUGE the place was!  I mean, as if the parking garage/driveway right outside the door wasn't enough, there were escalators to the seating area, and giant waiting areas with bars!  Surely, all Broadway theatres has to be this enormous and glamorous, right?  But where were the rest of them? Weren't they all on Broadway in one big, fabulous row with flashy marquees?  And why wasn't this theatre on Broadway?  As we waited for the tuxedo-ed (yes, they had on black tuxes!) ushers to open the doors, all of my questions were answered by my drama teacher, who had been so amazing as to take a group of us drama kids to see her favorite show of all time.

Mame was the show, and it starred its original lead (and many from the original cast as well), Miss Angela Lansbury.  I knew her voice from hearing her on the Cast Recording, which my teacher played over and over, as well as the Cast Recording of a weird show called Sweeney Todd, which played this same theatre when it was still called the Uris.  And I saw her in Bedknobs and Broomsticks when I was a kid.  Did many people know who she was?  Apparently, the audience did.  That day, she got three standing ovations: one when she entered, blowing a bugle at the top of a spiral staircase in a sparkling gold pant suit, then at the end of "Bosom Buddies" which she and Anne Francine killed - it was AMAZING, and of course, at the curtain call. 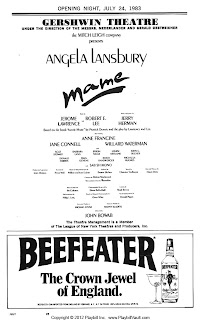 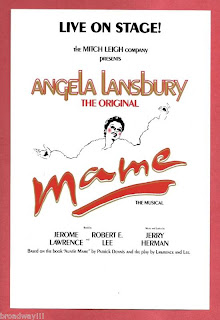 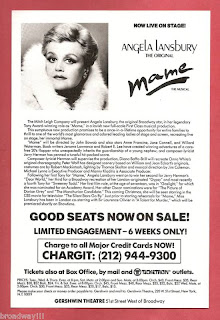 A flyer for the 1983 production of Mame

My seat was Orchestra row T112.  It was an expensive ticket at $37.50.  (That exact seat at this Saturday's matinee of Wicked, would cost $142.00, including the restoration fee, but before any fees for buying elsewhere than the box office.)  Boy, did we get out money's worth!  Tons of scenery - drops, staircases, huge set pieces that moved by themselves!  And the costumes!  The huge cast!  The dancing!  The orchestra!  It was way better than the record!

I just looked through that Playbill and smile at the flood of memories.  And I get a huge kick out of the show listings in the back!  Who would have known that  A Chorus Line would run another full seven years?  Or that the newest Best Musical, Cats, would eventually run even longer to become Broadway's longest-running show?  And how cool that the very next day, a little show called La Cage aux Folles would open, starring George Hearn, and would change theatre history?!  It tickles me that Diahann Carroll, soon to star this season in A Raisin in the Sun, would be finishing up the acclaimed run of Agnes of God, and that Cicely Tyson was in previews for The Corn is Green, the last show she was in before this year's Tony-winning turn in The Trip to Bountiful!  Amadeus was advertising "last weeks," and a play called Passion was playing the Longacre, starring Frank Langella.  Other theatre greats on Broadway that day included Chita Rivera(Merlin at the Mark Hellinger), Harvey Fierstein  (La Cage at the Palace AND Torch Song Trilogy - the newest Best Play at the Helen Hayes), Tommy Tune (fresh off a double Tony win for My One and Only at the St. James, with his Tony winning Best Musical, Nine, at the 46th Street), and legends Jason Robards and Colleen Dewhurst were starring in You Can't Take It With You at the Plymouth.  Talk about your star power!

Among the shows not listed is 42nd Street, the show that would end up being my second Broadway show.  It was in the middle of its own record-breaking run at the Majestic Theatre.  Yes, 30 years ago, that theatre was not home to The Phantom of the Opera.  Times sure were different!

August 20, 1983, as it turns out, is one of the most important dates in my life.  That was the day a high school activity became my true passion.

Tomorrow, I'll talk about the 10 biggest changes in Broadway theatre-going over the past 30 years.  And how many things really haven't changed, too!