30 Years of Broadway Shows: Things Change and Stay the Same (PART I)

As you might have read, yesterday was the 30th anniversary of my first Broadway show.  There are very few things in my life that have lasted 30 years, so, as you might expect, I've had some moments of reflection and remembrance.  And as such, I've compiled a list of the 10 biggest changes in the theatre-going experience between 1983 and 2013.  Here are 10 - 6; Friday, I'll share 5 - 1!

10. Dressing for the theatre: It was hotter than hell on August 20, 1983.  And there I was in my long dress pants, a long-sleeved shirt (sleeves buttoned!) and a neck tie.  The only reason I got away with not wearing a sport jacket that day was because I was at a matinee.  And even then, I still felt a little awkward, as most of the men in attendance has a jacket on, anyway!  These days, of course, pretty much anything goes.  And I figure, as long as I'm paying a lot of money to see the show, and I am fully clothed, clean and smell OK, then I am going to be comfortable. So, I am firmly in the summertime shorts/comfortable shirt (sometimes a golf shirt, sometimes a show t-shirt)/wintertime jeans and sweater camp.  My grandmother would be appalled - she dressed up to go to the movies! 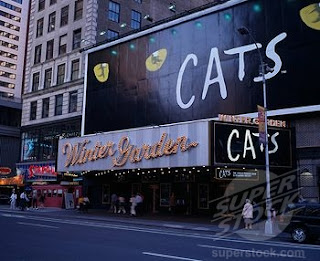 9.  The age of the "mega-hit": Cats was only a few months old in August 1983, but its influence continues to be felt.  And I'm not talking about the age of the through-sung "mega-musical," either.  We managed to get through that mostly unscathed.  More importantly, Cats ushered in the era of the super musical that could - and did - run for years.  No names above the title needed.  The combination of spectacle, popular music and superb merchandising have created shows that are brand names in and of themselves.  In August of 1983, the longest-running musical was Grease.  Four of the current top 25 longest-running shows were running then (A Chorus Line, 42nd Street, Oh, Calcutta!, Cats), and none of them are star vehicles.  And all 16 of the other top 25 that opened since 1983 are also star-free, living a long time beyond their original casts.  I think that is the real secret to longevity: a quality entertainment + a cast that doesn't rely a big name on the marquee.  The Book of Mormon is a great example of this very thing.  And before you say "stunt casting," which is not something made up by the Weisslers, ultimately it is the show that keeps the seats filled, no matter who followed Carol Channing in Hello, Dolly! or Julie Andrews in My Fair Lady.

8.  Cast recordings on CD and beyond:  I am pretty sure that within the next few years, CDs will have gone the way of vinyl, and you won't buy programs or get Playbills.  Instead, you'll buy a "commemorative flash drive" for each show complete with pictures, videos, cast bios, a few ads, and, yes... the cast recording.  According to more than one online source, the first commercial audio CDs were available in October 1982, the same month Cats opened.  Of course, I didn't have a CD player at that time - who could afford it?  No, I had Cats on vinyl, and later cassette (to play in my car).  But when I bought my first CD player, I bought my first four CDs: Cats, Evita, Chess (the concept album) and, unbelievably, Merrily We Roll Along.  The Broadway Cast Recording on CD picking were slim for a long time (but Merrily was available??).  And get this all four were double CDs and all four were almost $40 EACH!  Aside from the amazing sound (just like being there, really), CDs were the best for song selection! No lifting the needle to skip songs and risk scratching the record.  No tedious rewinding and fast-forwarding like with cassettes, and don't get me started on 8-track tapes!


7.  Theatre ticket discounts:  Sure TKTS was around in 1983, and if you saw a show with a group, you could get discount seats to a Broadway show.  Occasionally, there'd be "two-fers," coupons you could find in hotel lobbies or you could join a club for a fee to get access to discount tickets.  But all of that has really changed, especially for college students, and we can thank Jonathan Larson for that.  RENT certainly has made its impact on theatre history.  But it could turn out that the late composer's biggest contribution will be the advent of student discounts/rush seating/pricing.  Because he insisted that every performance of RENT have decent seats at a very inexpensive price available to those who have trouble affording Broadway shows.  Since then, that has evolved into lotteries and standing-room policies.  And now there are discounts available from all the major theatre websites, plus sites like BroadwayBox.com.  My point is, for pretty much any show (I saw The Book of Mormon and Wicked on a discount!) you can find discount offers, and you don't have to live in New York or be there to use them (unlike TKTS). 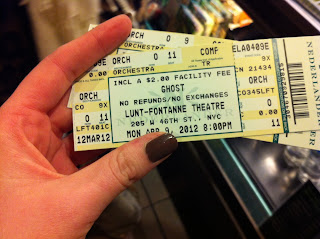 6.  Ticket Prices: Even in the 1950's when The Most Happy Fella had a top ticket price of $6.50 (I learned that from I Love Lucy), theatre tickets were considered very expensive.  In 1983, the top ticket of the hottest show was Saturday evening at Cats, at $47.50.  My Saturday matinee Mame ticket at $37.50 was a steal, right?  But it was still expensive.  Still, today tickets ARE expensive (those discounts not withstanding).  The same seat today would cost me $142.00, a whopping 367% increase in 30 years.  And that doesn't include fees added when you buy them online (more about that on Friday).  The supply/demand economy of Broadway also drives up prices in general, and for specific hit shows in particular.  And there is the advent of "Premium" seating, with prices in the hundreds of dollars for the biggest hits.  Gone are days when all orchestra seats cost the same.  It really all started small, when matinees were priced differently than evening shows.  The bottom line is: these days, if you want to sit in a center orchestra seat a few rows back, and the show is a hit, you are going to pay.  If you are less picky about where you sit, or can catch the show in previews, see #7 above.

Friday, I'll share what I think are the top 5 things that have changed on Broadway since 1983.