With the second Broadway musical of the season set to open tomorrow, this jam-packed season is really just getting started.  So I thought we'd play a little game!  (We haven't done that in awhile!)

HOW WELL DO YOU KNOW THIS SEASON'S SHOW LOGOS?

Below are several pictures cut from show logos - letters and bits of pictures.  Can you name the Broadway show logo each is from.  Except for the example, they are all from plays and musicals set to open in the 2013 -2014 season.

This is the "N" and part of the doorbell from The Book of Mormon  Hello! 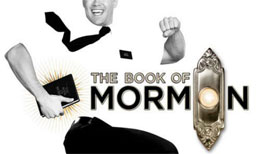 1.  IT SEEMS LIKE A NOVEL IDEA FOR A PLAY

2.  IT SEEMS LIKE A NOVEL IDEA FOR A MUSICAL

NEXT WEEK: THE ANSWERS AND EIGHT MORE LOGOS TO GUESS!