REVIEW: Harry Potter and the Cursed Child, Parts One and Two 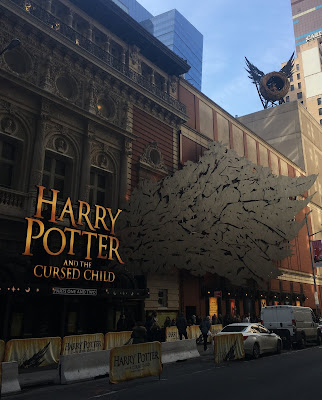 "Are all Broadway plays like this?" That was the question a co-worker of mine asked about a month go, when she saw Harry Potter and the Cursed Child, Parts One and Two. It practically drove her crazy not getting an answer from me for weeks, and even more so, not being able to discuss it until after I finally saw it. Yes, I made her #KeepTheSecrets. Here, I will endeavor to do the same for you.

If I am completely honest with myself, I went into it all being prepared for a let down.  It has happened to me many times before with highly acclaimed and popular shows. Though I was very very careful not to read anything about the show itself, I did allow myself to read a few articles about the transformation of the Lyric Theatre. Well, I can happily report that the theater, particularly the house itself, is stunning. The pictures they've allowed of it don't even come close to the experience of seeing it in person. The seats are nice and wide, and there is plenty of leg room - crucial considering how much time one will spend there. (Side note: The seating chart on the ticket site is pretty misleading. We were in Orchestra Row M, 3 seats in from the side aisle. I worried, based on the chart that we might miss a lot on the house left side. What a waste of worry! The view was perfect - far enough back to see the whole stage at once, close enough to see faces very clearly, and the entire stage was in view.) I will say no more about the theater so as not to give any more away about the space; you need to experience it for yourself.

What I loved best about all of the design elements is that they recognized both the films and the book illustrations while still being creative and new for the stage. Christine Jones' set design is remarkable for both its scale and minimalism; the characters don't get lost (unless they are supposed to) in the constant motion of the set pieces, but there's no lack of magic to the design, either. And that "magic" isn't a pun, it's figurative and liberal. The same can be said for Katrina Lindsay's elaborately simple costumes and Neil Austin's evocative lighting, which is notable as much for its color pallet as its striking use of darkness.


Gareth Fry should write a book (if he hasn't already) on sound design, it was impeccable, and practically a character all by itself. It probably isn't too much of a shock that the actual magic was first-rate, and while the sheer quantity of it is remarkable, Jamie Harrison's illusions are jaw-dropping no matter if they are old-school theatrical parlor tricks, clever stage craft, or "how did they do that?" moments. Amazing.

This show marked a first for me. I actually purchased the play's score by Imogen Heap. The music is beautiful, thrilling and a ton of fun, too. Her work here really adds to moments where there is only action and no dialogue. It also adds so much to the direction and movement, which, in a word, is flawless. I'd be hard pressed most of the time to explain where Steven Hoggett's movement ends and John Tiffany's direction starts, and vice versa. I adored their work together on Once, The Glass Menagerie and Hoggett's work on The Curious Incident of the Dog in the Night-Time. But here, they are at a whole new level. They have managed to make the production breathtaking in both epic and intimate ways. And this is one tight play. Not once did it feel its length; when it was over, I wanted more. I've seen 90 minute shows I couldn't wait to leave. Much of that credit goes to Jack Thorne's script, which fits nearly seamlessly with the rest of the canon, with its plot twists and turns, surprising character revelations, and battles between good and evil.

This is a show where I'd love to be in the ensemble. They all play multiple characters, and get to do really cool things during scene changes. This show - both parts - is the embodiment of the old stage adage "there are no small parts...". There are several supporting roles, and those played by Jessie Fisher, Geraldine Hughes, Edward James Hyland, Byron Jennings, and Kathryn Meisle really stood out. (I really want to tell you why, but I won't!)

Every member of the main cast is sensational, too, giving us so much to chew on. And they are outstanding - funny, tough, enigmatic. Here, we have adult versions of the kids we grew to love: Draco Malfoy (Alex Price), Ginny Weasley-Potter (Poppy Miller), Ron Weasley (Paul Thornley), Hermione Granger (Noma Dumezweni), and, of course, Harry Potter (Jamie Parker). And adulting for these people hasn't been easy. They now have kids, who come with their own set of problems. It isn't an easy life when you are a part of the wizarding world. While I wish the incoming class of Cursed Child all the best (and I really hope to see them), I can't imagine a better cast.

Just as Cursed Child hands off the mantle to the next generation in the Potterverse, with the two really main characters, the sons of Harry and Draco, so, too, are audiences seeing the next generation of fine British actors, Sam Clemmett (Albus Potter) and Anthony Boyle (Scorpius Malfoy). They were both brilliant. Gentlemen, you have a new lifelong fan in me. Bravo to you both.

So, I answered my co-worker, "No. Not all Broadway plays are like Cursed Child." There are so many things I want to write about this extraordinary production and vastly entertaining play. The themes, the portrayals, the surprises...but I won't ruin it for you. Just see it to believe it.

And when you do, please #KeepTheSecrets.