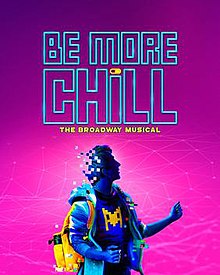 I would imagine that creating a logo for a show so firmly rooted in its fandom was a difficult task. Internet fans are famously loyal, and just as famously (infamously) easy to lose. I'm betting the powers that be at Be More Chill had to consider the fans more so than just about any other show needs to. It better look good on all the merch these kids would want, and different enough to warrant a new t-shirt, hoodie and hat. And it better be "cool."

But the stakes are much higher on Broadway, and there's a lot more to think about than 'tweens and teens and their eager to please parents. It certainly needs to be "classier" for its uptown digs and venerable company.

It goes without saying that how successful the logo is as far as my analysis goes depends on my tried and true criteria: Will it stand out from the crowd enough to even get noticed? Is it visually appealing and/or enough of a curiosity to make people stop long enough to even consider what they are looking at? Does it "say" enough about the show (without giving too much away) to pique enough interest in passersby to make them consider purchasing a ticket? In summary, will it be both art and commerce joined together in an iconic image?

The short answer is...mostly yes.  The long answer is a little more complicated. 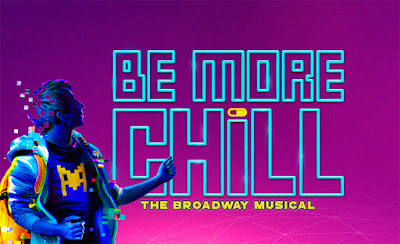 Will it stand out from the crowd enough to even get noticed? With a primarily hot pink and purple blended background and prominent electric blue secondary color, it certainly catches the eye. The downside is that the extreme colors likely provoke a strong reaction. Whether it appeals or not largely depends on one's love for pink. (Side note: it may be wise to pick a subliminal connection to last season's teen sensation Mean Girls.) It is not a color I like very much, so I won't be buying a window card for this one. But since I'm not their target demographic... 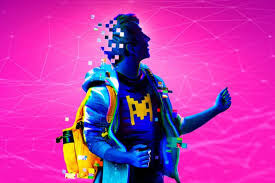 Is it visually appealing and/or enough of a curiosity to make people stop long enough to even consider what they are looking at? Assuming the viewer isn't completely put off by the color, I do think they will be intrigued by the young guy (grab that gay demo!) in the stylish hoodie and backpack, especially when they notice that the back of his head had exploded into pixels. 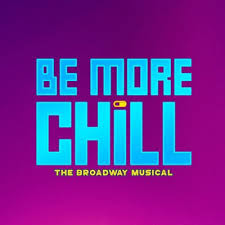 Does it "say" enough about the show (without giving too much away) to pique enough interest in passersby to make them consider purchasing a ticket? Now would be a good time to examine the title and its font. Despite what the current generation may think, the term "chill" goes way back in pop culture. Generations, even. It may have had slightly different iterations (chillax, anyone?) When I was kid, we often would tell someone who was upset or overreacting to "take a chill pill." Which brings me to the tittle over the i in chill. I'm willing to bet that adults who are actually buying the tickets for their kids think that is what that little yellow pill is. And I guess to a large extent that's what it is in the show. The font of the title also recalls old school computers, another thing we oldsters might recognize! Taken as a whole, though, I wonder if it says enough about the show to entice ticket buyers who don't have a clue about the content. (For the record, I know enough about the plot to recognize what I'm looking at, and I think it is clever.) 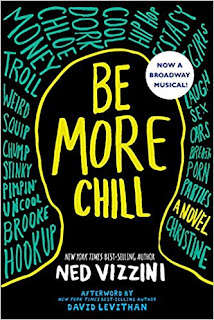 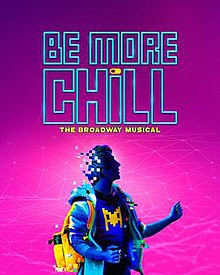 Will it be both art and commerce joined together in an iconic image? This logo is one of those that people will appreciate after they've seen the show. As they leave the Lyceum, they'll look at it and light bulbs will go off. From a merchandising standpoint, this will work in their favor. (They would be insane not to publish the novel that the show is based on with the logo as the cover.) From a ticket sales point of view, maybe not so much.


Early box office reports seem to indicate that the logo won't matter that much. But right now, the audience is mostly packed with fans. When that group is depleted, or their parents can't afford return trips, or the next big sensation comes along, the logo may not be much help. It least they dumped that hideous off-Broadway logo. Yuck.