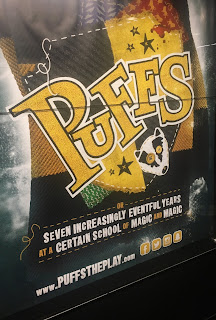 For our long-awaited visit to Hogwarts, Mike and reacquainted ourselves with the books and movies. As a treat, we thought it might be fun to see the long-running off-Broadway parody Puffs: Seven Increasingly Eventful Years at a Certain School of Magic and Magic to sort of cleanse our Potter pallets.

Turns out, it was a nice way to start our weekend of epic theater-going.

As you might guess, the show is largely a send-up of the epic seven novel series, and, I would imagine anyone in the audience unfamiliar with it would be pretty bored and maybe uncomfortable. Fortunately, the audience we attended with was fully into it, and the cast responded in kind. The play, by Matt Cox, crams most of the story into just over 100 intermissionless minutes, but with a twist - we see it all from the "behind-the-scenes" point of view of the Puffs, the magic school's misfit outcasts. This is a smart parody, never too mean, and a wonderful tribute to the books that changed literature forever.

This show proves that one doesn't need high tech gadgets and effects to create stage magic. The show's designer, Madeleine Bundy, has an endless supply of creativity. The set offers a backstage-y point of view, perfect for this "other point of view" tale, with multiple doors lending plenty of door-slamming farce to the proceedings. The props, which range from sock puppets to stuffed birds and everything in between, and the clever costumes (Moody and McGonagall are especially fun) allow for instant recognition and immediate laughs.


Puffs  features a solid, all-on-the-same-page troupe of actors, all of whom handle the demands of split-second timing and quick-change costumes and characters with remarkable energy and precision. Everyone gets multiple chances to shine here. Stand outs include Stephen Stout, who nails a send up of both Snape and Dumbledore, Anna Dart, who gets to play both good and evil with glee and Andy Miller, whose long red hair is practically a cast member all by itself, and her gift for facial expressions is generously shared. I also really enjoyed the narrator, a sly Harry Waller, who is especially fun in the final plot twist moments of the play.

The four main characters are wonderful. Geeky charm and endearing awkwardness are central to Reginald Keith Jackson's sweet turn, and Kullan Edberg is a riot as the moody, dissatisfied Slytherin wannabe. She takes snark and ambivalence to a new level, making her character arc all the more satisfying. Matinee idol looks, a smoking hot body, and a toothy grin combine to make Keith Rubin's romp one heck of a rock star Puff. He's just as funny as he-who-shall-not-be-named. Finally, Zac Moon as the Puffs own Potter-esque house member is spot-on as the ultra-nerd unwittingly thrust into the world of wizardry. A hang-dog face, dry delivery, and a knack for underplaying combine to make him the perfect foil for all the more bombastic characters that fill the stage around him.

Like many a parody before it, Puffs suffers from not knowing when to let up. Even at under two hours, it drags quite a bit in places, and grinds to a halt during a mid-show ad-lib section (on February 1, a just-short-of-uncomfortable ode to Black History Month) that got less and less funny as it went on and on, with the actor doing it more focused on breaking up his fellow cast mates than paying attention to the diminishing returns of audience laughter. Mr. Cox's script would benefit from an outside editor and a trimming of maybe 15 minutes in running time.

Still, it is a lot of fun, and I'm glad I saw it. Potter fans won't be disappointed. For the most part, I wasn't.