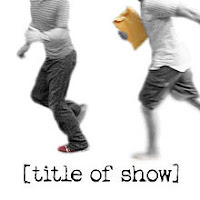 Today's Friday 5 returns to a reader favorite - title songs from Broadway musicals. This batch includes a huge pop hit, a cartoon, and operatic masterpiece, the first musical from a master and a big dose of 80's kitsch. I hope you enjoy these - soon, we'll be all caught up. Just 11 years to go!

MOVIN' OUT (Opened October 24, 2002 at the Richard Rodgers Theatre)

A fan of Billy Joel, it was hard to resist seeing this show, but Twyla Tharp's mega-dance musical had it all. I didn't expect the emotional roller coaster.

Subversive Sesame Street, yes. But heart-felt, sweet and brazen all at once. And it all started with the infectious Avenue Q Theme.

THE LIGHT IN THE PIAZZA (Opened April 18, 2005 at the Vivian Beaumont Theatre)

The entire score and show are so ravishing and beautiful. Thank goodness PBS thought to capture this 21st Century masterpiece. As promised, Mike. 😉

This show brought me so much joy. As a kid, I wore out the Xanadu movie soundtrack. As an adult, I loved the musical's irreverence and loving tribute/parody. It was nice to just laugh.

IN THE HEIGHTS (Opened March 9, 2008 at the Richard Rodgers Theatre)

The one that started it all for Lin-Manuel Miranda. A show I enjoyed much more than Hamilton because it has warmth and heart, In the Heights deserved all of its accolades and an even longer run than it had. Watching this, makes me realize how much the phenomenon is a derivative of the older show.