I think that the Broadway show contribution to this year's Macy's Thanksgiving Day Parade can best be summed up by a comment my brother-in-law made as they were announcing the Elf: The Musical segment: "You know, I'd probably go to a Broadway show if there was ever anything original showing." There you have it. 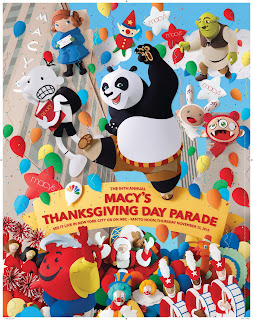 The first Broadway show represented on the telecast was Memphis with the song "Steal Your Rock and Roll," a show-stopper in the theatre, and a song that played well in the parade. Chad Kimball and Montego Glover have wonderful chemistry that says at much with a glance that less compatible actors sometimes never get. And the dancing was terrific, too. All that energy! A great way to start the show. Still, as appropriate as the costumes are to the show, the overall look of the number was kind of lackluster. High energy, medium impact. B+

Elf: The Musical was last up, and, again, they picked a great number to do for the parade, "Sparklejollytwinklejingley" - high energy, fun choreography, and an energetic lead performance by Sebastian Arcelus. But that was in the theatre. On screen, the dancing still looked great and the fun props usage played well, too. But Arcelus' performance got pretty much lost in the widescreen filming of the segment, thus half the magic was missing, too. B+

In between, we got one cop out and one"signature moment," both of which were flat as a pancake, and out of context not really a help in selling the shows they represented. At least both of the above numbers were representative of what the shows are really about.

The cop out came in the form of "Good Riddance" from Green Day's American Idiot. I say cop out because it is still, arguably, the most well-known song of the band's nationwide. But does it represent the show? Not in the least. Just like in the theatre, it is just a song - one that has NOTHING to do with the show itself - that isn't done in a particularly memorable arrangement, even. Instead of a showy, hard-rocking number, like, say "Holiday" done with ever so slightly tweaked lyrics and creatively staged would have really sold this struggling-at-the-box-office show. It didn't even showcase the talents of its two greatest assets, John Gallagher, Jr. and Rebecca Naomi Jones. Instead we were treated to camera/stage hog Gerard Canonico who was buried amongst the crowd like E.T. in a room of stuffed animals doing nearly one entire verse of the song. And let's face it... 20 people playing guitars in unison while standing in a straight line is hardly exciting compared to 200 high school kids playing instruments and doing complicated formations in the same space. Zzzzz D

Finally, the "signature moment" (if a relative flop show can have one) this is on their ads and photos outside the theatre is when the Million Dollar Quartet jams together while one is standing on a string base, another wails on the piano, and still another is literally bent over backwards playing the guitar. A medley of marginal hits, capped by "A Whole Lotta Shakin' Goin' On" works in the context of the show, but since none of the actors does an impression but rather "an approximation" who in middle America recognizes anyone in the show? Interestingly, my sister (a semi-regular theatre goer) did notice Elizabeth Stanley and the guys on the bass and drums. "The pretty woman sure can move!" said she. And it is true. The problem with MDQ on a telecast like this one is that it never moves. And is, therefore, not all that fun to watch. C-

This year, I asked straight out, after apologizing for forcing them to watch this year, "which of these shows do you want to see?" My brother-in-law answered with his own question, "Is there anything original coming to Broadway this year?" I had to think about it, going down the list in my head mentally. "Spider-Man, with songs by U2 is an original story, based on the comic books, and Wonderland is an original story based on Alice in Wonderland... wait! The Book of Mormon is completely original, and it is by the guys who write South Park."

"That is the show I want to see this year."

Again, that really says it all, doesn't it?