Looks like history is repeating itself with those Scottsboro Boys now playing at the Lyceum Theatre on Broadway.  That repeat is public protest over them.  Only this time the protest is about the racism on the show, not the crime they committed.

Thanks to a Tweet I picked up from my fellow blogger Steve on Broadway, I found the following photographs that depict current events on 44th Street.  Let me preface all of this by saying that I have not seen this protest myself, nor have I heard from the protesting group themselves.  However, just as they are exercising their right to protest, I will now do the same based upon what I can see from the literature they are distributing to passersby. 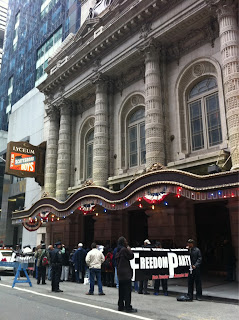 From the large banner, it appears that the group doing the protesting is the Freedom Party.  They claim that the use of the minstrel show and black face is racist, and that the show should be boycotted.  Well, they are right about the minstrel show and black face being racist.  Actual minstrel shows and acts that use black face are clearly poking fun of, and are demeaning toward African-Americans.  But in saying that The Scottsboro Boys is racist is so off the mark, it would be laughable if the subject weren't so serious.

Why would I dare say that their point is off the mark?  It is simple.  I would be willing to lay down serious money that few if any of these protesters have actually SEEN the show.  For if they had, and whether they liked the show or not, the minstrel show format and use of black face to style the show and tell its story serves to do just the opposite of what they claim it does.  It points up the bigotry and corruption of the Southern justice system.  It points up not only the racist attitudes against men of color, but the anti-Semitisim felt against their eventual champion (and Jewish) lawyer.  Further, the minstrel show format as used here makes very clear that the young men accused of two heinous crimes are heroes of their people and of all Americans who crave justice and civility.  Finally, the use of black face in this production is one of the most sad and difficult things to watch.  It is the point in the show where you see the boys at their lowest point of degradation, and, as a white man myself, I felt ashamed that people like me were responsible for that kind of thing.  And, had these protesters actually watched that scene, in particular, it is with sadness, yes, but also its  triumph as we watch as each of the Scottsboro boys defiantly removes said black face, and bravely faces whatever future lies ahead for them. 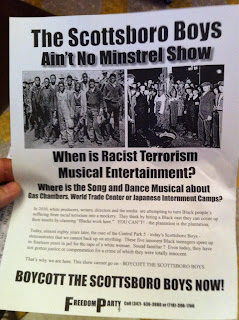 A look at their flyer betrays further lack of facts.  Apparently, they have also missed the latest revival of Cabaret, in which gas chambers are chillingly brought to life during that show's final moments.  Several plays and musicals depict the horrors of the Holocaust.  And there have been several productions (plays and musicals) that have depicted the aftermath of the World Trade Center.  And in just last two weeks or so, a major cast of theatre professionals was assembled for a reading of the Broadway-bound musical, Allegiance, which is all about the Japanese internment camps.

Protests at theatres have been a long-standing tradition all over the world.  Recent history on Broadway has had anti-gay groups outside the original production of La Cage aux Folles, as well as protestors outside the 90's production of The Capeman.

I am so proud to live in a country where people with a thought to share are free to express it by gathering like-minded folks, waving banners, chanting chants, and passing out literature.  Really, I am.  And I applaud this Freedom Party for taking a stand.  That is what this country is supposed to be about.  But unlike other protesting groups - Broadway Impact and the It Gets Better campaign come readily to mind - this one loses a lot of credibility because they clearly have no idea what they are talking about.  Maybe they should see the show and take notes, produce a clearly thought out and thoroughly supported list of perceived wrongs this show allegedly commits.  Then I might actually listen to what they have to say.

But regardless of any further action against the show from the Freedom Party, I know what I saw: 9 American heroes standing up for what was right in the face of a corrupt and lopsided system.  I also saw my own shameful prejudices and those of my ancestors.  Lesson learned.

MY REVIEW OF THE SCOTTSBORO BOYS IS HERE.