Today, I thought I'd address some of the emails I've gotten over the past few months, sharing your thoughts and ideas and answering some of the questions that come up time and time again.  And coming tomorrow a special answer to a very personal question...

Before I start, though, I'd like to thank everyone who takes the time to leave a comment here on the blog, or emails me or Tweets me.  And special thanks to my 13 "Followers."  Even when we disagree, I love it, because I love to talk theatre and it is even more interesting with multiple points of view.

Here are some FAQs that I get, and my answer to them:

Q:  Do you really answer every email, comment and Tweet?
A:  I answer every relevant comment or question I get.  It may take a few days, but I get to every single one.  By "relevant" I mean comments or questions that actually have to do with the blog or theatre in general.  I do not post mean comments directed at me, other commenters or specific actors.  Recently, I've been called every name in the book by people with a problem about me selecting Joshua Henry as  Mr. Broadway November, and my opinions about The Scottsboro Boys and any related issues.  It makes me mad and it does hurt.  But I'm not going to address that kind of thing past these three sentences.

Q: How old are you?  Sometimes you sound really old, and other times like a kid.
A:  Um, thanks, I think...  Let's just say I've been 29 for more than a decade and leave it at that.  Of course, if you really read my blogs carefully, you could figure it out.  And I'm going to take the "old" to mean knowledgeable about shows that opened before Bill Clinton was president.  And the "kid" part as you all identifying the gleeful exuberance I express when I am really jazzed about theatre. 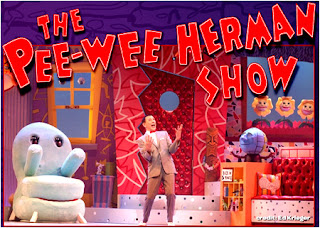 Q:  Why don't you ever write about [insert show title or Broadway star here]?
A:   Let me use a current show as an example.  I don't write much of anything about The Pee-Wee Herman Show because, as the reviews verified for me, you really have to know the old Saturday morning show of his to really appreciate the wonders of the stage production.  I was a grown up when that came out, and I don't have kids who watched it.  Therefore, it is out of my range.  I wish I knew more about specific plays (as opposed to musicals) so I could write more about those.  I have made an effort to see more plays, but money is tight and I'd rather spend what I have on my passion, musicals.  That is not to say that I don't write about plays at all.  I've spent some time on La Bete, Lend Me a Tenor and Brief Encounter over the past year.  And sometimes I don't write about certain shows or stars that I have seen, because I don't really care for the show or performance in question.  Why beat a dead horse?  Sure, I could write something snarky/bitchy about Elaine Stritch in A Little Night Music, every day, but I said what I had to say about that in my review and a few other relevant times. 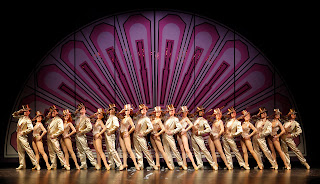 Q: Who is your favorite stage actor, actress and what is your favorite show of all time?
A:  What is funny about this question is that I always seem to get it after I post something about favorite actors, actresses and shows.  I always want to say, "did you READ my blog?"  But I'll be nice.  I have several favorites, and they change from day to day it seems.  Favorite actor... ever: Howard McGillin... currently: Aaron Tveit, Benjamin Walker, Chad Kimball, John Gallagher, Jr., Cheyenne Jackson and Joshua Henry.  Favorite actress...ever: Angela Lansbury... currently: Patti LuPone (though she is a forever favorite), Laura Benanti, Amy Spanger, Krysta Rodrigue, Ruthie Henshall and Michelle DeJean.  Favorite Show...ever... A Chorus Line... current shows: The Scottsboro Boys, Bloody Bloody Andrew Jackson, and OF COURSE, next to normal. 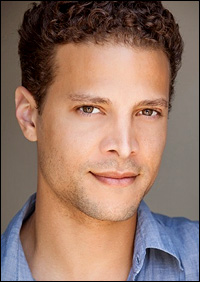 Q:  What is my beef with American Idol stars on Broadway?
A:  Geez.  I wrote one whole column on that topic, months ago, and I still get regular emails about it.  I have nothing against those folks coming to our neighborhood, so long as they bring some discernible talent to the stage.  Let's be honest.  On that TV show they spend a week perfecting about 2 minutes (on average) of a song.  I could be brilliant for 2 minutes a week.  But can they do it 8 times a week, two hours at a time?  And can they do more than wail and trill and do histrionic scales, slides and hand gestures?  Some can, some can't.  And many of them can not act.  Unfortunately, many people in today's Broadway audiences are star-struck and/or equate loud volume and long-held notes with actual quality.  That is not the case.  And doesn't it say something about the TV show that the people that don't win seem to be more successful in general?  That said, one of the best things this season so far has been seeing Justin Guarini in Women on the Verge of a Nervous Breakdown.  He is terrific.

Q: Why do you always mention Patti LuPone in TheatreScene?
A:  One, Ms. LuPone is one of our greatest living Broadway stars; two, she continues to be relevant; and three, because so many of you ask me why I do it.  It has become a bit of a joke.  But mostly, it is my love for the lady that gets her mentioned a lot.

Q:  Why don't you ever write about local productions?
A:  Well, I live in a very small, close-knit (read: in each other's business far too much) community.  And for every aspiring Sutton Foster we have here, there are dozens who really shouldn't even be in community theatre.  Harsh, but true.  And so, because I love my neighbors, I go, but keep I my mouth shut.

By far, the number one question I get is this:

Q:  How do you find the time to write so much and every day?
A:  Well, first of all, I love to write.  So it almost never feels like an effort.  Occasionally, I won't have any ideas, and then it is a bit of a worry.  But, I find time during my lunch hour at work, or at the end of the day when things are slower.  I also write mostly late at night and on weekends - mild insomnia will do that to a guy.  But the way I really keep up with it is I work on several at a time.  As I write this, you should know that I have started and scheduled almost 15 other things.  And I add to a few each each day - I work on TheatreScene a little every day.  I've been typing on this blog entry off and on for about a week.

Here is an email that I've had for several weeks, but never got around to posting.  These are the kinds of emails I love to get!  I love it when fellow theatre lovers share their love for a show or experience they've had.  Why else do this? 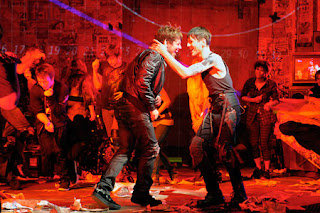 This is from a reader, TS in Florida, responding to, first, the guest blogger, who wrote about the three different St. Jimmy's he saw in American Idiot.  Then, it is more about my talking about AI and the show itself.  A real fan!

"What a glorious, spot-on review of the 3 St. Jimmys! My 14 year old daughter and I have seen the show 5 times (I think we're more obsessed than you), the most recent last weekend with Billie Joe. We'd only seen Tony Vincent as St. Jimmy before then, and we think he is the most dynamic Broadway presence we've ever witnessed!  As you felt, we absolutely loved seeing Billie Joe in his creation..in fact we flew up from Florida to see him. His voice was strong and beautiful, but he did make the part very playful.  My son and his girlfriend flew in from LA today and are seeing the show tonight. I'm really disappointed they're not seeing Tony, and I have no idea who the understudy will be. I'm literally on the edge of my seat to hear from them and their reaction to this thunder and lightning of a show!

"My entire family just can't understand why this show isn't on solid ground financially. Apparently, they're only selling tickets through January. We go to a lot of Broadway shows and other live entertainment and this is the most brilliant thing we've ever seen.  P.S. My daughter is going to be St. Jimmy for Halloween!"

TS: Thanks for writing!  I'll pass on your compliments to my guest blogger, who wrote about the three St. Jimmys.  And I have to agree with you.  Every week when I see their BO numbers I am shocked and disappointed for them.  Mostly, though, it is awesome to hear from someone as excited about Broadway as I get!  Stay in touch!

This is exactly the kind of thing I love to read and share!  Please keep sending me your questions and comments.  You can leave one here, email me at jkstheatrescene@yahoo.com or Tweet me on Twitter (jkstheatrescene).  And, if you are a regular reader, please sign up to be a follower on this site!