The Real History of The Scottsboro Boys

One of the great things about theatre for me is that while it entertains, often it teaches and inspires.  The most recent and powerful example of a musical that does all three is Kander and Ebb's The Scottsboro Boys.

I have to admit that prior to announcements about this show more than a year ago, I had never heard of the incident (which sounds so minimizing, but certainly not intended to be), let alone the nine young men falsely accused of rape and imprisoned.  I suppose some of that has to do with the "whitewashing" of history that happens in public school education.  It is one thing to say racism and injustice were unfortunate blemishes on our country's history.  It is another thing entirely to tell it like it really was AND to put a face (or nine) on it. 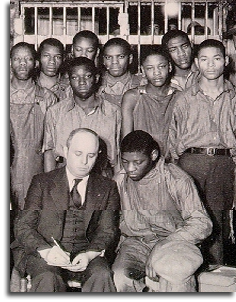 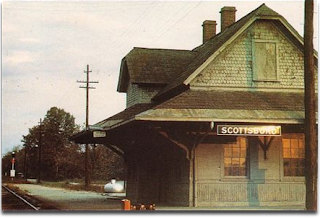 (Top) Lawyer Samuel Liebowitz and the Scottsboro Boys;
(Bottom) The Scottsboro train station
(University of Alabama)
It would seem to me that the Scottsboro boys would have secured a solid place in history, right along side Martin Luther King, Jr. and Rosa Parks.  But then again it makes sense as far as revisionist history goes.  King lead televised marches and was assassinated, a hero for a cause that should have triumphantly ended in glory for all, but ended in tragedy instead.  And Miss Parks represents everything we Americans like to think we all have in us - the strength to stand up for what is right and really effect change.  The difference, perhaps, is that in Scottsboro, the roots of prejudice ran deep, elected officials had to scramble to save face, and, as a result (and despite nationwide protests), the men were still found guilty - even with a recanted accusation. 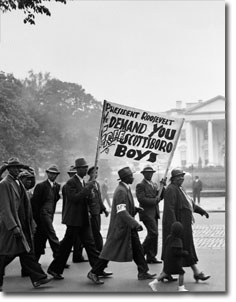 Protesters outside the White House in 1933
(University of Alabama)
Let's face it, no one, especially an elected politician, likes being made to look the fool, and woe to those who make him look that way.

Well, whatever you take away from The Scottsboro Boys the musical, there is a lot of information out there about the real boys and the event that continues to spark debate and controversy.  (Even my little blog has not gone unscathed; I simply will not post hate-filled, racist comments about me or the show.)  Garry Morgan, historian at the Scottsboro Boys Museum and Cultural Center in Alabama contacted me after one of his patrons brought this blog to his attention. 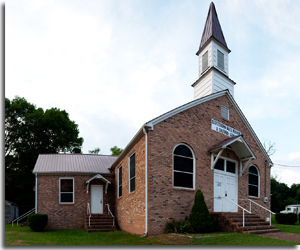 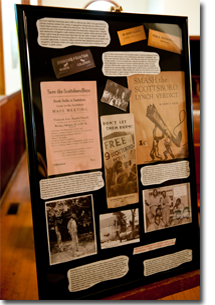 The Scottsboro Boys Museum and Cultural Center
and a display from the museum
(University of Alabama)
Yes, in Scottsboro, Alabama, there is a museum dedicated to this history, filled with artifacts of the event, displays about the boys themselves, and the accusers, the justice system and the impact this had on the national level.

Mr. Morgan sent me two links to share with you.  First, is a link to the Scottsboro Boys Museum and Cultural Center, a website created by the University of Alabama, found HERE.  And the second is a blog of stories and articles (Scottsboro Stories) about the event compiled by Mr. Morgan and others, found HERE.  Both websites are easy to navigate and are full of a wealth of information about the museum, the boys and the state of the civil rights movement in this country. 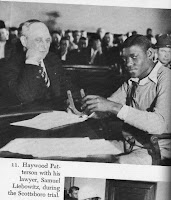 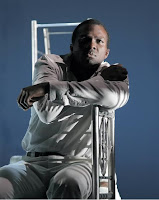 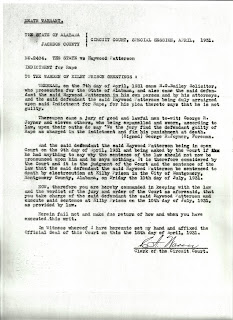 Haywood Patterson's death warrant
(iCopyright of Scottsboro Stories)
If you've seen the show and want to learn more or if you haven't yet and want to go armed with the facts, both sites are worth spending some time on.  They certainly help fill in some blanks about a part of American history that some people wish to hide or forget about.  Hiding it doesn't make the issues go away; learning more about it can cause change, and, even better, acceptance.  As they say, knowledge is power!