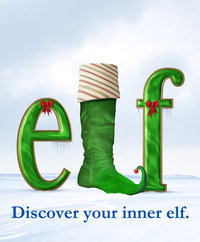 The logo for Elf: The Musical
It will probably be quite a surprise for people who know me that I am, in fact, looking forward to seeing Elf: The Musical, which started previews yesterday at the Al Hirschfeld Theatre.  Why?  Well, I generally do not like "holiday" musicals - I have church pageant nightmare flashbacks yearly - and find the sentimentality to be overwrought and production values faux-elaborate.  (I hated Here's Love, The Grinch, Scrooge: The Musical,and A Christmas Carol: The Musical, and refused to see White Christmas) Mind you, I love a good cry in the theatre, but not when all of my buttons have been pushed raw.  But perhaps the biggest reason people who know me will be surprised is because I hate (strong, but true) every single thing I have ever seen Will Ferrell in, and studiously avoid anything that has his name on a movie poster.  (Nothing against the man, personally, of course.  Maybe, as my brother-in-law tells me, I just don't get his "genius."  I doubt it.)

Nevertheless, I am looking forward to this show for some reason.  I'm thinking it has much to do with casting (Amy Spanger, Sebastian Arcelus (left) and Beth Leavel are three of my absolute favorite performers), the composers (Chad Beguelin and Matthew Sklar) who had a hand in a favorite guilty pleasure of mine, The Wedding Singer, and all sorts of creative folks from the fabulous The Drowsy Chaperone (Bob Martin (book), Casey Nicholaw (direction), plus the legendary Thomas Meehan (book)), and the fact that their entry in Broadway on Broadway was an infectious song, delivered with conviction and a notable lack of schmaltz.  But, interestingly enough, it was the logo and theatre displays that put the, um, final ribbon on the gift.
Regardless of what the above says about me, I love the entire holiday season, from November 1 - January 1.  I love everything about it - Christmas shopping, parties with friends, family time, and every Christmas song ever written.  It is just when it encroaches on my true love, the theatre, that I seem to have a problem.  Odd, but true.
As you can see, this entire issue has a very personal effect on me.  And when I actually saw the Al Hirschfeld Theatre all done up like a Christmas present, and saw the logo on the marquee, I felt an instant connection.  It is tasteful and not over done.  There is a hint of Broadway glitz, but in a grand manner, not in a tacky way, and the little red bows say "holidays" in a homey, inviting way.  And look closely... the only hints that it has anything to do with the film upon which it is based is in very small print in the billing. 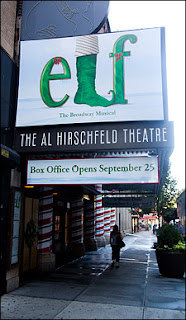 The Al Hirschfeld Theatre
The logo itself is very simple, but it says a lot.  Rarely, do you get a "scene" logo any more, but here its is the stark tundra of the North Pole, all snowy and bright.  But cold - definitely cold - as shimmering icicles hang from each letter.  The cold is made up for by the warmth of the lettering.  The "e" and "f" are Christmas Tree Green and marbleized and framed in a nice holiday brass finish.  Together the effect is both in the spirit of the holiday AND the elegant glamour of Broadway.  It is the "l" that shows the most creativity and hints at both the title character and the source material (see the film logo below).  It is a large elf boot -and it has to be elfin, just look at the pointy toe and bell tip!  Complete with a candy cane striped fold over, one can't tell from the perspective of the scene whether or not the elf boot is a giant one, or that it is tiny and we are just seeing a close up.  This ambiguity plays into the tiny nature of elves and the conceit of the story (which, if you don't know, I'm not saying). 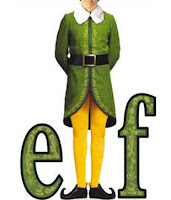 The Film Logo
Finally, you have to love their tag line, "Discover your inner elf" which hints at it being a grown up story that challenges you to reignite your childlike love of the holiday.  And these days, we could all use a big dose of that!

An advertisement for the show
Here is that Broadway on Broadway number from Elf: The Musical, featuring Beth Leavel and Matthew Gumley.

Comments?  Leave one here or email me at jkstheatrescene@yahoo.com or Tweet me!
Jeff
2.64
Posted by JK at 2:30 PM