When most of us - even really ardent fans - think of Broadway, we usually think of the shows we love, the stars we love, and the writers we love.  But, unless you are REALLY into theatre or have a monetary or employment stake in a Broadway show, you probably give little thought to the "powers that be."  You know, the folks that make shows happen, or make them open, close and become a part of history, right? 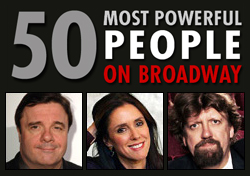 Well, Broadway Space.com (which refer to itself as the US Weekly of theatre sites - love it!) has come out with one of those end of the year lists which always tickle my thinking bones.  By way of one of my favorite theatre bloggers, producer Ken Davenport, who is a part of BroadwaySpace.com, I came upon the 2010 Broadway's Most Powerful People list.  Mr. Davenport is not on the list, one assumes, due to conflict of interest.  Find the list HERE.  The article also explains how the list was compiled.

Most people might be surprised to find that only 1 actor (Nathan Lane) made the list.  Yes, there are three others who are former/current actors, but are on the list for other, more powerful reasons: Joe Machota Broadway's first Sky in Mamma Mia! is an agent, Casey Nicholaw is a director/choreographer, and Nick Wyman is President of Actor's Equity.

There are some directors of note on the list: Julie Taymor (you have to be powerful to get $60M for an unproven musical) and Bartlett Sher (king of non-profit directing).  And one playwright, David Mamet, and one composer, Stephen Sondheim.

The top five, now that I see it, makes perfect sense.  They are the men in charge of Broadway's 3 main theatre chains, Jujamcyn, the Nederlander Organization, and The Shubert Organization.

The rest of the list is made up of the artistic directors of the big non-profits, Lincoln Center, Roundabout, TDF, etc., the heads of Broadway's major unions and producers.  All three groups make perfect sense: AD's pick and choose which plays and musicals get seen for big, well-attended theatre companies; the unions have the power to negotiate, and if need be, shut down the industry; and producers get the money (among other things) to get a show up and running.  If that isn't power, I don't know what is!

There are also several agents, the folks who get stars seen, a few casting folks, who pick who gets seen, and a couple advertising agencies, who market shows so that they are seen.

But perhaps most telling is the fact that only two critics made the list, and not that far up: Michael Reidel, at #35 (up 2 from last year) and Ben Brantley, at #31 (down 3 from last year).  I wonder how long it will be before theatre websites and blogs make a dent on this list.  (Broadway.com was on last year.)