Yesterday, I wrote about the frequently asked questions I get from readers.  Today, though, I wanted to share this question and try my best to answer it.  I think it is kind of brave of this reader to ask, and in this current "It Gets Better" atmosphere, who knows?  Maybe it'll help someone else. (And, yes, I asked if I could answer this publicly!)

My name is Jason and I live in a suburb of a small city in the Northeastern United States.  I am a sophomore in college, and just before I left for school this fall, I came out to my parents.  Telling them I was gay was the hardest thing I've ever done.  Like most guys who are gay, I think I've always known, and was too ashamed or embarrassed to admit it.  And I probably was gay before I even knew what it was.  I mean, I guess I am the stereotype: I am really neat, I wear nothing but the most current clothes, and before I even knew what they were exactly, I liked musicals and videos and stuff.  Most guys I know had a hidden stash of porn under their bed.  My stash was DVDs of musicals. The first one I ever bought was Joseph and the Amazing Technicolor Dreamcoat with Donny Osmond.  Then I got every show I could find on DVD.  But I hid them for fear that my parents and my older brothers would find out that I liked that kind of thing and know I was gay.  Since college started, though, I have found that there are a lot of people out there that are just like me, who love musicals and movies and all kinds of stuff that people in my town wouldn't even start to understand.  Now that I am out, I think I want to change my major to something to do with theater and business.  I don't want to act, though it would be cool, I guess.

The reason I am writing to you is that a couple of my friends here at school talked about finding your blog, and how fun it was and that you are openly gay.  I got on here, and I have read every single one of your blogs!  I am a real fan.  And I guess I feel like you understand me, because of what we have in common.  So I want to ask you a question that I hope you can answer.

My mom called me and said that she and my dad want to talk about my being gay when I go home for the holidays.  I'm scared, but I know there is no turning back.  I was thinking that maybe if I could explain my love of musicals, it might be a way to break the ice and help them understand why I'm not like my brothers.  So here is the question.  Why do you think gay people love musicals and plays so much?

Well, Jason, I am honored that you felt that you could share something so personal with me. I will try to answer your question from my own experience, though I hope you understand that everyone is different, and I would not presume to answer this like I am speaking for all theatre-loving gay people. Here it goes…I hope this helps. 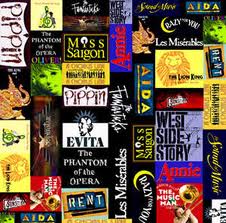 Like you, I think I’ve always known I am gay, even before I know what that meant. And like you, I have always been drawn to theatrical things, especially musicals. When I was growing up, there were TV shows that regularly featured Broadway songs and huge production numbers with lots of dancers, fancy costumes and great singing. Friday nights always meant watching The Donny and Marie Show and Saturdays was always The Carol Burnett Show. Both shows had big numbers in them and I loved those the best.

But it wasn’t until high school that my awareness of what being gay was and my love of musicals came together. I was not much of an athlete, so joining the theatre department was pretty much the only alternative. Interestingly, our drama department was pretty well respected and every production I was ever a part of always included athletes who would do a show in their sports’ off-season. I bring that up because there was much less bullying and teasing about being a guy in shows than in most schools, I guess.

Anyway, it was then that I gathered my own “stash”: cast recordings of shows I never heard of to go along with those of shows we performed. (And big records are a lot harder to hide than DVDs!) I just loved them, memorizing every word and imagining these great dance numbers on the greatest stages in the world. So, I knew I loved it, even though my experience was limited. 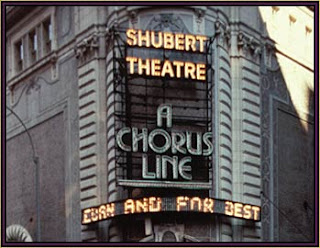 Then, when I was in 10th grade, my best friend at the time, Samantha, took me to see the National Tour of A Chorus Line. It changed my life forever. It was the first time I ever saw people in a play who were like me. When Greg says, “I always knew I was a homosexual,” I gasped and laughed with everyone else. But when Paul did his monologue, I fought with everything I had not to react to it. I wanted to cry. My heart was pounding and I couldn’t breathe. My friend put her hand on mine, and we looked at each other, and she whispered, “I know what this must mean to you.” And the tears flowed. I couldn’t believe that anyone could understand me, and I couldn’t believe that I was in a room full of people who understood Paul, crying like me, and bursting into applause when he was finished. Sam was the first person who knew about the real me. What a relief! 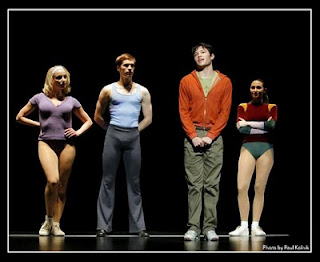 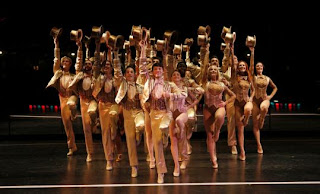 Paul (2nd from the right, talking) on "The Line";
Paul leads the A Chorus Line "wedge" during the
"One" finale.  Lights!  Costumes! Singing! Dancing!
And it was right then that I knew why I loved musicals so much. And I think it comes down to three things.

First, musicals are so unreal, and therefore, not like real life. I mean, who really thinks the Jets and the Sharks would try to dance each other off their territory? And because as a gay youth, I spent so much of real life trying to hide and not feel, I loved the escape of the unreality. And all of the cool lights and costumes? Two hours or more living vicariously through the lives of people who wore the nicest clothes and went to the best parties and who lived happily ever after… what an escape!

Second, there is the emotional component. In a musical, emotions are so heightened, and when words fail a musical character, their emotions allow them to burst into song and dance. I don’t know about you, but when I was not out, I was an emotional mess, and relished the opportunity to sing along with my records and relive the emotions in each song as if they were my own. It was very cathartic, and still is.

And third, there is the communal aspect of musical theatre that really appeals to me, and really filled the void, whether I was in the show or in the audience. You see, when you do a show, everyone involved is working together to create the same magic. For that time, you are a part of the group, accepted, warts and all. And in my case, people knew I was gay before I ever dreamed of telling anyone… hence my best friend taking me to A Chorus Line, and meeting my very first boyfriend. Shows come and go when you perform them, but when you are in the audience the feeling is much the same. Where else can you go where a thousand people are there sharing the same experience with you? Where everyone around you enjoys the same escape? Best of all, there is no judgment against you for being there.

As a gay man, in or out of the closet, those hours spent in a world where the fantastic is possible, and where no one in the room hates you for being who you are, are among the most cherished moments of my life. And, I need to be perfectly honest with you, Jason, I am pretty sure I am still alive today thanks to those times.

I’m not sure I answered your question or not, but I hope it helps you to know that you aren’t the only one. Before I close this, though, I’d like to offer some unsolicited advice and a vote of confidence.

You are a brave young man, and you have already taken the hardest steps: admitting it to yourself and to your parents. It won’t ever be 100% easy to tell others, but you got the most difficult and important people to tell out of the way already. And, while I completely understand your fears and worries about talking to them, remember that you are lucky that they want to talk to you about it. Not everyone is that fortunate. Now, here’s my advice. You have had much longer to deal with this than they have. You have already worked through some anger, confusion and fear. They have not. So the very best thing you can do is listen without interrupting while they get out whatever it is that they have to say. And remember, they are struggling, too, so how they say something might come out wrong or be more hurtful than they mean it to be. Try to understand them as much as you want them to understand you. And if things get too emotional, don’t be afraid to stop, walk away and come back when things calm down.

I hope this helps, and on behalf of anyone who reads this - your letter and/or my response to it - and gets help from it, I thank you for sharing this. Please let me know how things work out.


OK, readers! If you have any advice or bits of wisdom to share with our friend in theatre, Jason, please write! I’ll be glad to forward messages to him and to post things here, too.