Over the years that I've been doing this blog, I've often mentioned that Annie is not one of my favorite musicals.  More often than not, it annoys the stuffing out of me.  And it is for three very specific reasons: 1. the song "Tomorrow" is like finger nails scraping a chalkboard to me - repetitive, sickeningly sweet and screechy; 2. those annoying orphans, bratty, repetitive, sickeningly sweet and screechy - I'm with Miss Hannigan, here.  They are so unlikable, it is no wonder they aren't being adopted; and 3.  Annie herself, depending on casting, of course, but the nasally voiced urchin who is too smart ass for her own good makes me want to snatch that curly wig right off her head and then just scream.  Don't get me wrong.  I can understand why it is so beloved - before Disney, there wasn't much out there for the family to see.  And truth be told, I like most of the Strouse - Charnin score.  I can even say that I love four of the songs: "It's a Hard Knock Life," "Little Girls," "We'd Like the Thank You, Herbert Hoover," and "A New Deal for Christmas."  Heck, I'll even go so far as to say that the reprise of "Tomorrow" in the White House is pretty near perfection as a book scene/song combo.  Why do we have to hear it three full times before we leave the theatre?  And for all my grousing and grumpiness regarding this beloved classic, I'll start off by saying this revival is not the worst Annie I've ever seen.  But it is far from the best.

I still hate "Tomorrow."  This batch of orphans is particularly annoying.  BUT what really galls me about this production is the overall half-assed look, feel and energy of it.  It is almost as if all involved are saying, "People will come to Annie in droves, no matter how much we out into it, so why kill ourselves?  Hand me a stack of money to count..."

You may note that I did NOT mention the girl who plays Annie as something I didn't like about this show.  Taylor Richardson (on for an ailing Lilla Crawford) was a real pro up there - smooth and full of finesse, she does everything right, including not singing through her nose, plus she manages to walk that fine line between sweet and cloying, tough and obnoxious.  She's a nice mix of strength and vulnerability.  And she has amazing chemistry with all of her co-stars, especially her arch nemesis and her biggest hero.  But I have just one question: who is making her tawk like Snookie from Jersey Shore?  Leapin' Lizards is right, girl!

Was that person director James Lapine?  I'm thinking so, considering that his collection of orphans all have accents so thick that their scenes are like watching a foreign film without subtitles.  Mercifully, if not realistically, the accents largely disappear when they sing (or maybe I just know the words and my ears hear it OK).  And while it is kind of interesting that these little ladies aren't sappy girly girls, they are more butch than all of the Newsies combined, and not even half as entertaining.  I am shocked that such an acclaimed director would allow so much mugging in place of real acting, even in the littlest kids.  This is Broadway, Mr. Lapine.  The overall lack of attention to detail, any semblance of genuine emotion and a general malaise hangs over the whole production that a dark, wet cloud.  If anything new has been brought to this production, it certainly wasn't evident last Saturday evening.  The usual dancing pyrotechnics that choreographer Andy Blankenbuehler brings to his shows are surprisingly dull and half-hearted - there is no place in this show for his signature dancer-enters-walking-backwards-and-strikes-a-pose, and yet it happens time after time, and what follows time after time is uninspired and not all that inventive.  Think In the Heights Lite.

Visually, the costumes, designed by Susan Hilferty,  are standard and nothing more; the lighting, by Donald Holder, isn't even close to exciting or even interesting; and only the somewhat neat way of showing all the rooms in the Warbucks mansion elevates the set design (by David Korins) beyond cheap looking and boring.  All three designers are among my favorites, but their combined efforts here are more amateurish than Broadway. At best their work is utilitarian; at worst, their work is ho-hum and uninspired.

And acting-wise the adults in the cast are all over the map.  Clarke Thorell barely registers, let alone exudes any sense of danger, even comic danger, and poor J. Elaine Marcos has been directed to do a hybrid accent of stereotypical gun moll/floozy and the racial stereotype of the Latina bimbo.  And both use volume to substitute for real characterization. "Easy Street" is as flat as warm ginger ale.  On the other end of the spectrum, every time Brynn O'Malley is onstage, the whole show elevates in energy level.  She's smart, full of subtext (I love her chemistry with Daddy Warbucks) and actually interesting.  Ironically, she is so good it makes the fact that her role of Grace Farrell is woefully underwritten a crying shame. 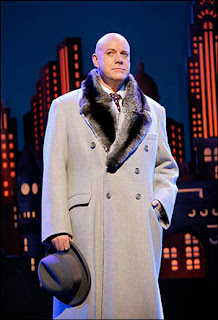 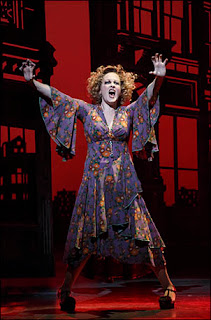 As for the adult leads, the quality spectrum is very wide.  On the positive end, Anthony Warlow's Daddy Warbucks is formidable, gruff and tough as nails.  Watching him dissolve into a lovable teddy bear, who aches from loneliness and whose heart breaks when he nearly loses Annie, is the biggest delight of the show. He is excellent in every way.  Sadly, the same cannot be said for Katie Finneran's Miss Hannigan.  She's shrill, obnoxious, poorly sung and bizarrely - not to mention highly inappropriate - hyper-sexual.  Has drunk ever been less funny?  Her Hannigan offers zero challenge to the orphans who run all over her like a welcome mat.  Sorry, Katie, you won't need to clear space for a third Tony Award this time around.

Even a terrific third string Annie and a great Daddy Warbucks can't save this bland trip down memory lane.  Bland, I could take, actually, but this half-hearted, half-assed attempt at theatre is just insulting, even for a chestnut like Annie.