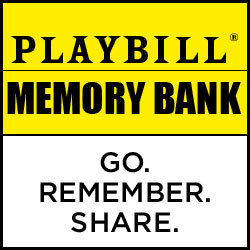 I know what you are thinking... Jeff is some sort of shill for Playbill.  I am probably on Playbill.com 10 to 15 times a day. I shop at the Playbill Store.  I research using the Playbill Vault.  Of course, like many (if not most) of you, I have every Playbill from every Broadway show I've ever seen.  Gosh, just thinking of some of the memories attached to those little magazines, each with unique covers, gives me goose bumps!

As technology and the need to "go green" inches ever forward in its march to obliterate all things tangible, just like records, tapes and soon, CD's, I'm pretty sure it's only a matter of time before ushers hand us small flash drives instead of little books.  (Or, more likely, we can get one for a fee...)

BUT if the newest Playbill site is any indication of show memories of the future, count me IN!  That new site is The Playbill Memory Bank, which you can get to by clicking HERE.  Part scrapbook, part historical record, with just a dash of social networking, this site has A LOT to offer theater fans.

Not that it is perfect just yet, I have to report that there are so many aspects to this thing that it is just a little intimidating just to navigate.  I find myself clicking on what amounts to the "home" key more often than I'd like, mainly because I can't always remember how to get back to a place once I've added something.  That said, once I got the hang of the aspects I use the most, it has become second nature.  I guess the whole thing would be simpler if there was less to do here, but I also can't think of one thing I'd omit.  Ultimately, any navigation issues pale in comparison to the benefits.  When it comes right down to it, this is a one-stop shop for preserving memories electronically, and so it is bound to have an issue or two as it is rolled out. 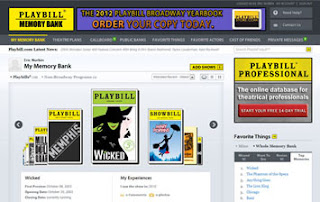 Perhaps the most obvious (and easily used) feature is being able to broadcast your activity on Facebook and Twitter.  You an also invite people privately or publicly to check ot your bank, share stories and send each other private email messages.  You can choose to be public (like I have - just search "public memory banks' and type in my name, Jeff Kyler - I'd love to hear from you!) or just have your private memories for yourself.  And you can let your friends when you are making plans to attend a show, too.

Instagram fans, rejoice!  Stage door pictures with the Newsies or of you and your besties hamming it up under the marquee for Phantom, or shaky footage from your cell phone as your favorite Broadway stars exit  the theatre all have a place in the Playbill Memory Bank.  Let's say you just saw Newsies for the 4th time.  You create a fresh "page" for this visit, and add your pics of Corey Cott signing your Playbill and Kara Lindsay hugging you as your click with your cell phone.  Upload them all!  And that hilarious video you made of you and your friends recreating "King of New York" in Times Square?  Add that, too!  Share it with the world or just your selected "friends." 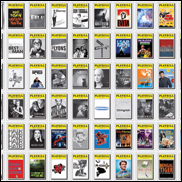 For me, though, the best aspect of the whole thing is the ability to keep a Playbill by Playbill accounting of every show you've seen.  You type in the show title, put in the date you saw the show, and the Playbill cover that matches that month comes up - especially great when there is more than cover!  I saw The Goodbye Girl right after it opened, and have the full color logo Playbill to show for it.  A few months later, I saw it again and got the Playbill with the black and white photo of Bernadette, Martin and little Tammy on it.  I put both dates in my Memory Bank, and there are both covers!

After you do that, you can write a review, rate it from 0 - 5 stars, tell who was with you, add your pictures and videos as I described above and even check out the cast who was in at the time.  Did you see an understudy?  You can add that, too!  It is really cool.

Are you a list maker?  List your favorite Broadway actors!  List the shows you want to see as a revival!  List those shows you missed and really regret.  And are you sure that Bernadette Peters needs to be the next Mrs. Lovett?  Make a "dream cast" list, too!

Grade: A- (There's always room for improvement, but what a great start!)

And DON'T FORGET!  Vote in this week's HOT or NOT: A Christmas Story Edition!  Click the show logo in the upper left corner of this blog, and be sure to complete BOTH parts of the survey!