I am absolutely thrilled to bring you the next installment of JKTS CHAT: 5 Quick Questions!  It has been my great pleasure to be talking with Eric Sciotto, who plays  Alan Eliot in the acclaimed revival of The Mystery of Edwin Drood.    In part one (click HERE), Eric spoke candidly about being a working-on-Broadway parent, and what it is like to work with his idol, Chita Rivera.  This time around, he talks about being a 3-time Gypsy Robe honoree and the perils of audience participation each night at The Music Hall Roayale, aks Studio 54!  And now, without further a do, here are...

Question 1.  You are the very definition of "Broadway gypsy."  What about your career as a Broadway dancer is the most rewarding?  Do you, like Bazzard/Bax in Drood, "long to play a larger part?"  What choreographer that you've worked with so far would most like to work with again?  Why?  Is there a choreographer or show that you really want to work with/be in?

Eric Sciotto: Wow! Thanks! I love being the definition of a "Broadway Gypsy!" What has been most rewarding? That could have lots of different answers: as a dancer, and creatively, what's been very rewarding is that I've had the great fortune to do extremely disparate styles of show... from 42nd Street to Rock of Ages.  I love that I've been able to do pulled-up-classic, and down-and-dirty.  I LOVE that I've had a "chameleonic" career for lack of a better term.  That goes for the singing too.... classic sound to scream-y rock!  That's been really fun....to be a ton of different types of people!  As for the parallel to "Bazzard/Bax".... his character "understudies Clive Paget in the role of John Jasper..." And that's what I do and have done a ton of! Understudying!  I actually call myself a "Career Understudy."  I'd be lying if I said I never wanted to play another role of my own again, but I LOVE understudying!  LOVE IT!  And I've covered a lot of roles and a lot of really cool people!  It's very rewarding creatively to keep working on something else whilst running a show in my own track.... it keeps that newness alive for me.  And stepping into a role is very fun and satisfying for me.  And I feel very confident in my abilities to do that.  What Choreographer would I love to work with again?!  Well, I have two answers... one is Warren Carlyle, who did DROOD!  He's awesome and so creative and I feel like we barely got to do much, since Drood is not really a heavy dance show... but he's wonderful and I really hope to work for him soon again!  Now, from my more distant past: Wayne Cilento!  I did AIDA with him and also replaced into his SWEET CHARITY.  I loved working with him.  He's so intense and energetic and works so hard that he immediately inspires me to be better and go farther and push harder.  AIDA was only my 2nd show, and I really learned a lot from him.  I'm dying for him to do something new and I will try my damnedest to get cast in it!!!  I'd also love to go back into Rock of Ages at some point, even if only for a few weeks.  I LOVED it there and I really had a blast performing that show! 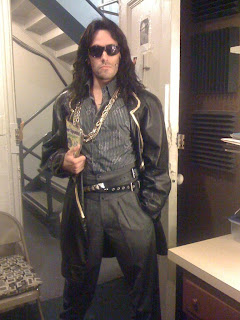 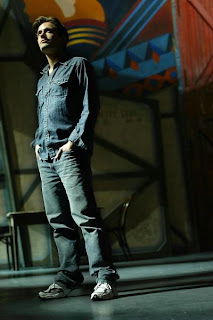 Question 2.  You were the recipient of the Gypsy Robe on opening night of The Mystery of Edwin Drood.  Explain why this is such an honor for a dancer.  How great was it to get it when you were working with your idol, Chita Rivera, who is, I'm told, a gypsy at heart?  What is Drood going to add to the robe?  Who did you hand it off to?

Eric Sciotto: Yes!  I'm so honored to have gotten the Robe 3 times!  The first was special because Lisa Gajda (who has more credits than anyone on the planet) deferred it to me for Pal Joey.  She had had it and wanted me to have it!  Such a great friend!  I was surprised and honored! Then, I got it in Priscilla and now Drood! I feel like it really hammers home that I'm a "lifer."  That I've done a lot and am worthy of being here.  As I said before, working with Chita is a DREAM!  And the fact that she started as "just" a dancer and is truly THE GYPSY of the UNIVERSE, it was really special to be awarded the robe in this show with her!  I mean.... [head explodes] As for adding to the robe.... AEA had someone do the Pal Joey panel because my son had just been born, and it was not possible for me to spend the time creating the panel.  I do sew.  I'm a quilter, actually, and make things all the time (as time will allow).  I'm VERY proud of the Priscilla panel which I made in my dressing room between shows, and it took a long time.  I hope to be the one to do the Drood panel, but I now have TWO kids, one of whom is 10 months... so there's not a lot of extra time to do anything... I'll have to do it at work, between shows, after I make all the Christmas gifts I need to make. But I have a few ideas.  Simple. Clean. Classy.... we'll see....  with so many opening nights this month, I gave the robe 2 days later to Carlos Encinias at Scandalous. EXCITING!  I think it was a 5-way tie there. (the robe is given based on the number of chorus contracts you've done on B'way...) and so it was up to me to choose.  I ['ve known] Carlos for a long time, and he's a new dad too... so I felt it was the right choice!!! 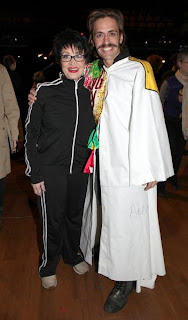 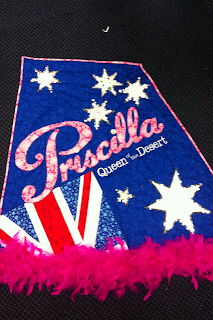 (Left) The Robe AND The Idol: Chita Rivera and Eric
(Right) The Priscilla Robe panel created by Eric
(Photos by Eric Sciotto)

Question 3.  Drood seems like a great show for the ensemble.  What is your favorite dance moment and/or scene in the show?  Why?

Eric Sciotto: There's actually not much dancing in the show - it doesn't call for it.  My favorite moment is actually the Christmas Dinner scene. I'm a waiter... I stand around a lot.... but I LOVE watching the leads in that one.  First of all, I think it's the best scene and song in the show..... so much going on, tempers are high, stakes are high, everyone's in an uproar and we see, in quick shifts, their outer lives and their inner thoughts... all in quick-cuts.... Also - it seems to be the scene with the highest likelihood of a giggle-fest.... so it's VERY entertaining to watch.  I bite my lip a LOT in that one....

Question 4.  Part of your role is to get the audience engaged and participating from the get go.  I was fortunate enough to be in your section the day I saw the show, and you are a riot!  Do you do the same thing at each performance, or do you tailor it to the crowd?  How?  What are the challenges of dealing so directly with audience and how do you deal with them?  Do you ever wonder why the group you poll seems to lean toward a certain character? (Our section gave the most votes to the obvious choice - John Jasper.  I was shocked!... He didn't win, Bazzard did.)


Eric Sciotto: I will be honest.... I do not care for audience participation.  I don't like it as an actor and I don't like it as an audience member... but it's part of the job... so I do it.... and it's growing on me.  I don't have a script for my "schpeil."  I have key points that I need to hit and just vary it from there.  I have a VERY short time to chat with my section, because I enter from onstage at the top of the opening number... so I think I have 90 seconds.... unless I go up a little early.... so I don't have the same chatty vibe that a lot of the others can have, because several of them start the number from their section.  I find the audience can be all over the map in terms of being receptive to my speaking with them... some days I get to my section and I see eager happy people that giving off "Yay! This'll be fun!" vibes and others where it's like they collectively fold their arms and look away.  I try to disarm these less than enthusiastic crowds by acknowledging in a polite and charming and fun way that they're "clearly not excited about being spoken to... but that it's my job..."  And I often say "no one else will bother you for the entirety of the show, until I do when I return late in act 2...." That way they don't have to feel guarded the whole time....  But OFTEN, I have a fun and rowdy section who delights in yelling "Drood!" and even seems to interact with me from the stage!  I include and refer to my section throughout the course of the evening... and as I'm sure you know "Alan Eliot's section is THE BEST section in the entire theatre!!!!" The voting is always varied and often surprising!  I can sometimes feel from earlier reactions during the show that so-and-so will get a lot of votes.... but it's not fool-proof... and it's surprising to me a lot.... and the voting is real and not rigged.  So, it's fun!

Question 5.  Given the participation aspect of the show, I imagine it is difficult on nights when the audience isn't so verbal.  And I also imagine that sometimes they can get out of hand (maybe the cast can, too!).  How do you all deal with a "dead audience"?  Can you share a story or two of something unexpected that has happened at the end, either from the audience or the cast on stage (or both)?

Eric Sciotto: We've definitely had the "quiet and polite" type of audience... the certainly love it at the end, but are more "listeners" rather than willing participants throughout.... How do we DEAL with it?  We do the show.  We just keep it moving.  It's less fun for us, but our job is to do the show.  Out of hand?!  We've definitely had some pockets of  very... shall we say SPIRITED people!  But that just adds and has never detracted from the overall experience.  As for unexpected happenings.... ummmm.... the other night, when we started the voting-by-applause for Datchery, the chairman passed the proverbial torch to "Mr. Throttle" and the audience applauded for Throttle instead of waiting for Throttle to wave the handkerchief over the head of the first candidate for the role.  That was really odd to us, and had never happened before....