NOTE: What follows are my personal opinions.  Agree with me or disagree with me as you like.  I invite your thoughts. 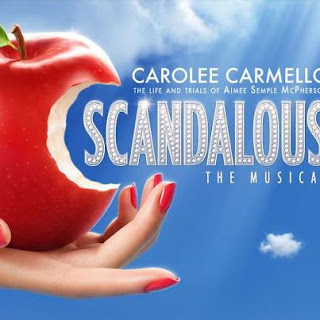 I've let this fester inside me since those fateful two and a half hours (that I'll never, ever get back) the night that I witnessed Scandalous.  Even as I type this, I am resisting the urge to delete the whole thing and just take the high road.  I rarely respond to negative criticism for my reviews (or any praise I get, for that matter).  After all, reviews are the considered opinions of the people who write them.  Who am I to deny you your opinion?  But I really have to address the response I got to my review of this particular musical.

On the plus side, I have gotten many an email in agreement with me, and not a few that say I was still too kind.  On the negative side, I've gotten several emails that have called me everything from a "a talent-less hack who criticizes because [I] can't do theatre" to a "gay scourge that represents all that is wrong with society today."  I'm told I couldn't recognize talent "if God himself introduced [me] to it."  And I'm told I'm "just an atheist with an ax to grind against a good Christian like Kathie Lee Gifford."  I found something interesting: 100% of the supportive notes I've gotten were from people whose interest is purely in musical theatre.  And 100% of the negative email I've gotten bring up religion, God, and my "poor" relationship with Him.  Folks, my religiousness has nothing to do with how rotten - and I mean rotten - Scandalous is.

I'd like to think I have a pretty thick skin about this stuff, but then a few of you zealots felt the need to get personal.  (I attached one of the "cleaner" hate mails to my review, along with my response.  Click HERE to see that.  Please come back!)  After the sting subsided, I went back to those other religious-themed emails, and I noticed something interesting, if not entirely surprising.  EVERY SINGLE ONE OF THESE "CHRISTIANS" - 100% - paired their religious feelings and Bible quotes with venomous, personal attacks on my character.  Hypocrisy at its absolute finest.  EXACTLY why I don't trust most of the so-called believers that I come into contact with in my everyday life.  I have zero respect for people who preach but can't live by their own so-called set of high morals and family values.  I not only have no respect for your kind, you literally make me sick to my stomach.  That said, even as un-religious as I am, I hope all of you hypocrites find what you are looking for, though if it actually is what you think it is, you'll be in Hell right next to me.  Yes, that very same Hell you have threatened that I will end up in if I don't see the evil in my ways and fix it!  (WWASD? - What would Aimee Semple do?)

Visit NBCNews.com for breaking news, world news, and news about the economy

And as for Ms. Gifford, consider this:
I don't get to church much, but last I heard, lying is a sin, Kathie Lee.  I learned that from my parents, the same ones who your minions claim abused me, causing me to hate your little skit.  Would that all kids suffered the same "abuse" then.

The only honest thing you really had to say was that your cast is terrific.  Yes, they are, and God bless 'em, I hope they find steady, good work for years to come.  May God grant them a creative team and producers who know how to put on a musical the next time.  And I hope, once you are done shedding your tears and shaking your head at how "no one gets" your show, that you will take the time to reflect and be honest with yourself about the extraordinary opportunity you were given and totally messed up.  And maybe you'll find some actual humility and get rid of that desperate attention whore that I saw making a scene-to-be-seen sitting in row J, seat 101.  Your minions who think I'm a Godless, lost soul should note that I started this with praise and ended with genuine pity.

No hypocrisy here.  I hated Scandalous, I stated clearly several reasons why, and I stand by my words.  And all without a fake, self-deprecating smile on my face.