I don't know which would be worse: understudying a star-turn role or being a replacement for a popular actor. Understudies are a part of the business. It would be unrealistic to believe that any actor could go months without a day off for whatever reason. But when one understudies a role and performer that have taken on mythic proportions, the task must be harrowing to say the least.

Let's take a moment to salute the understudies who valiantly went on even after half the audience asked for a refund or simply groaned at the pre-curtain announcement. One had to feel especially bad for Lenora Nemitz (a seasoned professional with a sterling reputation) who had the "luck" to understudy Patti LuPone as Rose in Gypsy. She valiantly went on, suffered through a rocky performance, and another understudy was hired. Talk about your double-whammy!

A more recent understudy "event" happened at the very next performance of next to normal after Alice Ripley won the award for her universally praised performance. That performance had Ms. Ripley out and her understudy, Jessica Phillips in as Diana. The chat rooms were abuzz, naturally, with reports as widely varied as "the theatre cleared out and half the audience demanded a refund," to "She sucked!" to "I thought she was brilliant!" I mean, I understand the disappointment, but really, must we assassinate poor Ms. Phillips' reputation. And the performance, I understand, was nearly full - hardly a stampede out of the Booth. 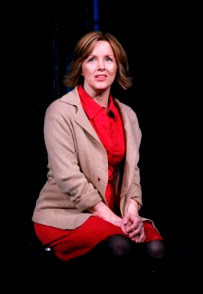 That night at next to normal, another inevitable phenomenon happened when Kyle Dean Massey took over the role of Gabriel from the red hot (as performer and sex symbol) Aaron Tveit. People caught unaware, I am sure, were disappointed, though in this day and age of BroadwayUnderstudies.com, Twitter, etc., I'm not sure how anyone could have missed the long planned for departure of Mr. Tveit. (He returns to the show Tuesday night, by the way.) 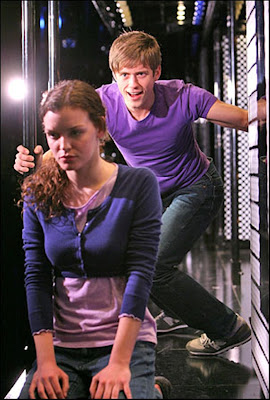 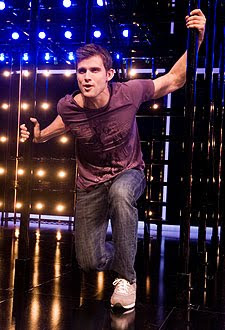 As it would happen, I had the opportunity to sample both the understudy and the replacement this summer. I had purchased my ticket for the purpose of seeing Mr. Massey in particular, as he is an up and coming actor that I admire greatly. I was not disappointed, and neither, it seems, was the audience, as he was greeted with enthusiastic applause at curtain. I enjoyed his performance because he did things with the role that Mr. Tveit does not, which I love. Seeing different interpretations of the same role can be thrilling (Billy Elliott, anyone?). Massey may have lacked sheer vocal power - he simply doesn't belt out "I'm Alive" like Tveit. But what he lacks in power, he sure makes up in nuance. He interprets the words to the songs, adding layers of meaning both to the plot, outright, and to the symbolic nature of the role. I look forward to seeing Aaron again, though, because I missed the evil, menacing edge he brings to the role.
Imagine my surprise upon opening my Playbill and out drops the little slip of paper that strikes fear into every theatergoer. "At the performance, the role of Diana will be played by Jessica Phillips." As someone who must travel to the city with a certain amount of pre-planning, I was not in a position to ask for a refund or exchange. And I was curious to see what anyone could do in the face of a legendary performance, like Ms. Ripley's. There were the malcontents, demanding to know why more notice wasn't given. One rather rude lady announced loudly from her 6th row center orchestra seat, "I didn't pay $150.00 to see the second string!" ($150.00, really?) A little snooping after the show, aka kissing up to the head usher, got me some interesting information: at that performance only 6 people asked for a refund/exchange. Even more interesting: nearly everyone of the others who complained to management came back to say they were glad they stayed!
I sure am glad I stayed, too. Ms. Phillips was excellent! What a voice - her "I Miss the Mountains" was amazing. What an actress! She played the role very differently - she was actually very funny at the start, almost like we were seeing a sitcom. But what made it work was the way she played off each laugh, like she was being funny to protect her family. Her face after every joke betrayed a woman fully aware that she is sinking fast. The result was an immediate bond between Diana and the the audience, which made for very different reactions as she begins her descent. The difference is that with Ms. Ripley, Diana takes up the majority of the show, so huge and powerful her performance. With Ms. Phillips, Diana is a huge part, after all, she is the focus, but she also allows us more of a chance to know the rest of the family. Ultimately, the result with both actresses was the same: you feel deeply for this woman. So, the next time you are at a show and the little white paper comes sliding out, don't think the worst! Who knows? You might just see a star of tomorrow.
Share your understudy experiences! Add a comment below.
Jeff

(Photos: Production photos from next to normal by Joan Marcus. Photo of Jessica Phillips is a candid from a Broadway in the Park concert, Summer 2009.)
Posted by JK at 8:41 PM