One trend that doesn't seem to be dying is the "let's-turn-a-hit-movie-into-a-musical". Just today, it was announced that a lot of Broadway heavy weights - Tony winners Lin-Manuel Miranda (In the Heights), Andy Blankenbeuhler (In the Heights) and Tom Kitt (next to normal), Jeff Whitty (Avenue Q) and Oscar winner Amanda Green ( High Fidelity, "The Rose") - are joining to write Bring It On: The Musical. So far, they are saying it is just the title they will use, and a completely original story by Whitty. God knows he is creative enough, but you have to wonder how audiences that come expecting a story they love and get none of it will react. I hope it is so good that there are lines around the block for years to come.

That announcement is not really a big surprise, considering that this year another movie-turned-musical won the Tony and is raking in the cash. But it is no sure thing, right? For every Billy Elliot or Hairspray, there is a High Fidelity and 9 to 5. And those that are incoming are big question marks, even after out of town try outs. The First Wives Club: The Musical seems to have dropped off the radar completely, despite its top notch cast. And Catch Me If You Can: The Musical is still listed as "Broadway-aimed" but have we heard a word about it? No. 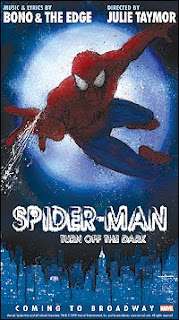 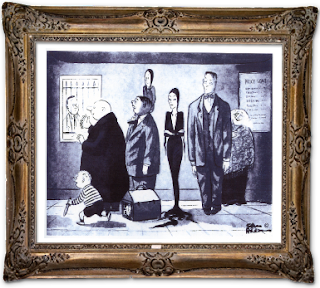 Then there are two musicals (I hope) still coming in this season that might cause some confusion for movie lovers. Both The Addams Family: The Musical and Spider-Man: Turn Off the Dark are based on original stories about the original comic characters, NOT the films that are/were so popular recently. Which brings me back to Bring It On. I'll bet they are watching all of these shows carefully...

(Photos from Playbill Online, and the websites for Spider-Man and The Addams Family)
Posted by JK at 7:42 PM