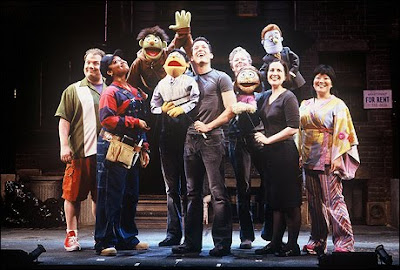 For six years, Avenue Q has been the sweetest address in Manhattan. I, like a lot of people, fell in love with a show that was an interesting curiosity before the lights went down and "The Avenue Q Theme" started. A mixture of comedy, slap-stick and sentimentality, Avenue Q really hit a part of me that until then I managed to keep hidden. Like so many people in the middle of the Generation X/Y time period, I was moving forward rapidly with my life, but feeling underneath it all kind of empty and lacking purpose. The show allowed me to feel and explore those feelings unashamedly, but with the "safety net" of the story being told by a bunch of puppets and larger than life "real" people. It channelled my childhood of watching hours of another street on TV and expanded it into much larger problems, joys and issues I found from adulthood. What I learned from Bert, Ernie and Big Bird was now growing up with Rod, Nicky and Trekkie Monster.

The "in between scenes" on the monitors were an instant throw back to the same thing I remembered from long ago; the miniature furniture and scale props brought back even more memories. I laughed til I cried at such blunt honesty as "The Internet is for Porn" and "Everyone's a Little Bit Racist." But it was the other kind of tears I shed that really, in retrospect, made Avenue Q the show that meant so much to me: "I Wish I Could Go Back to College," the bits with Christmas Eve and Rod coming out, the sadness of Kate Monster in "A Fine, Fine Line." But the single moment that most resonates with me, and brings me to tears even thinking about it is the very last moments of "Fantasies Come True," when Rod and the audience realize at the same time that it was all just a dream. The inevitable sigh of sadness for Rod that every audience I sat in was moving all by itself. I am certain that that moment caused more than one homophobe to change his mind about gay people. 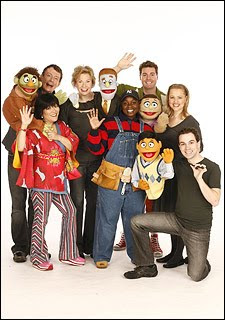 Anyway, for six years other shows have come and gone, as they must do. And it was nice to have an old comfortable neighbor to visit once in awhile. Now that neighbor is moving on, and it is sad, but aren't we all just a little bit better for having had Avenue Q in our lives? I think so. I just hope that the little hole in my heart that is there is, like the song says, "only for now."