CD Review: next to normal

Here's my two cents worth on the Original Broadway Cast Recording of next to normal: 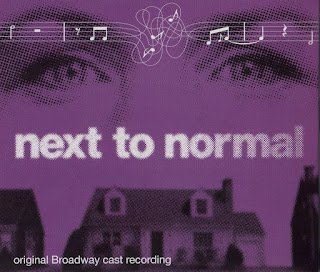 The Show Itself:
next to normal is about every family, really. And while this family struggles with mental illness, there is a beautiful universality about the piece that allows all of us to relate somehow. Such is the power of great art, which this is. Being next to normal is so much better than being 'normal.
The Company:
With only six members, it may seem like major hyperbole to say that this cast represents the best of the entire musical season, but it is nevertheless true. With no room for a weak link, the cast has truly become one, feeding off of each other to present as best they can a difficult but clearly meaningful for them piece. Each knows, obviously, that they are in the rarest of positions - creating roles in a Broadway musical that will be talked about for seasons to come and one that is sure to become a staple of the American musical theatre scene.
The Book and the Score:
A rock score throughout, Kitt and Yorkey also venture into some jazz, classical, country, pop, and even a little dab of traditional Broadway. Not to mislead here, they are not throwing everything they know into one show; each musical style completely fits the exact moment it is used. And within these various stylings, one never gets the feeling of a pastiche score (like Starlight Express or Joseph…). No, each musical style is so specific to the moment that each is treated like a score of its own - complex when it needs to be, simple at other times, but always interesting to listen to, and always adding to the emotion of the piece. Perhaps best of all is the fact that for all of this emotional guidance, one never feels manipulated or like you've been there, done that. This is a score that will bear repeated listening, and a show that will likely become richer with more viewings.
The Recording:
One thing that seems to stand out about all of this season's cast recordings is the equal quality each has between production, sound and re-creating the songs as if they were being performed on the stage. next to normal certainly fills that bill. The sound is crystal clear and the vocals perfectly balanced, particularly of note as the score represents a wide range of styles and, accordingly, volumes. Being able to concentrate on the songs for their tunes and lyrics without the visual importance given the staging only supports my initial theory that this score is one that bears repeated listening both for meaning and sheer enjoyability. The orchestrations by Michael Starobin and Tom Kitt are as wonderful in recording as they are live on stage, and it is evident why the team won this year's Tony for Best Orchestrations, a fete considering that it is written for a mere six musicians, and yet feels so much fuller. Of course, it is also evident why the score beat favorite Billy Elliot for the Tony in that category. Between the stylized production segments - "Who's Crazy/My Psychopharmacologist and I", "Make Up Your Mind/Catch Me I'm Falling," the powerful stand alone numbers - "I Miss the Mountains," I'm Alive", and the all out rock numbers - "Superboy and the Invisible Girl," "Wish I Were Here," and the closing "Light" the score has complete emotional range, resting comfortably in what are now accepted Broadway/rock stylings, while still pushing the boundaries.

The entire company (Alice Ripley, J. Robert Spencer, Aaron Tveit, Jennifer Damiano) shines here as they do onstage, each committed to preserving their stage performances rather than creating some sort of hybrid for the disc. What is nice, too, is that the lesser characters - Adam Chanler-Berat's Henry and Louis Dobson's Doctor Madden come across as equally important, which they are. 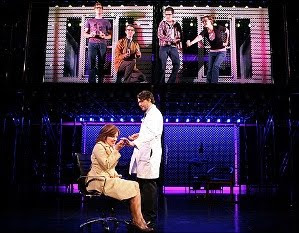 Songs That Stand Out:
Keeping in mind that the entire score is noteworthy, the songs I find myself going back to include: "Who's Crazy/My Psychopharmacologist and I", "Make Up Your Mind/Catch Me I'm Falling," "Superboy and the Invisible Girl," and the unlikely "Perfect for You" and "Hey" sequences. But mostly, I enjoy it from start to finish, over and over.
Grade: A+
Jeff
(Photo: "My Psychopharmacologist and I" by Joan Marcus.)
Posted by JK at 11:03 PM