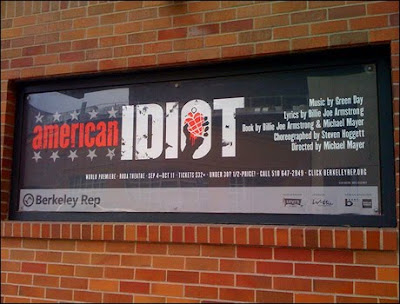 I was driving to work this morning when I heard the new Green Day single, "21 Guns." It is a catchy tune, full of meaning, and reminded me of a show tune. Well, it might be, actually, as the new musical from Spring Awakening's Michael Mayer is a show comprised of every song on the Green Day album American Idiot, plus, I believe, some songs from their current CD, 21st Century Breakdown, which includes the aforementioned "21 Guns." I'm going to go out on a limb here (LOL) and guess that if anyone can make this project work it will be Mayer and company - including Tony-winner John Gallagher, Jr., and a few other Awakening alums (Gerard Canonico, Brian Charles Johnson) plus the vastly talented Mary Faber, star of Saved and one-time Lucy the Slut/Kate Monster in Avenue Q, along with another vastly talented young woman from the vastly underrated Saved, Morgan Weed. Then, of course, there are the terrific Matt Caplan from RENT, and Andrew C. Call, one of my favorite new actors (Cry-Baby, Glory Days, High Fidelity - yes, I actually saw him in all three, and I hope this show will break his string of bad luck). Clearly, this thing has a terrific cast to support it. It looks like it is already doing well - a three week extension was granted before the first performance.

The concept (for a stage musical) album certainly doesn't start here. No, The Who's Tommy, Jesus Christ Superstar, and a few others beat them to the punch. But the members of Green Day insist that the album was always intended to have a narrative, and this fleshing out into a full musical was never NOT an option. Of course, musical pundits, critics and fans will be watching closely as this new/old trend reignites. Has the "jukebox musical" evolved yet again, only to revolve into the "original" jukebox musical? Stay with me here: The Who's Tommy (concept album) to Mamma Mia! (song catalogue attached to new story) to Movin' Out (song catalogue attached to new story, told through dance)to Jersey Boys (song catalogue attached to life story of the artist)to American Idiot (concept album).

And watch out, trend mongers: long before American Idiot started making headlines, Michael Jackson's Thriller/Off the Wall albums were optioned for a musical. Which leads me to a question for you: What album, including every song on a given album, do you think has the narrative chops to become a stage musical? My choice:

I can only imagine what Andy Blankenburhler or Sergio Trujillo could do with this one! Jerry Mitchell?

(Photos of the Berkley Rep marquee by Andrew Ku from Playbill Online.)
Posted by JK at 10:04 PM