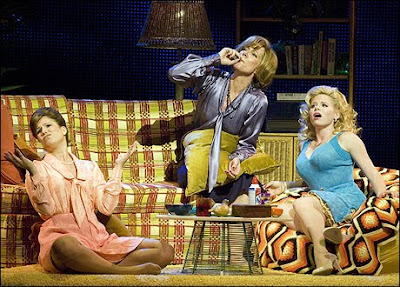 It is a somber feeling when a show closes. And this weekend, 9 to 5: The Musical closes up its corporate offices to hit the road sometime next year. Rumor has it that it lost all or nearly all of its $14M investment. Was it great? No. Was it fun? Absolutely. As a fan of the movie, I enjoyed it quite a bit, as line after line and scene after scene reminded me of the film I so love.
So why didn't it work? A lot of people blame the dated quality of it. Hogwash! Does that mean that Les Miz is dated because it includes the antiquated notion of being jailed for stealing bread? No. Well, 9 to 5 has been labeled such for its outdated notion of women in the workplace and sexual harassment. Um, it takes place in 1979, folks. If the jokes about a Xerox machine and an electric typewriter can be funny for their old-fashioned-ness, why not jokes that clearly paint the bad guy bad? Cringing at lines about "getting my hands on those double-D's" and being a "typewriter with tits" is, I think what the authors (women, both) were going for. And as for universality, who can't relate to a having a boss you hate or not liking the new employee or not getting the credit you deserve in the work place?
I think it failed mostly because it didn't take advantage of theatrical conventions instead of putting on a near replica of the movie adding only songs (for the record, pun intended, I like Dolly Parton's score a lot, and play some of the songs frequently - "Around Here" is one catchy ditty!). The best screen to stage adaptations embrace those things which a movie can't do... look at the staging of The Lion King or Hairspray or Thoroughly Modern Millie. Hits and Tony winners, all. And none a faithful recreation of the movie from which they came. 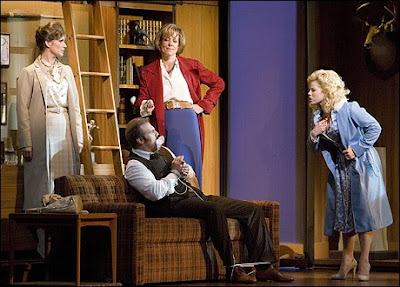 JK Liked:
- The stars of the show: Allison Janney, Megan Hilty, Stephanie J. Block, Marc Kudisch and scene stealer Kathy Fitzgerald.
- The score by delicious little Dolly Parton, especially: “Around Here,” “Rise Like the Sun,” “Get Out and Stay Out,” and, of course, “9 to 5.”
- The few scenes that broke the film mold – “Heart to Hart,” the opening number, “9 to 5,” and the theatrical way the marijuana hallucinations were presented.

JK Disliked:
- No risks were taken in making the script more theatrical.
- Joe Mantello’s bland, pedestrian staging.
- Andy Blankenbeuhler’s disappointing choreography – repetitive, nothing new.
- The giant electric board that substituted for scenery – distracting and way out of place modern for what is now a vintage time period, 1979.

It is sad to see so many folks losing a job on Labor Day weekend; talk about irony. I have a feeling, though, that 9 to 5: The Musical will play well in middle America, and hopefully recoup some of its money. They could have saved a bundle just eliminating that light wall. I bet that won’t travel.