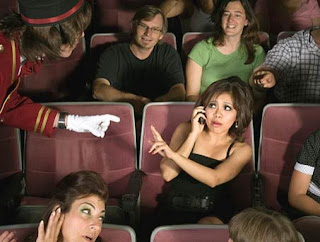 I know I am not alone in this... no matter how cute or matter of fact they are about announcing reminders to silence electronic devices, someone in the audience"forgets" or simply ignores the reminder. Then, shock of shocks, the damned thing goes off. And naturally, as it is dark, the offender can't find the device so it continues to ring. Then, as the device is brought out in the open, it rings louder as the person fumbles to silence the thing after all. Unless that "person" is the idiot who answers the phone and starts talking!
Yes, I've seen that not once but twice. And I am sure the touring company of Spring Awakening loved having "Touch Me" so nicely interrupted. Fortunately (?) the other instance was during "The Angry Dance" of Billy Elliot, so only those of use immediately around the fool were annoyed by it. It is so much a part of the theater-going experience that it is an actual topic for each show in the Playbill Yearbook!

Of course, theatre legend and modern technology have come together in making this serious breach of etiquette (let alone basic politeness) a very public argument, which not only applies to cell phones, but flash pictures (you have to have heard the tirade of Patti LuPone when some snapped a photo during Gypsy) and texting (I understand the cast of Hair actually takes the things and turns them off for you when they are in the audience, and that the cast of next to normal will also stop the show for texting, especially in the up close seats which are practically onstage seating). Richard Griffiths of Equus and The History Boys has notoriously refused to continue until the offenders are booted from the theatre. And just today, TMZ.com posted a video of Hugh Jackman addressing a phone call in the audience during a performance of his new play, A Steady Rain. He did it in character, class act that he is. (I wonder how he feels about being taped?)

http://www.tmz.com/2009/09/28/jackman-and-craig-can-you-hear-us-now
I mean, I love myself and have a healthy ego, but is anyone that important that they have to be in contact during a show to take calls or answer texts? Please!

Weigh in on this with a comment below!
(Photo from Getty Images)