Can you believe another week has flown by already? Lots of little stuff to talk about…

WHAT YOU MISSED THIS WEEK:

My thoughts on the revival of Finian’s Rainbow PLEASE VOTE IN THIS MONTH’S POLL!!! ---->

“Creature of Habit”: Well, as sure as I said I’ve seen her every time I’m in the Edison Hotel/Café since In the Heights opened, I did NOT see Priscilla Lopez getting her matzo ball soup or running to the theatre. The name of the Broadway gift shop that I can never remember that is across the street from The Phantom of the Opera is called Theatre Circle! Couldn’t get near the Gods of Carnage to check out the pictures of the new cast of that Tony winner – but the sign people at Memphis were putting up some new stuff outside the Shubert, including a great quote about Montego Glover and a beautiful picture of her, and a reprint of an AP article that sings the praises of this awesome new show.

"REVIEW: Finian's Rainbow":I have corrected an error in my review of Finian’s Rainbow. Seems that sweet deal on Wednesday evenings is no longer available.

"Tony Race Over?": And in my angst over an article declaring that Ragtime would win the Revival Tony before the season is half over, I managed myself to forget the revival of La Cage aux Folles which opens this spring at the Longacre. My apologies to anyone associated with that show. 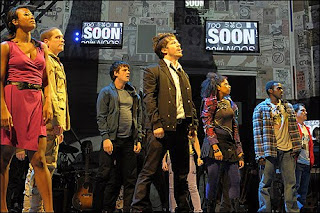 I hear that Green Day, whose albums American Idiot and 21st Century Breakdown, are the basis for the Broadway-aimed (I love that term!) American Idiot, are back in the recording studio with their original cast creating a new version of their current hit, “21 Guns.” Very cool! 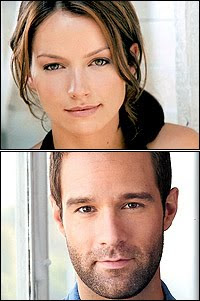 ELSEWHERE ON THE WEB

Here is a link to a great interview with Girl Crazy’s Becki Newton (Ugly Betty) and her husband/co-star, Chris Diamantopoulos (The Full Monty). They are great separately, and sound like great fun together! And they couldn’t be cuter… his eyes… her sly smile…

Ugh! It was so much easier when only one network carried the Macy’s Thanksgiving Parade. If you can think of a way (I don’t have a DVR) that I can see both the NBC and CBS broadcasts, please write! I want to see all of the Broadway stuff…

Is anyone else as thrilled as I am that they are giving Carrie: The Musical another go-round? Surely you’ve heard about the star-filled reading they are doing of a revision of that notorious flop… Marin Mazzie, Sutton Foster, Jennifer Damiano, and newcomer Holly Ranson (as Carrie) are in the cast; they must be serious. Apparently, the writers have made many cuts and written a lot of new material. This could end up on my “On the Radar”…

And another 80’s flop (though certainly much longer in run and in regional theatre. Looking forward to hearing about what Victoria Clark, Andy Karl and Kathy Voytko did with it! Broadway-aimed? We’ll see! 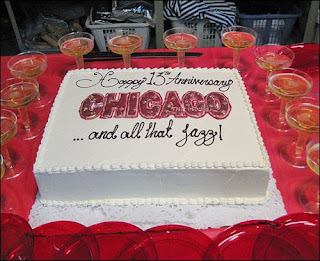 Happy birthday, Chicago! The revival turned 13 on the 14th! Congratulations!
Posted by JK at 4:14 PM