The One That Started It All

I was doing my usual rounds of the major theatre websites yesterday and noticed in the blog section of Playbill.com that there was an entry about the play that changed your life.

My mind immediately went back to that exact moment... August 20, 1983. It was the Saturday matinee of the first-ever revival of Mame, starring Angela Lansbury and many members of the original cast. The theatre was the modern, elegant Gershwin Theatre, that I knew had just recently been renamed from the former Uris Theatre, home to another Lansbury vehicle, Sweeney Todd. I was in 11th grade and on a trip for officers in the school drama club (I was the treasurer) and we went to see this show because 1) our director was in love with the character Mame, 2) because our director wanted to do the show Mame and 3) she (our director) felt that since it was the first Broadway show for all of us, a classic with a classic star was the way to go. Years later, I found out it was because she couldn't get 6 tickets to Cats... I might not be writing this had that been the case.
Anyway, as it is probably clear, I had already been involved in drama in school. I enjoyed it, but it wasn't a passion, beyond secretly gathering a small collection of Broadway "soundtracks" (as I unknowingly called them then) including both Mame and Sweeney Todd. My infatuation with Miss Lansbury was in its infant stage.
And so, here is why the 1983 revival of Mame changed my life forever.

1. I didn't know as much then as I do now, so everything fascinated me, including the realization that the Gershwin Theatre (Circle-in-the-Square was a school only then) was a separate building, NOT on Broadway and NOT part of a long street that is huge theatre after huge theatre.
2. Going into the Gershwin was a grand affair... a huge entrance, giant escalators and stepping down into the orchestra seats. It wasn't until my second Broadway show, Cats, that I found out that most theatres have tiny lobbies and squished together seats.
3. The usher actually walked us to our seats, and handed us Playbills (seat Orchestra Row S, Seat 116 - $27.75!).
4. Waiting for the overture to start seemed like an eternity, but the growing volume of voices anticipating the same thing was intoxicating.
5. When the overture started, two things happened: the dark blue curtain magically lit up in a sparkly New York skyline and I found out that the orchestra doesn't necessarily play exactly what you memorized off a record! 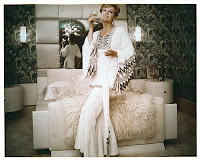 6. Mame was the very first show I saw that has a grand Star Entrance, complete with applause that stopped the show. Angela, playing the bugle, slid down the spiral staircase! Amazing! (I think, now that the rosy colored glasses are off that she was actually on a tiny seat that moved her down the railing, but it was thrilling nonetheless!)

7. Mame was the very first show that I ever saw with automated scenery that moved without obvious help from the wings or with help from visible stagehands or even the cast.
8. Mame was the first (and still only 1 of 3 I've seen yet) show that I ever went to where a song got a standing ovation - Angela and Anne Francine as Vera blew the place apart with "Bosom Buddies."
9. Mame was the first show I ever saw that I said, "I want to see that again!"
10. Mame was the very first show that caused me to mourn its passing. I had no idea that something so glorious and well- received (the standing ovation at the end lasted FOREVER!) could be such a flop. The show closed 8 days later. I was depressed for months. I actually worried about Angela Lansbury getting her next job. Who knew that about a year later, she would be in my living room every Sunday night for more than 10 years? She got the lead in a little TV show called Murder, She Wrote.
I guess no one forgets their very first anything, but this served to transform something I liked into a passion for life. Since then, several trips a year to Broadway are just a natural part of my life. And without a doubt, taking people to their first Broadway show is my favorite experience ever.
And so that's why Mame changed my life forever.
Jeff
For more information about the impetus for this blog go to: http://www.playbill.com/playblog/?p=2305
Share your life changing experience - add a comment below!
Posted by JK at 2:18 PM