OK, it is probably hard to believe, but I hate, loathe and despise Halloween. What? You are asking yourselves incredulously...a theatre fan/gay guy who hates Halloween? No way! I hate the thought of dressing up to schlep for candy, begging, really. And the humiliation that your costume isn't good enough or that people can't tell what you are. Yes, the scars still hurt from when I was 7 or 8 years old. But as I grew older, I began to resent that the very same people who called me names and teased me about wearing a costume and makeup for shows I was in, for a free pass to do the EXACT same thing in the name of a stupid "holiday!"
But I digress... that above is not what I'm writing about today. This year, with Halloween on a Saturday, I decided to "treat" myself by catching a show in NYC. So I hopped on the train, ticket to Rock of Ages in hand. I'll tell you about THAT experience tomorrow. Suffice it to say that I didn't manage to completely escape the costumed idiots of my childhood this year.
On my way up 7th Avenue from Penn Station, I reviewed the discounts for show tickets I had in hand... Brighton Beach Memoirs, Finian's Rainbow, and at the last minute, a flier for Fela! Well, I just adore one Miss Laurie Metcalf almost as much as I adore the plays of on Mr. Neil Simon, and lo and behold, the first box office I came to was the Nederlander Theatre where The Neil Simon Plays is playing. Man, that theatre looks nice without the RENT grunge. So I walk right up to the man in the window, thrust my discount paper through the little hole and say, "give me the best you got for November 11th's matinee!" Well, you could have knocked me over with a feather when he told me that the show was closing the next day. "Um, can I use it for Broadway Bound?" I stammered, shocked and sad and feeling stupid all at once. "Sorry, son, they are closing the whole thing. But, we do have some nice seats for today, if you'd like." I almost took him up on his offer, but thought, "No, I can't waste the ticket to Rock of Ages."
So I walked to the next theatre in my pile of discounts... Finian's Rainbow at the St. James on 44th Street. There was no one there, either, and my first thought was, "My God, not another show closing this fast after good reviews!" Brighton's reviews were decent - at least the ones I read, as were the ones for Rainbow. The discount I had was so good, that even though Finian's Rainbow wasn't on the top of my must-see list, I figured I may as well. So I walked up to the window, and shakily put my discount sheet through the window. When would you like to see the show, sir?" Relieved, I got my ticket for a few weeks from now. 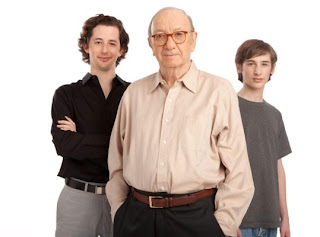 When I got home, I instantly went online to see what was being said about the closing of The Neil Simon Plays. The producer's statement said it all. Nice folks, indeed. Miss Metcalf will rebound, I'm sure, but I do feel for Noah Robbins, who played Eugene and Santino Fontana who played Stanley, both of whom got glowing notices. How hard it must be to read all that praise and still lose your job. Of course, Josh Grisetti's performance as the older Eugene never made it to a public viewing of his work.
As it turned out, I should have gone to see Brighton Beach Memoirs. God, I hate Halloween.
Jeff
(Top picture: Noah Robbins and Laurie Metcalf in Brighton Beach Memoirs; Bottom picture: Josh Grisetti, Neil Simon and Noah Robbins. Photos by Joan Marcus.)
Posted by JK at 3:29 PM