A New Sandwich on Broadway

If you've ever been to New York City, and spend any amount of time walking either on Broadway or 8th Avenue, you know what I'm talking about in today's blog. It all started years ago, when Grey Line Tours started having pick up points what seems like every 3 blocks. You know the red double-decker buses? That's Grey Line. You know the groups of five or six guys who block the sidewalk in front of you, trying to shove a brochure in your hands and offering sighting in NYC? If they have on red jackets, that's Grey Line. If all of the above has occurred to you on every OTHER block in Manhattan, switching everything red for blue, you have their competitors, New York City Tours. Perhaps the only distinguishing feature between the two is either the color of the bus or that one company redoes the outside of a whole bus to advertise a certain show. (I don't know what they will do when Shrek closes...). 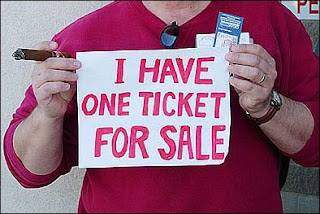 On my recent trip to the city, I became increasingly aware of something similar that I had only noticed as a minor blip previously. For years, college kids earning a few extra bucks would stand near the TKTS booth and shout out about a certain show, passing out fliers and offering "private discounts." It makes sense. Get the folks out of the really cheap discount line, and get them directly to the box office with promises of a better seat selection, no TKTS fee and a discount still. The fee-less ticket promise would have made me jump ship. Well, those people, along with the obnoxious, "I've got Billy Elliot and Gods of Carnage for today's matinee right here!" (Are those legit tix?) guys, are still hovering around the new and beautiful TKTS booth.
But now, with the pedestrian mall set up in Times Square, there are more of these hawkers spread throughout the area. On this trip, I came across a few types of these folks: 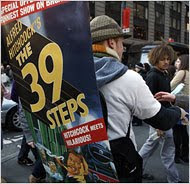 There are more and more of these people every time I go up there. It makes sense. It is cheap advertising and it creates contact on a personal level between a show and its audience. But I wondered, after getting thrown to the ground by the Superior Donuts guy's sign, when will they become so "normal" to see that we look right past them, like 95% of the people who walk by the Grey Line Tours people? Will the Ragtime people form a coalition with the White Christmas carolers and block our passage until we take a damn flyer? Only time will tell.
Jeff