I debated whether or not to post this review, as I don't want to seem like I'm beating a dead horse. But I figure, I took it out and have played it through at least three times with the best of intentions - to find something that really is outstanding about the closing soon Shrek: The Musical. 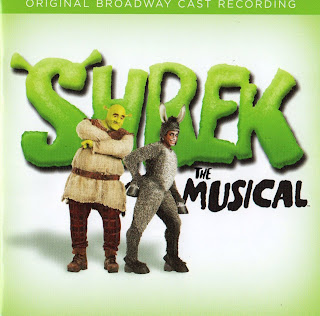 The Show Itself: Like this season's Bye Bye Birdie, its hybrid is outstanding on every level. It boasts a book and lyrics by Pulitzer Prize winner David Lindsay-Abaire (Rabbit Hole, Fuddy Meers), music by multiple Tony Award nominee Jeanine Tesori (Thoroughly Modern Millie, Caroline, or Change), and direction by Jason Moore, who proved with Avenue Q that he knows a thing or two about bringing child- and adult- hood together. Still, even with a hard working cast and a handsome production, there is something missing.

The Book and Score: When I saw the show, I thought, "I have a very strong feeling that this is one of those shows that I will like even more once I've memorized the CD." You see, I liked the show much more than I thought I would. I found it charming, very funny, and I remember specifically thinking, "I like this song and that song." But the problem, if you can even call it that, is that if you asked me to hum a tune or recall a specific scene, I couldn't do it. And worse yet, the more I think about the show, the less I like that, too.

The Recording: Like Decca Broadway's Billy Elliot: The Musical, this cast recording is superbly produced and lushly recorded. Extra kudos go to orchestrators Danny Troob and John Clancy, who have really taken Tesori's music and brought to fuller life. Their use of instrumentation and Tim Weil (musical direction and vocal direction)'s fantastic use of voices bring the character and fun of the show to the fore.

Still, as nicely done as this recording is, it does not disguise the overall second-tier quality of the piece. Having now listened to it several times through, I feel much like I did in the theatre. I like this song and that, but as soon as it is over, I don't remember it much. I don't find myself humming the tunes and not a single lyric has stuck in my head. I will say that as each song plays, I can vividly recall what was happening onstage. The actors are doing here what they do live in each performance. I like it more than I should, but I don't love it. This will probably sit on my shelf with others like Grease or Curtains, both of which are fun in the theatre, but not as ear candy. The packaging - the photography in particular - is terrific, and much better than this work deserves. It serves to highlight the fact that the scenery, costumes and make-up are top notch.

The Performances: Like I said, the actors do here what they do so well on stage. Each character is distinct, each actor a good to great singer, and character is never dropped even for a second. What stands out to me is just how hard Sutton Foster, Christopher Sieber and Daniel Breaker are working to sell this material. All three have done better work in better shows. And Brian d'Arcy James is simply at sea as a leading ogre. If he can't sell the obvious audition piece, "Build a Wall," that says a lot. He's good. He's just not great.

Standout Songs: Mind you, I had to look at the booklet carefully to identify these: "I Know It's Today," the growing up of Princess Fiona song and "Morning Person" highlight Sutton Foster. "The Ballad of Farquaad" shows the comic genius of Christopher Sieber, even if they couldn't record his song-ending tribute to Wicked, and "Freak Flag" and "This is Our Story" show how good the ensemble is, and even offer a glimpse of what might have been. Everything else is long on jokes and types, short on depth.

Grade: C+ (I really liked the packaging, which brings it up some...)