Of Thornton Wilder and Michael Jeter...

A few blogs ago, I wrote about the show that changed my life as a theatre-enthusiast. I, like most of you probably did, approached it from the point of view of someone who merely was deciding which show is the one that solidified your love for the art form. Well, as you can probably guess, I wear my theatre-love on my sleeve, and all over my cubicle at work. (Bet you can't guess which 4 show chards are hanging in it as we speak!) And as a result, I am the guy everyone wants mini reviews from, advice on best seats, advice on what show to take the kids to, etc.
One of the nicer by-products of being an out and proud theatre lover is that often people feel compelled to tell me their stories of playgoing. Today, that very thing happened, and I thought I'd share. See if any of this sounds like you or anyone you know:

"Hey, Jeff! Got a minute?" "Sure, Gary, what can I do for you?" "I just wanted to tell you that I went to my first play last weekend - my daughter's high school production of Our Town." "Oh, that's right, Gar, your daughter goes to St. Blah Blah, a private school with an amazing drama program. But I thought you said you saw your daughter last year in Joseph..." "Yeah, that Dreamcoat thing... no, I meant, they always do musicals, and I just saw their first play." I smiled, remembering Gary last spring trying to impress me with his seemingly encyclopedic knowledge of that Lloyd Webber opus, and finally discussing the fact that musicals are plays, but not all plays are musicals. I have to admit, I was tickled that remembered and used the distinction!
"Well, what did you think?" "Jeff, I gotta tell you, I'm glad I went to all three shows. I was lost the first time I saw it. I mean, no scenery, no real dishes to wash, not other whatchamacallits?" "Props?" "Yes! Props. It wasn't easy for me to get...I mean I've never been to an actual play before." "But you went back, anyway?" "Well, yeah. My kid was in it. I never miss one of her brothers' games, why would I miss her show?" He looked a tad miffed; I was jealous as hell of his daughter. "So, the second time, I could relax, because I knew what was happening and could figure it out. I even laughed at the first part - the kid that played George was the perfect dumb jock, and got kinda sad at the end. I mean she dies, and he really grew up." "See yourself as George much, Gary?" "Well, I gotta tell you. I'm glad she's into this, because now I see what I was missing. We used to tease theband kids and the play kids. But they were always so close. I mean, I liked my team mates, but aside from sharing a stinky bus and some game injuries, we weren't friends again until the next season. Now I get it." (I swear to you I'm not making this up!)
"So, this spring, they are doing Hello, Dolly! Did you know that musical is based on another play by the guy who wrote Our Town?" "You mean Thornton Wilder." "Right! Well, of course, you know that. Man, how do you know so much about this stuff?" "It's just like the awe I feel for you, Gar, when you can replay whole innings of games from the 75 World Series. We love what we love. Anyway, glad you enjoyed the play." I started to walk off.
"Wait!" I stopped. Gary is now standing at his desk. "I wanted to tell you I saw a musical on Broadway once. It is my only one. Something about a hotel... and I remember that our company gave us tickets to it to take clients. Hotel, hotel...it had a really sick guy in it, and when he came onstage, I was hooked! 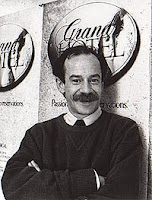 Now, every time I see him on TV or in The Green Mile, I tell my wife, 'Krista, I saw that guy live on Broadway!' I'll be damed if I can remember the name of that show or that guy, but I remember him dancing and sliding on the bar, which was really a pole being held by two ther guys. You know, when that show started, I thought, I'd rather be anywhere but here. But by the time it was over, I loved it! I don't know why I never went back. Do you know what I'm talking about? I want to tell my daughter about my first show." You know, I almost hugged the guy. "Gary, that musical was Grand Hotel, and the actor's name is Michael Jeter. You know, he died a few years ago." "That's it! That's it! Grand Hotel... and there was an old ballerina and a lesbian, and the secretary was HOT. She almost got raped, and... wait, he died? No way. That is so sad." "Yes, it is. But you sure remember a lot about it now!" "Yeah, it's funny that I remembered it." "Everyone remembers their first Broadway show. And that "hot" secretary is Jane Krakowski - she's on 30 Rock." "I'll have to watch that! You think my daughter would like a Broadway show?" "I am sure of it. She already does shows, Gary. She will love it." "Yeah. You're right. Tomorrow let's pick which one should be her first Broadway show, ok?"
No pressure there. I mean, we have to pick something she'll remember 20 years from now. Who am I kidding? No matter what, she'll love it. Everyone loves their first Broadway show, right?
Jeff
Posted by JK at 11:08 PM