Review of the November 18 matinee performance at the St. James Theatre in New York City. Starring Jim Norton, Cheyenne Jackson, Kate Baldwin. Two hours, twenty minutes, including intermission.
UPDATE: This review has been edited to revise facts about the ticket prices discussed below. Also, there are plot spoilers included.

Finian's Rainbow, which opened recently at Broadway's St. James Theatre, earned much critical praise when it opened as part of the Encores! series earlier in the year. In the time between that concert and the Broadway run, we were assured by the director/choreographer and the producers that the Broadway version would be a much fuller, more realized, and opulent production than the concert version. I did not see the concert version, so I can't speak to the differences, if there were any. But from where I was sitting (an excellent seat in the mezzanine), it looked less like a full Broadway production than a glorified concert.
I'm guessing Chicago spoiled us all for Encores! transfers. But the differences between the two point out all that is wrong with Rainbow. Chicago was re-imagined to what we can see eight times a week at the Ambassador Theatre. It was purposely paired down to nothing, but always with an eye toward keeping the themes and style of the original staging. Further, Chicago's staging is fully realized, detailed down to the last finger flick, and choreographed by a master in the style of a master. Mostly, though, this Chicago works because it was never old-school, never old-fashioned. And that is what works against Finian's Rainbow, a decidedly old-school, old-fashioned show. Not that there is anything wrong with that, necessarily. But put a creaky old book (sooooo much exposition that things don't move forward until a full hour has gone by in an hour ten minute act one) together with community theatre level production values, and you get Broadway's first show downsized due to the economy, I'm guessing. 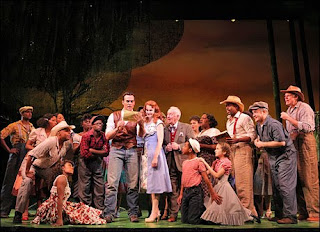 The Book and Score: I'm not old enough by two decades to have seen the original, so I can't really speak to any tinkering done between the original book (by Yip Harburg), the film version (by Fred Saidy) and the book adaptation (by Arthur Perlman). But whatever they did or didn't do, the book still plays like like it is a 40's musical, and still comes across as a poor man's Rodgers and Hammerstein crossed with an even poorer man's Lil Abner (if that's possible). I'm sure its bold in your face-ness about bigotry caused quite a stir back in the day, balanced only by the magical element which could always have given the creative team an out if necessary. And in two ways, Finian's Rainbow even comes across as a timeless classic: the bigotry theme is certainly relevant considering a black man (to use the show's vernacular) is in the White House, while a veritable rainbow of citizens is still fighting for equal rights; and the whole idea of wealth through credit is particularly resonant given our current economic state. So there are enough bones here to build an interesting, relevant revival out of a mediocre show. Instead, mediocrity rules the day.

Ultimately, Finian's Rainbow was everything I feared it would be. Even the up-tempo numbers were slow. It got really good, though, about ten minutes before intermission, when they got to the meat of the story. The first hour was all set up for about five subplots, none terribly interesting separately. Act Two, which was almost all reprises, went much faster, mainly because the story actually happened. 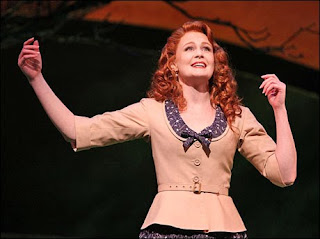 The Leads: I am glad I saw it, because it was nice to see Cheyenne Jackson (Woody) playing a straight role (not versus gay, but meaning without camp) and the chemistry between he and Kate Baldwin (Sharon) was palpable even from the mid-mezzanine. Hers is a star-making performance. I'd like to see her in an original role, and thought she would be a great replacement for Alice Ripley in next to normal. The woman can sing – her soprano is nearly flawless, particularly in “How Are Things in Glocca Morra?”- and dance and act like nobody's business. She was easily the most interesting thing in Act One. And when she and Mr. Jackson duet in “Old Devil Moon” you can see just how good this could have been. Mr. Jackson’s dancing/singing/acting style here perfectly fits the matinee idol mold. And when he smiles, it lights up the room. I’d like to say that he he really makes the most of his role, but he does everything he can do with a role that isn’t much of a push for his much more considerable talents. The third of the show’s leads, the titular Finian is played by Tony-winner Jim Norton. And he is a revelation. The role requires little in the way of singing, which handles nicely and more like an acting choice than with regard to “prettiness.” Norton is absolutely magnetic; he plays the show straight with the conviction of an actor who finally gets his shot at Hamlet. His performance has Tony nominee written all over it. 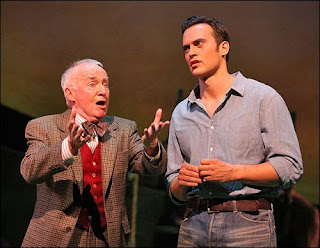 The Supporting Cast: The supporting cast is much more mixed bag than the solid leads. Christopher Fitzgerald, as Og the leprechaun is really not very funny in spite of the fact that he milks one cute joke til that cow is dry, all five or six times the script calls for it. He is somewhat better at the sight gags required of his role, and his knobby knees and gigantic calf muscles help add to the visual humor. Much of his role depends on the magical element of the show, which is mostly, apparently, caught in the budget crunch. At the risk of being snarky, he doesn’t even do a passable Lucky Charms shtick or accent, which goes in and out at will. Somewhat better, though largely because he is way better than the material, is Tony-winner Chuck Cooper, who plays the “black version” of a bigoted white Southern senator. Watching him work through the self-discovery and metamorphosis from jerk to open man is both hilarious and poignant. Unfortunately, his big number, “The Begat” when he is joined by three other men of color comes across more like a black-face vaudeville number (it could be the insulting staging), than a powerhouse opportunity for great singers. The much lauded return to the stage by Terri White, is notable mostly because she makes a tiny part seem huge simply by mugging a few times in that sassy black woman way and by belting out a single verse of a single song like the whole of American Idol rested on those 20 seconds. 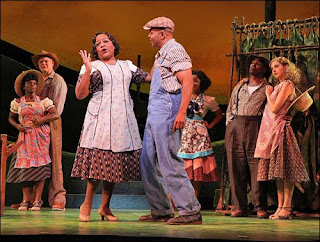 The villains of the piece, Senator Rawkins, the Sherriff, and the Senator’s henchman, Buzz are really little more than stereotypes, but all three actors (David Schramm, Kevin Ligon and William Youmans, respectively) play them in an excellent mixture of reality and hyper-stereotype. Mr. Schramm, in particular, walks that fine line that allows us to laugh at, rather than hate, his bigotry, which in turn allows us to appreciate his transformation by the end of the show. Only the two kids, Christopher Borger and Paige Simunovich, stick out as particularly bad. Apparently, both went to the Annie school of obnoxious kids acting. They mug, they pull focus and they dance is if they are the head ballet dancers in the film Center Stage (no offense to Center Stage). 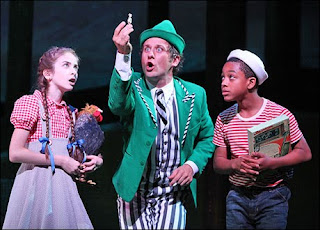 The Staging/Choreography: The large ensemble sings together very well, and the make the most of director/choreographer Warren Carlyle’s staging. Considering how much press is quoted outside the theatre regarding the dancing, let me say this, and I am being literal, not exaggerating even a smidge: there are, I think, three dance numbers, not including the lovely girl (Alina Faye) who dances what she's saying because she can't speak - and every second of that looked ad-libbed. Each of the three dance numbers go like this. The entire cast is on stage, and the music starts. Someone either whistles or "whoo-hoo"s and Cheyenne Jackson/Kate Baldwin/Jim Norton (depending on the song) starts a solo that looks like a cross between Riverdance and Oklahoma. The cast applauds the solo and two dancers join the first person, in a triangle that has the lead as the front point. They do the same solo, and step/slide forward. Three more dancers make up the new back row and all repeat the initial solo. Whomever is left on the sides of the stage moves to spots that will allow them to sidestep with thumbs in belt loops (guys), or twirl (girls) in between the rows the next time the solo is repeated. Then the side people sidestep/twirl back to the side where they started, linking hands with the other dancers resulting in a circle which then turns into rows, which then turns into a couples version of the original solo, and finally, into a tableau that resembles the end of a cheerleading routine, including a forceful head nod/broad smile in the final musical bump. 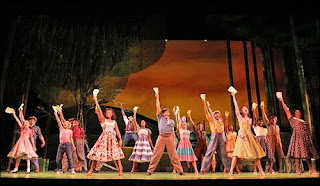 The Technical Elements: The set (designed by John Lee Beatty) never changed and looked like something a community theatre might throw together the weekend before the show; they apparently got a deal on bright green paint. It says a lot when the picture of Hidden Valley on those dressing bottles looks more interesting. Framing the stage is a rainbow shaped light rig (lighting designed by Ken Billington) that has matching light fixtures aimed directly at the audience, so you just know eventually, we will see a rainbow. In fact, at the very end we do, and it started to light up and the audience started to clap, likely thinking that the effect will be spectacular. Suffice it to say, it was not. By the end of the 30 or so seconds it took to light the whole thing, the audience stopped clapping. (The audience, I should also note, did NOT give a standing ovation.) Finally, Toni-Leslie James’ costumes are appropriate to the period, purposely (and purposefully) colorful, and even fun occasionally. But even if you are a student and snag a $27.00 seat, you really aren't getting your money's worth, and with all of the discounts out there, I'd be pissed to find out that I paid $120 on Tuesday night. And that is in spite of how terrific the leads are.