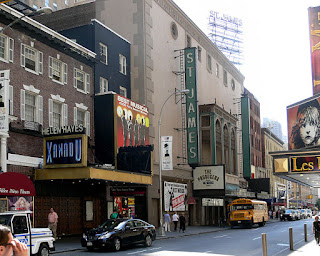 As I prepare for my jaunt to New York tomorrow to see Finian's Rainbow, I'm trying to figure out what I will do with my day, pre- and post- show. Every time, and I mean that literally, I say to myself, "Jeff, there is so much to do in New York, there has to be somewhere new you can go. A new place to eat, something..." But the truth is I am most comfortable in the Theatre District/Times Square/Hell's Kitchen area. 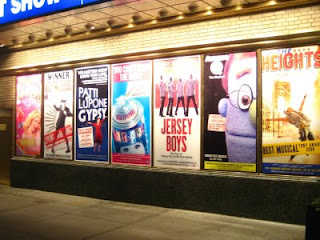 (Shubert Alley - the Big Posters)
I've been there hundreds of times, and the thrill of walking up the subway steps on 44th Street and seeing the marquees for Phantom and whatever is playing at the St. James and Shubert Theatres gets my heart to pumping. Strolling past Sardi's and looking in at the fabulous and near fabulous having lunch makes me smile. (In better times, I'd eat there myself as a treat.) Then crossing the street and feeling that burst of wind at Shubert Alley, glad to see that Memphis' producers have enough confidence in the show to add a Memphis awning over the front door. After checking out the new production photos with critics' quotes, I start down the Alley and look to see which shows have their big posters hanging there. The most recent "new" thing is Junior's, which isn't really that new anymore. And I am faced with my first decision: should I go there for lunch, or should I grab take out on my way back to the train station?
Then I am at 45th Street. To my right, the marquee for The Lion King looms large, and to my left the Booth Theatre, where my beloved next to normal has added a purple awning over the sidewalk.
I know that at some point that afternoon, I will walk down 45th Street to get a closer look at the huge faces on the Booth doors, and then the pictures for A Steady Rain and God of Carnage (I bet there will be more to look at this trip now that the cast has changed). To avoid my pang of sadness I'll feel now that Avenue Q is no longer at the Golden, I'll cross the street mid-block and checkout the Imperial and the latest additions to the Billy Elliot company. My tour will end with a looking over at the new pictures and critical exclamations at Superior Donuts. But that will be later, probably as I mill about too excited to stand still as I wait for the doors to open for the matinee.
So, I'll cross 45th Street and walk in the Marriott tunnel of wind, missing the huge billboard for Thoroughly Modern Millie, but even more missing that cool mirror/mural they had of iconic Broadway moments - Hello, Dolly!, Cats, A Chorus Line, Joel Grey in Cabaret. And I'll come out at the other end, glad that TKTS is back where it belongs, hoping they'll finally have The Addams Family up at the Lunt-Fontanne (that theatre bare is UGLY!),and then a quick glance to my left, and a smile at the exuberance that In the Heights is. 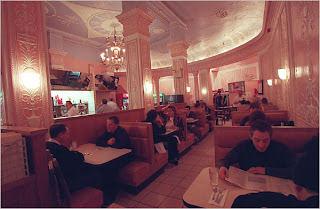 (Inside the Cafe Edison)

At this point in my trip, give or take a half a block and/or 10 minutes, I will either pass, hold the door and/or smile at Priscilla Lopez, who I will see either coming into, leaving or ordering at the Cafe Edison at the Edison Hotel. I am not exaggerating when I tell you that I have seen her on every trip I've made there since In the Heights opened, roughly 15 trips. I'm surprised she doesn't recognize me and think I'm a stalker or something! I usually, 90% of the time have at least one meal at the Edison. Great for celebrity sighting, cheap food and huge portions, the Edison is one habit I'll probably never break. Besides Miss Lopez, I've seen Howard McGillin, Rebecca Luker and hubby Danny Burstein (and their kids), Faith Prince, Matthew Broderick, and Karen Olivo to name just a few. And you have to love the hand printed signs taped to every non-moving surface, and the paint which betrays decades of paint-overs... 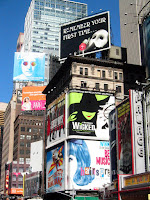 Before and after the show, I usually make the rounds at all my favorite shops, and I always start with that breathtaking moment when you step out onto Broadway itself and take in the hugeness and excitement of Times Square. There are times when it brings tears to my eyes, you know? Then I hit the M&M Store, the Hershey Store, and all three Broadway gift shops - the one at the Marriott, where the staff sings along to whatever CD is playing, the "original" cute hole in the wall, One Shubert Alley, and the nicest shop, the one whose name always escapes me, but is right across the street from the Majestic Theatre. Every time I go to One Shubert Alley I always feel nostalgic, remembering when that was the ONLY place you could buy Broadway stuff, and being thrilled when a new catalogue came in the mail. 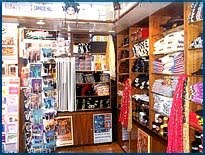 (Inside One Shubert Alley)

The only place outside that immediate area became a part of my Broadway experience is the "new 42nd Street." Thanks to Disney and the Hilton Theatre, my routine also includes frequent dining at the BEST DEAL in New York City...Dallas BBQ. Been there? Try it. HUGE portions and CHEAP! Trust me, you'll get hooked on it just like me. And what's next door? Coldstone Creamery. MMMM MMMM! And it is very close to Penn Station.

That I can recount exactly all of these details tells you I am a creature of habit. And I wouldn't have it any other way.
What do you do every time you are in NYC? Share by adding a comment below!
Jeff
Posted by JK at 3:49 PM