Watch out for black cats and walking under ladders! It is Friday the 13th! Short column this week... 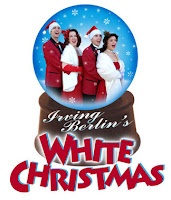 Today, Friday the 13th, Irving Berlin's White Christmas opens at the Marquis Theatre. I guess since they already know they have hit on their hands, why be superstitious?

Coming up one month from today: A Little Night Music opens Sunday, December 13. Let's hope that show has the luck of Billy Elliot and The Lion King. 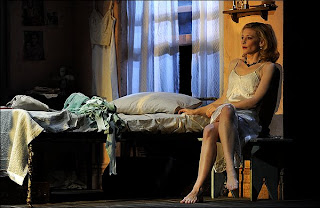 Caught this in an article from The Washington Post after googling Cate Blanchett in A Streetcar Named Desire. Seems that the actors on stage are all smoking real tobacco cigarettes, even though the Kennedy Center has a strict no smoking policy. Apparently, the rule does not apply to theatrical productions where the characters smoking is historically or thematically accurate. Even more interesting is that what the actors smoke is up to them, and this cast chose the real thing over herbal smokes. I bet the front rows love this!

I try not to be negative, but I take the departure of director Francesca Zambello from "Broadway-aimed" The First Wives Club as a good thing. Positive, if you will. While I am certain she has earned the critical praise she has gotten for her work in the international opera scene, she made a mess of Disney's The Little Mermaid, which closed after 2 years, good for most musicals, but not so much for Disney. I found that production absolutely boring to watch, and uncreative in getting the "under the sea" movement feel. I mean wheelies are great if you are a sand dweller, but fish and mermaids swim on all planes in the ocean, right? Someone should have taken her to see Finding Nemo: The Musical, a full-out Broadway show playing several times A DAY at Disney's Animal Kingdom. Her departure sounds like it could be their loss and, ultimately, their gain. And I'm super glad to see that another Rupert Holmes show might make it to Broadway, after all.

Some good news on the theatre front: two shows announcing that they have been extended! And it couldn't happen to nicer, cooler people than Julie White, Justin Kirk, Mark-Paul Gosselaar and Carrie Fisher. Both The Understudy and Wishful Drinking were extended two weeks to January 17th

Have a great weekend! And please send in your comments! I love hearing from you and posting your thoughts - even when we don't agree! Jeff