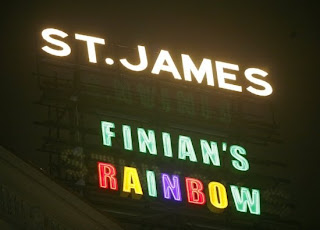 Any time an advertising campaign uses a bold color, it does two things (at least in my mind). It draws my immediate attention, and if the images associated with it are equally bold, I forever associate a show with that color. Lots of shows, for example, use red as their primary color - Billy Elliot and God of Carnage, both Tony winners this year, use that startling hue. But two shows I immediately associate with red - West Side Story (more so because of the iconic film logo which the current revival employs) and even more, the current revival of Chicago. Combined with visually stunning black and white photos, the red CHICAGO really sticks out in a great way. Secretly, I am hoping that when that show finally closes - I'll guess 2017 - that someone makes a book that catalogues the entire history of that show in black, white and red. I will always associate orange with Avenue Q and purple with next to normal.
And so it is somewhat of a shock to my "one color" mentality, that I find myself equally, if not more so, drawn to the ads/logos for two current shows that employ the full spectrum of colors: Finian's Rainbow and Fela! I haven't seen the latter, yet, so I can't fully speak to its success, though I could make an educated guess. But I have seen the former, and that is what I am blogging about today. 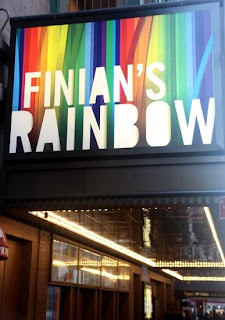 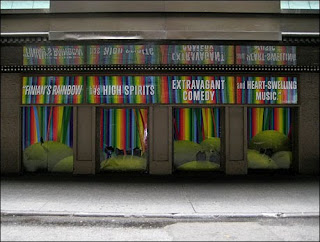 You really can't miss the Finian's Rainbow logo that swaths every street level surface of the St. James Theatre. No matter at what angle you approach you can't help but notice the cascade of multi-colored stripes that flow from top to bottom. And for that alone, one can argue that the choice of the spectrum works. Also, it is obvious, given the title, which again can be seen as a plus. After all, ticket brokers all over the place can figure out that a buyer wants tickets to see Finian even if all they can say that that the show has a rainbow in it. In this case, literal is a good selling point. It is also exceedingly simple, reflective of a rather simple show. Again, not necessarily a negative - after all it signals immediately that it isn't the brain tickle that next to normal's messed up music staff suggests or the eerie feeling that the strange stick figures give off at God of Carnage. Further, the bottom of the artwork, a simple cut out of rolling green hills with a lone man approaching a sleepy village, suggests a simplicity and an air of mystery. 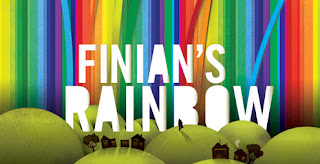 Having seen the show, I can also say with some authority that the logo really matches the show you will see. The show is as simple, colorful, and as bare bones as the construction paper strips and ground that the logo is made of. The lack of detail in the production is even mirrored in the logo lettering that has the center of the "R", "A", "B", and "O" missing. Talk about truth in advertising! 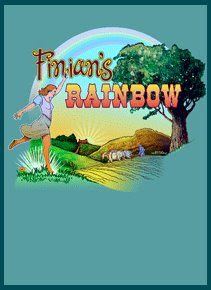 And I think the change to this logo from the Encores! is most appropriate. People go to Encores! productions expecting a bare bones, slightly staged concert version of an old show. And so the Encores! logo, full of detail, makes sense: it reminds patrons of the full scale production that happened in the first place, years ago. A memory-tickle, if you will. Changing to a more "as you will see it" logo/artwork for a sit-down Broadway production is all the more appropriate in this "full disclosure" era.

Finally, I think that the logo looks much better small scale - on the Playbill and show card. The larger scale really looks kinda cheesy as it covers story tall doors and theater marquees.

So, I think that the folks who designed the logo/artwork have been successful in creating a memorable piece that is eye-catching and true to the show it represents.
Jeff
Posted by JK at 2:46 PM