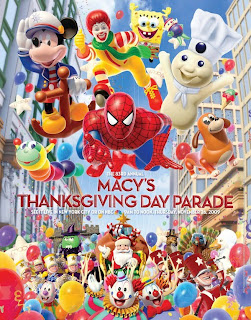 CBS: A+ for content and sound. Can you get any more American than Thanksgiving, Ragtime, West Side Story and Dreamgirls? I don't think so! And I loved the idea of showing each in an appropriate but real life context.
The Ragtime segment has me more excited than ever to see this revival of a show that I only somewhat admire. "Wheels of a Dream" was terrifically performed, and in beautiful voice, minus the histrionic over-do of the original. Sorry Audra fans... she and Brian played the show like it was all about them. Quentin Earl Darrington and Stephanie P. Umoh were wonderful, emoting, gorgeously blending, and soaring as the song climaxed, but without all the excess. While the segue to the "Ragtime" sequence was a bit shaky, one can tell by the way the finale of the number is staged that Marcia Milgram Dodge intends to give equal weight to the traditionalist immigrants, the stiff and increasingly crowded out status quo, and the exuberance of the blacks, who are finding their own voice. A+
The West Side Story segment wisely chose "America" which, even outside in an old parking lot, feels just right. Kudos, too, to Natalie Cortez, who played Anita in place of Tony winner Karen Olivo. Ms. Cortez sang and danced beautifully as Diana in A Chorus Line, and it is great to see her in another dance classic. A
Finally, the Dreamgirls segment, done on the street outside the Apollo Theatre gets extra points for ambiance AND guts. The traffic rolled right by (in both directions) and passersby passed by. Whoever handled that particular potential nightmare gets points for making sure no one got taken out by a cab and that no one on the street acted like they even noticed the Dreams! Oh, and the song, always a catchy favorite of mine was well-delivered by the newest company of the show, soon to depart for a National Tour. A

While I am certain there was lip-syncing on BOTH stations, why is it that the entire parade looks like it is on a time delay on NBC? I mean, please!

NBC: B for content, C for sound. NBC went more for the traditional Broadway, i.e. advertisable names, recognizable show titles, and trying to be hip. Billy Elliot, Shrek, Bye Bye Birdie and Hair fill that bill nicely.
Billy Elliot's segment gave many of us a first glimpse of the new Mrs. Wilkinson, Kate Hennig, in "Shine." She's no Haydn Gwynne, that is for sure. But really, who is? She was passable, but not worth running to the Imperial to catch a new star. And while the "Angry Dance" might have been a downer for the occasion, no other number from that show really works 100% out of context. "Shine" is no exception. (See below.) B-
Bye Bye Birdie showed me the John Stamos I expected to see live onstage - peppy, charismatic, and more dancey. Of course, here he was lip-syncing his vocals to "Put on a Happy Face," so breathing wasn't really an issue. He seemed much more relaxed and like he was actually enjoying himself out there. The girls seemed like typical Broadway kids, overacting and smarmy. Stamos knows how to act for the camera, but it seems the girls didn't get the memo to take it down a notch or seven. Still, it looked better on the street than onstage, so good for them. B
Hair looks as fresh and energetic as the day it opened. "Aquarius" was a great choice, and the Tribe, led by (I think it was) Sasha Allen was fun and interesting throughout, and played both the space and the camera excellently. A+
The only part of Shrek I didn't see when I saw it months ago was the newly added curtain call, "I'm a Believer." And just like Bye Bye Birdie I have to ask why is the finale the best thing in the show? Clearly the cast loves doing it. If the rest of that show looked as fun and as together as the finale does, I could see it running for years. A
Now, I look at this stuff like a Broadway fan/educated theatre goer. My sister, who barely has time to use the bathroom (two kids under 2 and a half will do that) but has a passing interest in theatre assessed these things as I think someone who might buy a ticket if it looks good, i.e. the general public.