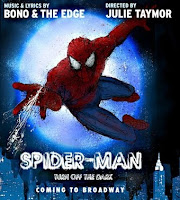 Occasionally, I will share with everyone questions I get from readers of this blog. Today, I thought I’d answer four FAQ’s I get about me and Spider-Man: Turn Off the Dark. All of these questions have come to me in various forms from at least 5 different readers, so I summarized each question and will give no credit to the writers of the question. (If you feel, after reading, that I have not answered your question to your satisfaction, please feel free to write in again and I’ll do my best!) ** Since this blog posted, there is an update, also in RED.

Q: Since you’ve already seen SM:TOTD, where would you recommend sitting in the huge Foxwoods Theatre?


A: First and foremost, seating preferences are really up to the person seeing the show. Of course, it depends on the theatre, too, and the Foxwoods is huge. I have sat in the third row of orchestra and both the very front row and almost all the way in the back of the orchestra. I found the third row to be pretty comfortable, though the bigger scenes would have been nicer with some distance. The front row about killed my neck, and the back rows afforded me what amounted to holding a postcard in front of me at full arm’s length. I could see the whole stage, but none of the details - and forget trying to tell who was singing or talking! 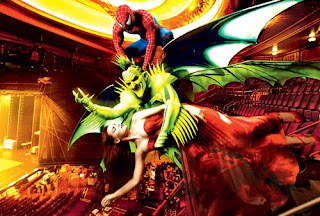 For SM:TOTD, I found the “Flying Circle” to be the perfect place to see the aerial sequences - they were right in front of me, and Spidey landed about a yard from my seat! That said, any farther back than maybe 5 rows in that section might cause you not to be able to see the whole stage. And while the distance made the huge scale of the show easy to see, I could not make out a single facial expression on any of the cast. That is the primary reason I am sitting in the orchestra section about 10 rows back when I see it again on February 9th. I’ll let you know.
And, of course, there is the consideration of price points. If you want to see it bad enough, how much are you willing to pay?
Q: You really seem very “pro” Spider-Man. Are they paying you to say nice things about the show?


A: I receive no benefits from anyone connected to this production, be it monetary or in the form of comps. ANYTIME I get anything free from a show or a related company, I disclose that information on my blog. For example, I received a comp copy of The Playbill Broadway Yearbook, Volume 6 for the express purpose of reviewing it. My blog states that clearly. Finally, even if I were receiving any form of compensation, I feel absolutely NO obligation to be anything other than honest.
And I go into EVERY production with a “pro” attitude. Why would anyone go into a show hoping for the worst? I want every show to be awesome and an experience. Don’t you?
Q: How do you feel about reviews coming out before the show officially opens? 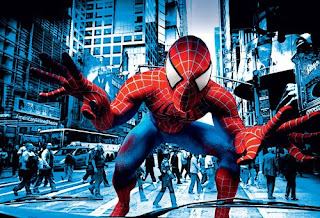 A: I think it is wrong to publish a formal review before the powers that be have determined that the work is finished. That is exactly why I did not review SM:TOTD when I saw the 5th preview, and why I will not following the February 9th performance, despite the fact that I purchased the ticket expressly because it was right after the last announced opening. If I like the progress of the show since I last saw it, I’ll most likely return and post a formal review. That said, I will blog about my February 9th experience, just not review the show. And I will be honest.
I also do not buy the whole “before we get to see it some 200,000 people will have seen it” argument some critics are putting out there. What difference does that make, besides maybe taking away some of the punch and influence a review might have? And did anyone review the productions of Phantom, Miss Saigon or Les Miserables before the official opening of those, even though thousands of people had seen it already elsewhere? The fact that it is big news certainly makes everything written about the show that much more important, but not a reason to jump the gun.
Q: Why are you so against other people’s negative opinions about SM:TOTD?


A: I am not at all against people having negative opinions about any show. What I am against is the following:
A: For not making the preview vs performance thing clearer. Yes, they should have made it clearer, and they’ve corrected that. BUT, take a look at the ads for Anything Goes - they all say in a bright red star “Starts March 10!” Not “previews start,” just “starts”. The Importance of Being Earnest NEVER distinguished in any print ad that the show had a preview period. (In both cases, you have to click through several screens on the Roundabout website to see preview and opening night information. And it isn’t big print!) Where are all of those complaints?

B: Being anti-Spider-Man for using quotes in ads before the show opens. I agree. 100%. It is misleading. Then make The Book of Mormon stop it. It has never even been performed publicly, and yet Vogue has apparently weighed in. If it is a joke, take it down! I feel mislead.

C. Vilifying Spider-Man for charging regular and premium prices for previews. I will expect to read several blogs and chat room posts about this concerning EVERY SINGLE SHOW - play or musical - THAT HAS OR WILL OPEN ON BROADWAY THIS SEASON, except Women on the Verge and War Horse, and High. These shows are the ONLY to offer a preview discount of $10 to $20 a ticket. Further, Spider-Man, despite being the most expensive show ever, is not really passing it on to the consumer more than anyone else. Their top prices are not the highest of all Broadway shows, and their Premium seats are not the most expensive either. The very first performance - I’ll assume it is a preview - of Bengal Tiger has exactly 4 seats per row in the front orchestra section (the two on the farthest side on each end, under, I might add, the boxes) for “regular” priced seats. Every single other orchestra seat before the huge overhang is $313.00! So my question is: why is everyone so harsh on Spider-Man, when every other show does the same thing? And worse. 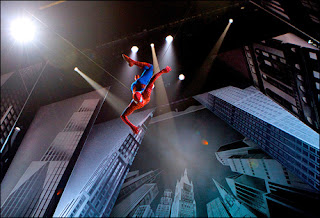 D. Demanding closure of the show because of injuries. What a stupid thing to say. There isn’t a show on Broadway that doesn’t have cast or crew injuries on a weekly basis. Not one. Had the injuries been caused by overt negligence, that is one thing. But shit happens, folks. You can get hurt anywhere. Career ending injuries happened on A Chorus Line, Cats…someone on the crew of the original La Cage was killed by moving scenery. People fell off the stage regularly at Les Miz. And the BRAND NEW, post -Spider-Man injuries so they should know better, musical Bring It On lost its leading lady to a cheerleading injury. Where are the cries to close that show?


If Spider-Man is doing things that are unfair or misleading, call them on it. Demand changes. But be damned sure that the consequences of such actions are also felt by every other show that does the same thing or worse. Call other shows out on message boards, newspapers, online sites, just as you have this show.  And that is why I defend Spider-Man so vehemently.
Now, when the show opens and I see it, if the second act is a pitifully bad as it was during the 5th preview, I will not hold anything back in my disappointment and disgust. Trust me. But I still won’t be against them for all the other things I just mentioned.

Comments?  Leave one here or email me at jkstheatrescene@yahoo.com or Tweet me.
Jeff
2.142