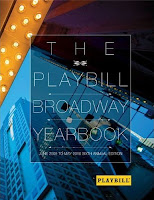 Just like when I was in high school, I can't wait each year for the annual Playbill Broadway Yearbook.  And this edition (June 2009 - May 2010, Volume 6) is no exception; as usual, it was worth the wait!

If you aren't familiar with this series of books, you really owe it to your theatre-loving self to get these books.  (Playbill Online's Store has back issues at a ridiculously low price for each, and even this current one is on sale there.)  They are an easy to read memento of every show that played on Broadway during the 2009 - 2010 season. Literally.

Each show starts off with its own page featuring a Playbill cover, the cast list as of opening night for new shows or as of a certain week in October for long-runners (they had to pick a cut-off, right?).  There are full production notes and credits, including crews, producers, and lists of musical numbers (for the musicals, naturally).  There are full color production shots and, perhaps best of all, headshots of every single actor in every single show, plus the creative team, too!  My favorite parts of that are the "Alumni" and "Transfer Students" sections, which give us headshots of each actor who departed the show in the past season and those of actors who joined, but aren't on the "official yearbook cast list."  And talk about inclusive!  Most shows even have pictures of the house usher staff, the box office staff, and everyone backstage from wigs to sound who make our favorite shows run smoothly!

Most shows also have a "Scrapbook" page, contributed by cast members or crew members or both. On those pages there are fun candid shots and cool little stories and lists of things like "Sayings only the company would understand", "The person with the most roles", "the fastest costume changes, " and "most cell phone rings during a performance."

Three such scrapbooks that stood out for me in this edition were:

There is also a comprehensive section of articles and many color photos of every theatre related awards show and charity event, from the Tonys to the Theatre World Awards to Broadway Bares, Broadway Bears,and Broadway Barks.  My favorite photo in that section has to be the candid of Angela Lansbury and Len Cariou at an event together.  Mrs. Lovett and Sweeney Todd have aged gracefully, for sure!

Two of the best parts are the very beginning and the very end.  The book starts with a comprehensive overview compiled by the Yearbook Staff: A date by date Timeline of Events and an article called "Head of the Class," including such things as "Awards They Should Give" and "Tribute Shows That End with a Big Picture of the Subject Hanging Over the Stage."  (There were 3: Million Dollar Quartet, Come Fly Away and Sondheim on Sondheim.)  The book ends with an easy to read (the print is HUGE) and unbelievably complete Index.

This series is one that I go back to time and time again.  They don't just sit on my shelf.  I love to go back over the years of a show and see how the pictures and thoughts change from season to season.  This is one nice, collectible, if-you-only-buy-one-Broadway-book-a -year book.

(Notice of Full Disclosure:  This year, I was contacted by Applause Books and offered a complimentary press copy of the book to review.  I did accept the complimentary copy, with the understanding that I would give an honest opinion of the contents, which you read above.  I at no time felt obligated to present only positive comments.  You may note that I reviewed last season's edition with similar positivity, and I bought that copy myself.)