From three to none: over the past few months Broadway has been home to as many as three Stephen Sondheim shows, but now there are none left.  And Sondheim fans are wondering what's next?  Finally a revival of Anyone Can Whistle? Not another Gypsy!  For now, though, fans can enjoy the CDs of all three recent Sondheim efforts: West Side Story, A Little Night Music, and the CD of today's blog, Sondheim on Sondheim. Indeed all three recording represent some of the very best in the Sondheim canon: West Side Story won the Grammy last year, and both Night Music and Sondheim are up for the Grammy this year.  And having listened to the CD several times now, one can understand why it was nominated, and perhaps why it won't win. 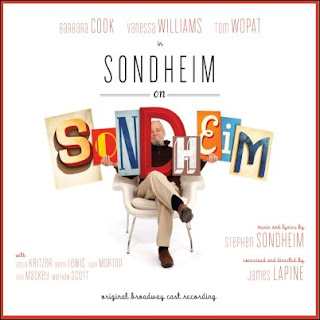 The Show Itself:  One of several revues of the works of Stephen Sondheim, this one differentiates itself in one key, and most satisfactory way.  Guiding us through selections from his very own oeuvre, Stephen Sondheim himself appears via video screen and narrates the evening.  Self-deprecating, funny and honest, you get to see more than a glimpse of what makes this genius tick.  His discussions on the evolution of songs (how we got "Being Alive" in Company; how we got "Comedy Tonight" in Forum) will please students of his work.  Segments from two of his biggest flops, Passion and Merrily We Roll Along will introduce audiences to two of his finest scores.  And a brand new song that really tells you the tenor of the evening, "God" opens Act Two. 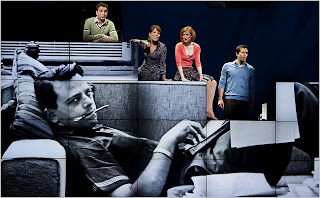 What I Said of the Production:  "Were the attitude any more heightened, one might knock it, calling it "cruise ship material."  But, under the wise, and vastly knowledgeable direction of James Lapine (and smart musical stager Dan Knechtges), one could hardly compare this to a Love Boat show.  Both Lapine and Knechtges instead are giving a nod to the genre's history, while sweeping us into the 21st century, and allowing us to remember revues past briefly before transporting us into a new age: respectful, but showy, inventive, but grounded, and with a technological flair akin to the first time Broadway saw a huge tire float effortlessly above the stage.  Of course, there are many reasons to hope that the show succeeds and makes a recording - ask any Sondheim fan why. But let me help enumerate them: Barbara Cook, Vanessa Williams, Tom Wopat, Leslie Kritzer, Norm Lewis, Euan Morton, Erin Mackey and Matthew Scott. Even though the first three names are above the title, it would be misleading and a slight to the cast not to say that they are a true company. All of them have solos. All of them have distinct moments to shine, and all have times to support the others. Another key reason to hope for a recording is the quality of the musicians who play the show (orchestrations by Michael Starobin) and the terrific mix of traditional and unique arrangements of the song selection (music direction and arrangements by David Loud). There is literally something for everyone in this show." 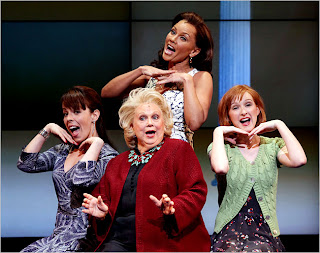 What I Have to Say About This Recording:  When I first started listening to the CD, I thought I'd probably skip over the Sondheim narratives (they are on separate tracks, for the most part, so you can skip them), but I have found that I don't, after all.  They are 100% engaging, his voice is soothing and he is infinitely as interesting as each song included.  In short, what made the show so terrific - Sondheim - is what really makes this recording stand out.  Without his sharp observations, you'd be left with, well, just another Sondheim revue.

Still, what worked in the theatre definitely works here, too.  In fact, I appreciate Barbara Cook's efforts much more here than live.  And not because they can fix the sound on a recording (which I doubt they did much in her case, anyway), but because I'm not seeing her read monitors or be courted off stage like she's a frail old woman (which, for the record, she is not).  But on a CD, you can really concentrate on her voice, and you can still see why her voice defined a generation.  I find her readings of the songs from Passion to be superb (her Fosca to Norm Lewis' Giorgio is simply wonderful), and her timing excellent in an otherwise iffy "You Could Drive a Person Crazy."  The problem there isn't either singer (Tom Wopat duets with her), but the too cool, over jazzy arrangement. 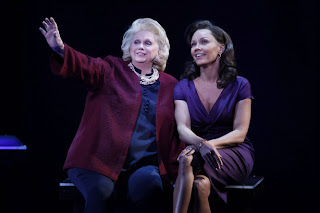 The weakest song in the show, "Epiphany," from Sweeney Todd, has been wisely left off the recording - there is nothing from Sweeney on the recording.  And a few of the pretty nifty mash ups of songs that were interludes between segments are gone, too.  Otherwise this is pretty complete.

Everyone in the cast gets to shine, and I find Vanessa Williams' performance on CD to be the best sung and acted.  She simply exudes finesse, class and talent.  Her duet with Ms. Cook is a superb mix of "Not a Day Goes By" and "Losing My Mind."  Euan Morton, Matthew Scott and Ms. Williams do a terrific complete scene from Merrily - "Franklin Shepard, Inc.", and the ladies, Williams, Cook, Leslie Kritzer and Erin Mackey do an excellent "Now You Know."  And Krizter, Morton and Scott do more excellent scene work with "Opening Doors".  This CD makes a great case for another stab at Merrily We Roll Along.  Assassins also comes off very well, with the company doing masterful versions of both "Something Just Broke" and "The Gun Song." 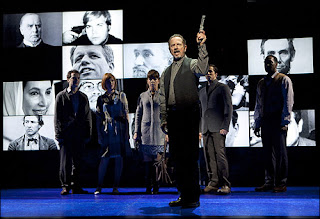 This is a superb record of a truly wonderful production.  The CD has terrific production values, both in terms of sound and in the quality packaging.  It is nice to have some great color photos and the full lyrics.  Still, as much as I love a lot of the cast recording, and I listen to it frequently, I have to admit that with some exceptions (and the inclusion of the Sondheim narration), this CD also reminds us of how great the original casts were.  And that, I guess like with many revues, is the blessing and the curse.