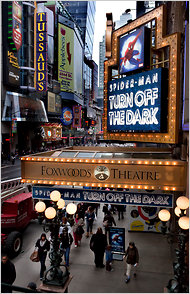 Of course, right after I bought tickets to the very first performance of Spider-Man: Turn Off the Dark after February 7th, it is announced that the opening will be March 15th!  Ah well, such is life.  At least I'll be able to see how much work has actually been done on the show since the 5th preview, and I suppose, again after it finally opens (it's my money, shake your heads if you want!).

Of course II, this has and will re-open the debate about when to review, and is it fair to the public to see a show in previews, blah blah blah.

Earlier this week, Ken Davenport ran a blog post about the public's true opinion about whether or not a show being in previews mattered.  He did a un-scientific poll of people standing in line at the TKTS booth, and found that the vast majority of people polled didn't care as long as the show was good.  One of my favorite blog-buddies in the entire world, GratuitousV, took exception to the poll and is vehement that the public is being duped by shows that aren't ready being sold at full price.

I can see and understand her point, and I even agree with her that stars of shows vacation schedules should be made universally known ahead of time so people can plan trips to see their favorites.  (Kudos, by the way to A Little Night Music and Women on the Verge of Nervous Breakdown; both shows posted vacation schedules for Catherine, Angela, Patti and Brian Stokes before a single ticket was sold to the public.)  And I also think it would be great to go back to the old days where there was a preview schedule of prices - again kudos to Women on the Verge, it wasn't much, but previews were cheaper.  And I do feel for people who plan whole vacations around a performance that gets cancelled.  Full refunds are never enough to equal that disappointment. 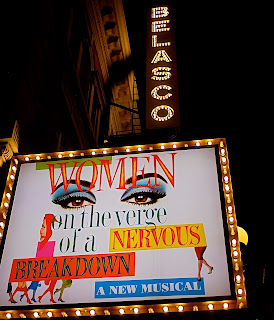 But the chief argument GV and so many others make that really frosts me, ESPECIALLY when they invoke the "draw of Spider-Man to crowds of children and tourists" is that people simply do not know the show hasn't officially opened and is in a state of flux. FOUL!  Spider-Man has been on the NATIONAL news almost daily for weeks.  If you don't know that the show hasn't officially opened, then it is on you at this point.

In an effort to be more fair and balanced about this topic which has so many of us in an uproar, I ran this past my friend Mike, who is much more practical in his love for theatre and whose opinion I value immensely.  He had this to say about my rant: "One specific thing that I maybe disagree about is your suggestion that, due to all the publicity, ticket buyers should know that the show is in previews. To be honest, a lot of the coverage I've seen has actually been misleading or inaccurate on this point, using phrases like "since the show opened..." or "the early reviews are...." So I don't think the coverage has helped educate people about the difference between a show in previews and one that's opened. But I do agree that there probably aren't too many people who care."


Then too, is the idea that the show itself isn't ready to the point that what you will see at given preview is ill-prepared.  Somehow, the theatre gods smiled upon me and I actually attended two previews - one of Verge, and one of Spider-Man, where they made headlines for a pre-show announcement that not everything would be working, and that the company hadn't done the whole show the whole way through many times, if at all.  In both cases, the only things that didn't (eventually) work were the things that ALL shows in previews have not working: the story and the music need more attention.  BUT did I not see a full production of both?  I sure did!  In BOTH cases, the show stopped for technical problems.  In both cases, everyone involved was highly professional - it was cool to see cast and crew work as one, and to actually give the hard working crew their due.  Also, in BOTH cases, the stoppages did not cause a single person to break character, lose their place in a song or scene, and never once did they lose composure.  Not a single person had a script in hand, no one in either show was ever in the wrong place, dances were sharp and crisp, not a lyric was dropped.  So, to say seeing a show in early previews - in these highly publicized cases, anyway - means you are seeing an inferior performance is ridiculous.  OK, both shows need/needed to be worked on as far as the book and music.  But who's to say that even if both shows open/ed to rave reviews that you won't still hate the book and the songs? (No matter how much you rave about The Phantom of the Opera, you won't make me love the book and the score.)
Further, it has been suggested but not a few people - though I will quote GratuitousV because she is well spoken and because I know she understands I'm not attacking her personally - that the public should be made fully aware that a show in previews might have the following issues.  And I have seen each of these separately from other bloggers and online chatters. 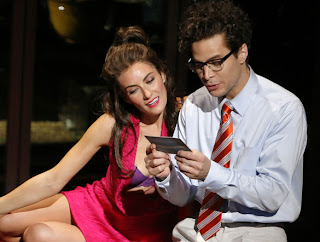 "Would you want to see a show in which some of the actors may not know their lines, the sets may get stuck, forcing the show to stop, and songs or dialogue may get added or cut as performances progress toward opening night? That's what a "preview" really means in some cases."

Let me address each element: 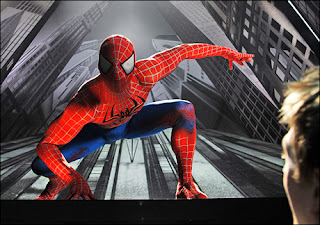 And changing the opening night, which started this rant in the first place, is also their right.  Spider-Man: Turn Off the Dark IS, and I can verify it, the biggest, most complicated show EVER.  Bumps, starts and stops and postponements are going to happen.  Usually, people moan and groan when a producer won't stand behind his own show (The Scottsboro Boys, anyone?) and let it find an audience, or complain because more time to work on a show is needed but not given.  And yet, here we are slinging arrows at a producer who is putting his money where his mouth is.  He's letting his team get the show where they want it.  And, I understand that any performance that was halted - even the notorious one with Christopher Tierney plunging to serious injury - FULL refunds have been offered or seats to another performance have been given.  Not bad in that case, because the audience only missed 7 minutes of the entire show - the ending, which is/was incomplete at the time, anyway.  I also understand, though I can't verify it, that partial refunds have been offered to folks at those first few previews as well.

All of that said, I can see and understand people's ire over the ever changing date, and that yes, there is plenty of blame for this to be laid at everyone's feet.  But at this point, what difference does it make, really?  It is a sellout almost every night, and looks to be around for awhile no matter what.  Hell, Beatlemania never officially opened and ran for years, anyway!

As for me?  Well I rank the early previews of Women on the Verge and Spider-Man amongst the most thrilling, exciting times I've had in the theatre.  There is nothing more LIVE than LIVE theatre at its rawest and most vulnerable.

Labels: Content of Blog, Spider-Man: Turn Off the Dark, Women on the Verge