What's Next After Normal

About a week before the Great Broadway Closeout of 2011, The New York Times ran an article about some actors who have long been connected with a show about to close.  You can read that article HERE.

One of the featured actors was next to normal's Henry, Adam Chanler-Berat.  He seems a logical choice as he is the only actor that has been with the show from the beginning - off-Broadway, DC, Broadway.  His feelings - that the end will be like breaking up with someone, sadly - mirror my own increasing sorrow that something I love will no longer be, but will live as some very fond memories. 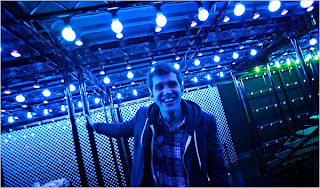 Mr. Chanler-Berat won't be long off the boards, though, as soon he will be playing the title role in off-Broadway's Peter and the Starcatcher, an extension of the Peter Pan story.  His co-stars, Christian Borle and Celia Keenan-Bolger will be playing over 50 roles!  I am so looking forward to seeing this; I love the whole Peter Pan "thing", I love the co-stars, and, of course, won't miss the opportunity to see him play a new part!

The other remaining normal cast member, Louis Hobson, also has a new show on the horizon (he will not be joining the n2n tour as the chatrooms might have you believe).  He will be in the Roundabout Theatre Company's The People in the Picture, with two time Tony-winner Donna Murphy.  And he will be playing a doctor.  I have a feeling this doctor will be MUCH different than Drs. Fine and Madden. 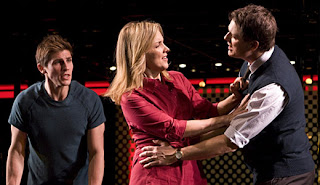 Alice Ripley in the National Tour of next to normal
The other original cast members have all moved on, as well.  Alice Ripley, as you no doubt know, headlines the National Tour of next to normal, bringing her acclaimed performance to audiences across the country.  She is also promoting her latest CD, Daily Practice.  J. Robert Spencer left the role of Dan and rejoined his original Jersey Boys co-stars (Daniel Reichard, Christian Hoff and Michael Longoria) as The Midtown Men.  They perform a concert of 1960's guy group hits. 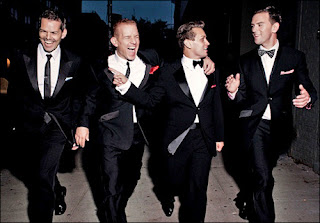 J. Robert Spencer and The Midtown Men
Original brother and sister team Aaron Tveit and Jennifer Damiano have both gone on to star in their own new shows this season.  Jennifer, as you might have heard, is Mary Jane Watson to Reeve Carney's Peter Parker, in a little show called Spider-Man: Turn Off the Dark.  Enough said.  Meanwhile, Aaron co-stars with Norbert Leo Butz in the musical adaptation of the film Catch Me If You Can.  He left n2n for a brief period to do the pre-Broadway try out of the show; it is great that he gets the chance to see the project through. 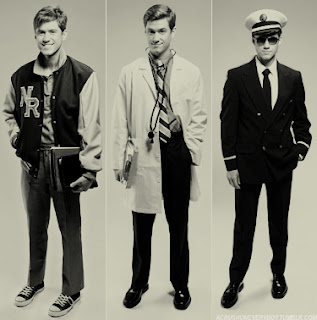 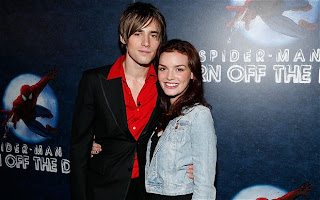 TOP: The various disguises of Aaron Tveit in Catch Me If You Can
BOTTOM: Jennifer Damiano and her Spidey, Reeve Carney
During that brief hiatus from n2n, Kyle Dean Massey took over the role of Gabe, and he later officially replaced Mr. Tveit in the role.  Later this month, Massey returns to the role he left to play Gabe, Fiyero in Wicked. 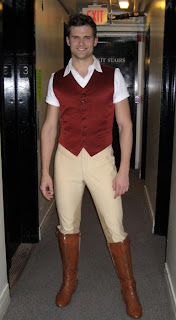 Kyle Dean is soon to be
Dancing Through Life in Wicked
Meghann Fahy the current Natalie just finished filming her final scenes in the soap opera One Life to Live, and will begin a process that is still sort of new to her: auditioning for Broadway shows.  She landed the understudy-to-leading-next to normal-role after auditioning for Spider-Man!  From there, they called her in to read for Natalie and the rest is history.  1 audition, 1 role.  I have no doubt we'll be seeing much more of Miss Fahy!

Speaking of understudies, original Diana stand-by, Jessica Phillips, is in the cast of the upcoming Priscilla, Queen of the Desert: The Musical. 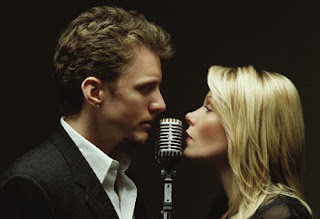 Jason and Marin
And the current Dan and Diana, Jason Danieley and Marin Mazzie will be premiering their new cabaret act later this winter/early spring.  And knowing their track records, I'm sure it won't be long before we see them both on stage again soon.

Pulitzer Prize winning writers Brian Yorkey and Tom Kitt sure aren't resting on their award-winning laurels!  Together, they are working on a new musical specifically for Robert Downey, Jr.  Mr. Yorkey has been working on the book for Catch Me If You Can.  And Mr. Kitt, most recently with American Idiot, has joined forces with Amanda Green, Lin-Manuel Miranda, Andy Blankenbeuhler and Jeff Whitty for the new show, Bring It On: The Musical, which premieres January 15th in California. 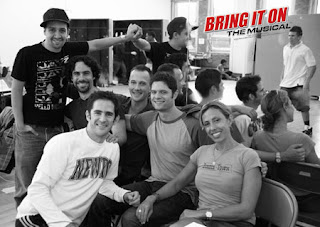 The Bring It On Creative Team
I'm so glad to see that everyone in next to normal has or is moving on to exciting projects, sharing their talents with the rest of us.  Still, I can only imagine the bittersweet feelings they must be having as Sunday evening approaches.  I know I sure am...