Shortly after I started this blog, I began looking back at shows that were successes in their day, but are significant historically and relevant to today's Broadway scene.  Previous shows in this "Back in Time" series include The Mystery of Edwin Drood  and The Who's Tommy, both modest hits in their day.

Today, I'd like to start a series (the first of three blogs) on Stephen Sondheim's most popular if not most acclaimed show, Into the Woods.  But instead of looking back at the original Broadway production, I will be examining the Tony Award-winning 2002 revival.  The reasons for this choice, I hope will become clearer as we go (beyond having done an 80's, 90's and now 00's show).

WHEN IS IT TOO SOON?
As most of you know, Into the Woods debuted in 1987 with a stellar cast of some of Broadway's finest musical actors, including Bernadette Peters, Joanna Gleason and Chip Zien.  That production remains the longest running of any in the Sondheim oeuvre, playing just under 2 years with 765 performances before closing in 1989.  I bring this up in discussing the revival  because part of the buzz surrounding the 2002 revival was the relatively short period of time between the closing of the original and the opening of the revival (just over 12 years).  Indeed, it was one of the first revivals that had people in the biz asking, "should there be a time limit between productions?"  Another Sondheim show, Gypsy, had this beat a few years later with just 5 seasons between productions. 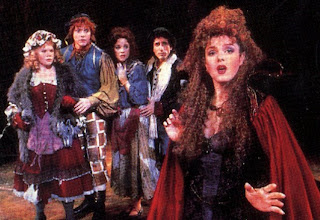 The Original Broadway Cast
I have to tell you, it is really kind of off-putting as a person to be old enough to have seen the original production of a show AND to start seeing revivals!  This lovely feeling will repeat itself twice with me this season, having seen the most recent revivals of both Anything Goes and How to Succeed...  and now the current revivals of both!

Still, Into the Woods is one of my favorite productions, not only of Sondheim shows, but of musicals in general.  It appeals to both sides of the musical theatre fan in me:  Act One is pure fun and entertainment - snappy dialogue, catchy tunes and a satisfying opening and closing; Act Two is all darkness and meaning, with so much to chew on.  So it was with great interest that I went, of course, to the revival. 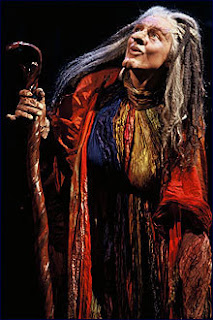 Vanessa Williams as The Witch
SONDHEIM GOES DISNEY!!??
I was attracted by the company, which included some of my favorite actors: Vanessa Williams (Kiss of the Spider Woman), Gregg Edelman (City of Angels) and Christopher Sieber (Triumph of Love).  And I was very interested in the buzz surrounding the production.  First, author and original director James Lapine was again at the helm.  Second, it was made very clear in the press that this would be a complete re-imagining of the original production, both in tone and technology.  And finally, the buzz on the street was that of disdain - how dare the very author of the piece ruin a beloved classic by (hold your breath and wait for it) "Disney-fying" it!!??

As it turns out, the tone was much lighter, and perhaps more sarcastic, but "Disney-fied"?  Not really.  Still, it did not have the edge of the original.  But remember, too, when it was original, it was new and unexpected.  Years of revisiting the score and watching the DVD will soften that edge in any new production.  And who is anyone to comment on how an author (or any artist for that matter) revisits his own work?  If Lapine wanted to re-do the whole show as a 42nd Street-style extravaganza or a Brechtian minimalist piece, it is his to do with as he pleases. 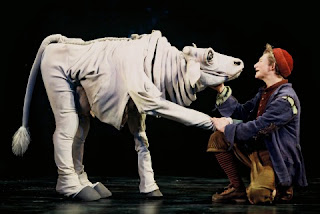 Milky White (Chad Kimball) and Jack (Adam Wylie)
What did I think?  I enjoyed the revival a great deal, and it was a lot of fun seeing new interpretations of characters I love.  There were things in the revival I preferred - the scenery, the tree transformation, and a few of the performances (can anyone match John McMartin in the self-effacing/know-it-all New Yorker combination of delivery?  Hell, no!).  And I especially loved making Milky White a character inhabited by a human (one of my absolutely favorite actors, Chad Kimball).  But I think I preferred the original production a bit more than the revival, over all.

This production of Into the Woods was nominated for 10 Tony Awards, winning two (Best Revival of a Musical and Best Lighting Design of a Musical.  Vanessa Williams, John McMartin, Gregg Edelman and Laura Benanti were all recognized with Tony nominations.  The show also won the Dram Desk Award for Best Revival and two other awards, out of 9 nominations.  The fact that it beat a very critically acclaimed production of Oklahoma! in the revival category caused some stir.  Was this given because Tony voters felt bad that the original production lost the Best Musical prize to The Phantom of the Opera?  Was this backlash against The Producers guru Susan Stroman, who choreographed and really set the style of Oklahoma!? Or was it because of anti-British sentiment for re-doing a quintessentially American musical?  In the end, it was a split of sorts.  Into the Woods got the top revival prize, Oklahoma! ran about 100 performances longer.

So you must be thinking, "Why blog about the revival?"  Well, the answer is simple: this production has more to do with the subsequent history of Broadway than the original.  And that is what I'll be examining in the next two parts of this blog series.