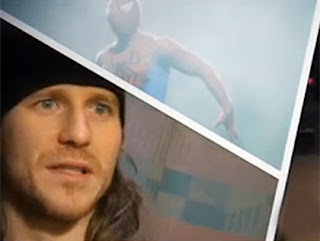 Here is the commercial teaser for the interview of injured Spider-Man: Turn Off the Dark actor Christopher Tierney.  The interview with reporter Dana Tyler of CBS-2 News aired on January 3rd's 11PM telecast.

(For some reason, I can not get the segment to stay attached to the blog. Please click HERE to see the teaser for the CBS2 interview.)

There is so much I could say about this commercial alone. But I think the poetic irony of it is so much more powerful than the ad itself. In the show, there is a scene with the editor of the big newspaper in town, who rejects each and every idea and headline pitched to him. None, it seems was enough to sell papers, particularly the truthful ideas. Hyping and twisting words in the scene got a laugh, particularly in light of all the press surrounding the show in real life. And now here we are, with a heroic cheating of death, in conflict with the public's love of failure and the potentially juicy tidbits we might get from the the ACTUAL person involved. Here is a chance to set the record straight and maybe even focus on a good news survivor story. But, just like those outlets who focused on the Chilean miner who had a wife and mistress waiting for him, here we are again... This tease for a news interview makes TMZ look tame and The National Inquirer look like a children's book. I'm not naive to the point that I don't recognize a hard sell to garner viewers, and I appreciate that news is a business. But this is a NEWS program, right? Not a gossip show.

HERE is the complete interview from CBS-2, which I can also not seem to embed.

Try as she might, reporter Dana Tyler cannot get Tierney to say a bad word about the experience, the show or the future. She warms us up with the idea that here is the actor "breaking his silence." Um, maybe he was only just now well enough to do an interview? Maybe he wanted to wait until he was mobile so he could show us that he survived and isn't clinging to life as reported throughout? I'd go with the latter, considering the 100% class act this young man has proven to be. He wouldn't take the bait when Tyler suggested that the cast had been "pushed too hard," and she seems positively aghast when a teary Tierney tells her that as far as the people directly responsible for the "human error" are "forgiven and forgotten" by the actor.

Of course, you can't blame Ms. Tyler entirely. Her job is to dig for the harder to admit truths. The piece even ends with the anchors asking about possible legal action (how Chicago). Finally a smile of admiration comes when she says he feels "he doesn't need to."

This interview is a somewhat softer sell, though Stephanopolous does go in for the kill when he brings up Tweets by Alice Ripley and Adam Pascal.  Patrick Page should go into politics: he response was perfect - "Well, I can understand and appreciate their responses, but I wish they could be in the building with us every day to see what really goes on."  Yes, they have a right to be upset, he says, given what they have heard.  But the reality is different.  I dunno...he seemed sincere as did every other actor in his/their praise for the way the show's crew and cast work together.  And poor Carpio.  Just hours after taking over the role, she is asked if she's afraid.  Unprepared for the question, she misinterpreted it, thinking he was asking about taking over the leading female role, when he was asking if, new to the part, was she afraid for her safety.  Decent save by both parties.

ABC News, of course, had to titillate: note the captions during the interview: "SPIDER-MAN SURVIVOR: The Cast Goes Public", etc.   Hmm... a seedy tell-all on the way?  OK, it was awfully positive, but it is a great news story of triumph.  None of it seemed too "party line, stick to the script."

Again, though, a new standard of class, dignity and humanity has been set by Christopher Tierney.  His positive attitude, his gratitude for everyone who supports him, his awe of the show and its company, and his selflessness is role model material.  What an example he is setting.  Just like a real-life super hero.

Labels: Broadway on TV, commercials, Spider-Man: Turn Off the Dark