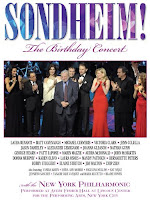 DVD: Sondheim!  The Birthday Concert. Presented in March 2010 at Avery Fisher Hall at Lincoln Center for the Performing Arts, New York City. Conducted by Paul Gemignani.  Hosted by David Hyde Pierce.  Written by Lonny Price and David Hyde Pierce.  Produced and Directed for the Stage and Television by Lonny Price.  A presentation of Ellen M. Krass Productions and THIRTEEN in Association with WNET.ORG. 116 minutes.

Let me just cut to the chase here.  Sondheim!  The Birthday Concert is the best performance of its kind that I have ever seen on screen.  Bar none.  It is expertly staged, filmed, and edited by Lonny Price.  The quality of the sound is beyond excellent.  The pace is quick, witty, reserved when appropriate and celebratory throughout, particularly due to the superb hosting of David Hyde Pierce, who, oddly enough, has never done a Sondheim show.  (Let's remedy that one fast...).  Even the setting is cool... the entire orchestra shell draped in billowing material and lit as a giant birthday package.

And what gems that package holds!  First and foremost, what evening of this magnitude for Stephen Sondheim would be complete or so well taken care of without the masterful baton of Paul Gemignani, the man who has conducted every single original Sondheim production since 1975?  And who better to have him conduct than The New York Philharmonic?  The sound is pure bliss.  Their "Birthday Overture" and "Theme from REDS" really allow them to shine, but their contribution to each song is immeasurable and definitive.

The cast list is a who's who of two kinds.  As one might expect at an occasion such as this, names associated with Sondheim's works are plentiful:  Bernadette Peters, Elaine Stritch (who at this point in time had no idea that they'd be critically acclaimed in Sondheim's A Little Night Music), Mandy Patinkin, Donna Murphy, Marin Mazzie, Patti LuPone, George Hearn, Jim Walton, John McMartin, Joanna Gleason and Chip Zien.  The second list is a who's who of today's youngest and brightest (and simply magnetic) performers, some of whom have Sondheim on their resumes, some who don't: Bobby Steggert, Audra McDonald, Laura Benanti, Laura Osnes, Matt Cavenaugh, Jenn Colella, Victoria Clark, Michael Cerveris, Jason Danieley, Alexander Gemignani and Karen Olivo.  Opera singer Nathan Gunn, ABT dancers Blaine Hoven and Maria Riccetto, and the Shark girls from the revival of West Side Story round out the stellar company. 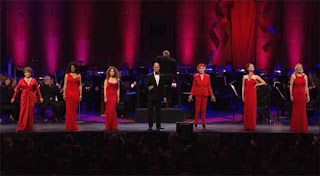 And given the level of talent on that stage, one would expect a flawless evening.  And that is exactly what you get.  How nice to have all expectations met and exceeded.

Following the overture, the evening opens with a few songs that Mr. Sondheim only contributed lyrics to - "America," with Olivo and the girls recreating the number from the revival, and Alexander Gemignani delivering a simple and lovely "Something's Coming" from West Side Story.  Jason Danieley and Marin Mazzie offer a fun "We're Gonna Be Alright" from Do I Hear a Waltz?, and Victoria Clark showed of her comic chops with a seldom recorded number, "Don't Laugh," a song written to help a show in trouble out of town called Hot Spot.  "New talent" is called upon for "Johanna" from Sweeney Todd (Nathan Gunn) and "You're Gonna Love Tomorrow"/"Love Will See Us Through," from Follies, featuring the charismatic talents - and I mean all four fairly jump of the screen oozing charm and charisma - of Matt Cavenaugh and Jenn Colella and Bobby Steggert and Laura Osnes.  All four reveal a very promising future for the Broadway musical. 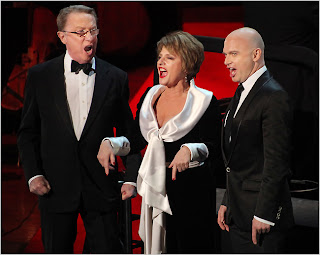 The next segment of songs includes a variety of original cast performances - a touching Follies number from John McMartin, and Jim Walton singing a song from Merrily We Roll Along that wasn't even written when he starred in it.  But the real highlights were the crowd-pleasing reunions of Chip Zien and Joanna Gleason, doing "It Takes Two" from Into the Woods, and "Finishing the Hat"/"Move On" by Mandy Patinkin and Bernadette Peters.  All four transported us back as if they were still doing their shows 8 times a week.  "Move On" was particularly brilliant, with both Peters and Patinkin in superb voice.  A funny and brilliantly conceived hybrid was up next with dueling Sweeneys Michael Cerveris and George Hearn doing a stunningly sung and acted "Pretty Women", and then the hilarious trio - yes, trio - of Cerveris, Hearn and Patti LuPone doing "A Little Priest." 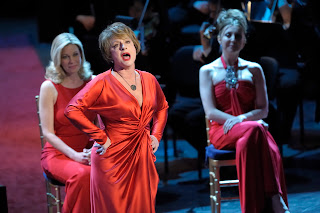 The final segment - notable for the much publicized "red dresses" alone - proved to be the absolute icing on the cake.  Six of Broadway's greatest living divas took the stage and each delivered a "Sondheim Lady" number.  Each was an absolute treasure, but three numbers really stood out for me: Patti LuPone's blistering and for me now definitive rendition of "The Ladies Who Lunch", complete with a sincere and touching moment between LuPone and Elaine Stritch, originator of the role.  Strich, on her feet the second it was over, LuPone gesturing for an ovation for Stritch.  It was a beautiful of the moment moment.  The second standout was the biting and humorous "Could I Leave You?" from Follies as presented by Donna Murphy.  A study in song interpretation and acting, this, too, is for me a definitive version.  But the absolute treasure of the evening was Elaine Stritch's comic, bold, and honest interpretation of "I'm Still Here" from Follies.  It is the very definition of brilliance.  And it stands as testament to what a great theatre legend she still is.  Brava, indeed. 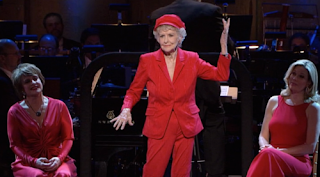 When the actual event happened, it made headlines for obvious reasons, but also because the casts of every then current Broadway show came to pay tribute to the musical theatre master.  For the closing number, some 287 singers filled every aisle on all levels of the hall and on the stage to sing, for a visibly moved Stephen Sondheim, "Sunday" from Sunday in the Park with George.  You'd have to be in a coma or worse not to be moved by this giant tribute.

What strikes me most about this particular concert is that because the very best talents came together, it was even more evident just how genius his works are.  Without fail, the minute each number started, every single performer got that "in the zone" look of intensity, followed by what I call the "Sondheim Look."  You may know it - the singer can't help but act the entire song, so evocative are the lyrics, and because each is so complex their eyes glaze over in an amazing level of concentration.  Even the really great ones do this.  But the most remarkable thing is that all of this still happens when each number is without context.  Here, the "Sondheim Look" is joined by an expression of sheer joy and admiration.  It is as if each performer is also seeing outside him or herself and even as they interpret are in awe of the fact that they are getting to do this for the master himself.  (Would that every Christine/Phantom pairing had this magic!) 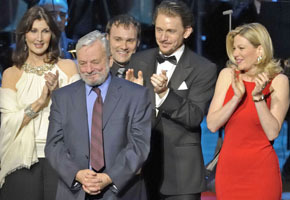 Of course, the man is the reason for the occasion, but isn't it wonderful to celebrate a life that continues to give all of us so many gifts?  This DVD is a lasting testament to the genius and artistry of one of Broadway's greatest people.