Timing is everything , they say, and I swear I was working on this blog for awhile before the announcement came that there is going to be a new biopic about my all-time favorite director/choreographer, Bob Fosse!  Ah well, at least now I am relevant rather than living in the past, right?  This is the second in an occasional series.

Bob Fosse made an impact on Broadway, film and television, long before there were terms like "king/queen of all media."  I'm pretty sure that had he lived to see today, he'd have his fingers in all the social networks and the creation of online indie films.  There are many books about the man that go into great depth about his career, his self-destructive life, his womanizing, his love affair with Ann Reinking, his worship of his true love, Gwen Verdon.  I have info about my favorite at the bottom of this blog.  As this is primarily a theatre blog, I'll just talk about his stage career, though I'd be remiss not to mention that great year, 1973, when he became the first person to win the Tony, Emmy and Oscar in the same year.  He is also the only person to win all three awards in the "Best Director" category.  (He won for Pippin (Tony), Liza with a "Z" (Emmy) and Cabaret (Oscar).)

Most people tend to go from Broadway to Hollywood, but Fosse was never really "most people."  Instead he had a decent film career going, dancing and choreographing.  But, when he began to bald (or so the story goes) his opportunities for film roles diminished significantly, so he moved east.  On Broadway, he appeared as a soloist in a revue called Dance Me a Song, and later understudied the title role in the first revival of Pal Joey.  From then on, pretty much, it was behind the scenes, with a career that grew from choreographer to director to conception to master of all things in a production.  He returned to the stage as a performer, this time taking the lead in the next revival of Pal Joey. 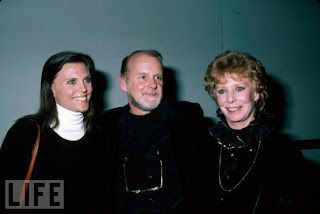 An improbable trio of friends: Reinking, Fosse, Verdon
His first choreography credit on Broadway was The Pajama Game, for which he won his first Tony Award.  The rest of his Broadway career reads like a primer of classic musicals.  He staged the dances and directed some 14 productions, earning 20 Tony nominations in a variety of categories, including best choreography and direction, but also Best Actor (Pal Joey) and Best Book (Chicago and Big Deal).

Here are some highlights of Fosse on Broadway: 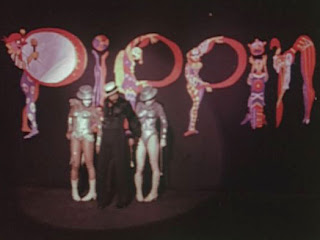 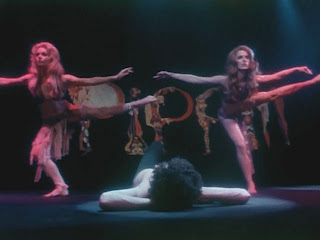 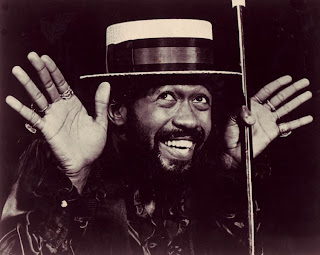 Pippin: Clips from the commercial, and
Fosse protege, Ben Vereen 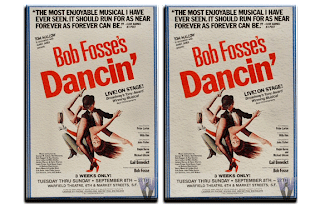 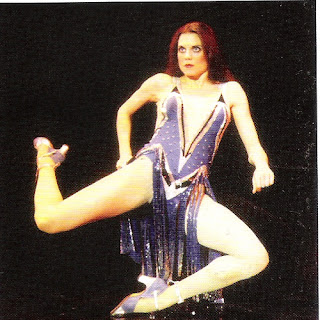 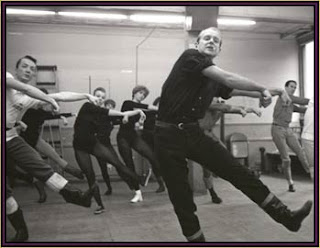 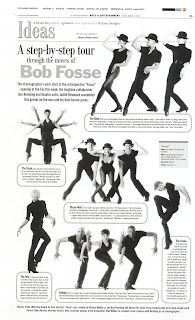 Top: The Master at work
Bottom: How to do his signature moves
Of course, a true legend also influences the future of his art form.  And Fosse's influence is felt everywhere there is dancing and a stage.  Heck, he is a line in The Birdcage ("Fosse, Fosse, Fosse!," says Robin Williams).  And his moves are seen regularly in the dance numbers on Glee.  But the carriers of the Fosse torch, the Broadway dancers, make sure his life's work and influence is carried on to the next generation.  Two of his biggest successes came well after his death.

Fosse a revue of his works was painstakingly recreated by none other than his two muses, Reinking and Verdon.  The show would eventually star Reinking, Neuwirth and Ben Vereen, and star many of today's best Broadway dancers.  He would be pleased most by that, I think.  The show would run 1,093 performances, earn 10 Tony nominations and win 3, including Best Musical of 1999.
Chicago the show that most of All That Jazz is the background of wore the man out, physically and emotionally.  And for years he was bitter about how the show was beaten across the board by A Chorus Line.  He even was pretty public in his sense of betrayal toward his dancers who went on to be replacements in that show.  Today, it is so easy to see that the show was really ahead of its time, which probably explains why it is the longest running revival ever, at nearly 6,000 performances and showing no signs of stopping.  Choreographed "in the style of Fosse" by Ms. Reinking, his bowler hats, crooked joints and flexed jazz hands are being introduced to what is now two more generations of future Broadway gypsies.  One can only imagine the thrill he would have felt knowing that his baby, Chicago, would be this big this long!

Though the film version, one of the highest grossing musical films of all time, did not recreate his dances or staging, Rob Marshall, director/choreographer of the piece admits that Fosse's presence is felt in every move and every frame.  Even original star Chita Rivera makes a cameo.

When he died in 1987, the world lost a major talent.  He lived hard, he worked hard and he wrung every bit of living out of his life.  Sad as it is, it seems somehow fitting that he passed away just as the National Tour of Sweet Charity was opening, literally.  And how poetic that he collapsed into the arms of his wife, muse and love, Gwen Verdon.

My favorite book on the subject is All His Jazz: The Life and Death of Bob Fosse, by Martin Gottfried.  It was published by Bantam Books in 1990.

Comments?  Suggestions for another Broadway Legend?  Leave one here, email me at jkstheatrescene@yahoo.com or Tweet me!
Jeff
2.148﻿
Posted by JK at 12:01 PM