Thanks to a wonderful gift card from my family at Christmas, I am finally catching up on my cast recordings, DVDs and books.  The downside is that my thoughts on these things, which I will share, are still going to be dated.  Take today's review... Bloody Bloody Andrew Jackson has come and gone already, and I am just now getting to the CD.  Oh, well... better late than never, right?

The Original Cast Recording of Bloody Bloody Andrew Jackson is rather odd for several reasons.  A good reason is that the music is fresh and new and atypical of a show recording.  An interesting reason is that the packaging is kinda cheesy and cheap, but if it were too fancy, it wouldn't really fit the show.  (I suppose a paper CD slip would be too low brow?)  And a not so great reason it is rather odd is that it is one of those CDs I'm sure I'll play a lot for awhile, but I don't like it nearly as much as I like the show itself.

I have several CDs of shows that I adore, but don't really care too much for the show: Ragtime and Big River are but two.  And I have many CDs that made me love the show even more because the CD was so great: Passion, Grind and Once on this Island are but three.  But I have to admit...I'm trying to think through my CD collection... a case where I like the show more than the CD is a rare, if ever before experience for me.  What makes it even more strange is that I don't think I'd like it much if I hadn't seen the show!  Ah, well... 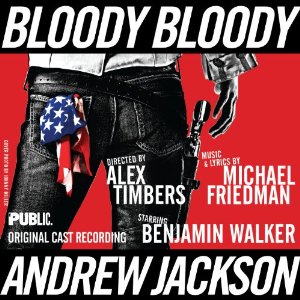 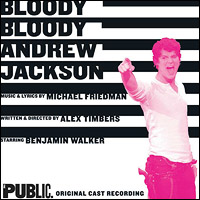 Of the Show, I Wrote: "Finally, there is a show that no one can say "they didn't carry it out as far as they could," or "they sold out and went commercial," or "it's it too bad they compromised." No, BBAJ is evidence that you can still be all out with your creativity, that you can be smart and still be fun, and that there is an audience for unlikely subjects as long as you stick to your point of view and you remember that musicals are first and foremost a form of entertainment. As such, this show is the almost perfect blend of what I love about musicals. It ignites all of my senses, it makes me think, it makes me feel and it sticks with me long after exiting the theatre." 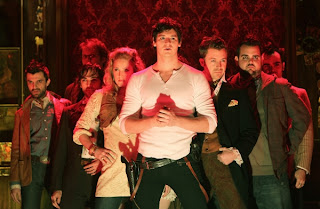 The Cast of Bloody Bloody Andrew Jackson
(Benjamin Walker, center)
Of the Score, as it Played Out in the Theatre: "It makes sense that the self-proclaimed "emo rock musical" fires on all cylinders - an edgy rock sound, overly emotional with repetitive and bizarre lyrics, the trademark over enunciation of words - my favorite being the words "in particular" repeated ad nauseum as "ian perticulyur" - and of course, the profanity laden lyrics that express both sexuality and anger in the same chorus. (I will not debate the authenticity of the score to the genre, but it certainly sends up what I do know about emo rock and its practitioners.) Highlights of the score include the Schoolhouse Rock-on-Ritalin-liquor-and-pot influenced "Populism, Yea, Yea!", the ready for radio "Rock Star", the indie station-esque "The Saddest Song", and the most scathing and catchy number in the show, "Ten Little Indians." The latter song sums up perfectly what my senses were like during the entire 90 minute show: it was clever for my ears and interesting for my brain, the sentiment made my blood boil, and the clever delivery (by outstanding ensemble member Emily Young) made the theatre lover in me tingle. The score alone - played, mind you, by but three musicians, Justin Levine, Charlie Rosen and Kevin Garcia and supplemented on occasion by cast members - gave me more than my money's worth."


On This Recording I Am Going to Say: Even as I re-read my initial thoughts, I can't help but think about the fact that having seen the show helps one to understand the songs as presented on the CD.  But I also can't help but think yes, but it really needs the visual to make the experience totally worthwhile.  That is not to say that I don't enjoy the CD.  I do. Very much.  All 28 minutes of it.  The same songs that I loved in the theatre are the ones I love here: "Ten Little Indians," "Rock Star," and "The Saddest Song."  The number "Illness as Metaphor" is the one number best served by having seen the production.  All four of those songs would make it into my iPod, if I had one. 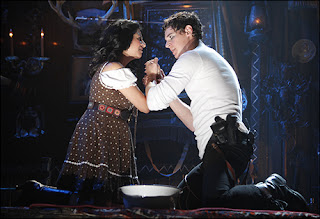 "Illness as Metaphor"
The quality of the recording is top notch - crystal clear sound and excellent mixes that make 100% of the lyrics understandable.  The performances (here the complete off-Broadway Cast, most of whom transferred to Broadway) are uniformly good, with fine vocal quality and attention to character.  Benjamin Walker earns/retains his "I'm a New Broadway Star!" title with this recording.  I guess what is missing, and what makes some of it flat when listening to it is that many of the jokes, while chuckle-worthy here, were gut busters of hilarity when you saw how the jokes played out in the theatre.

One last question:  when did they stop putting Parental Advisory labels on CDs with profanity?  Yikes!  I am so glad I had my headphones on at work when I put this CD in the player!

The score is bold, new and fresh.  And for those reasons alone, it is a valid and valuable addition to any cast recording collection.  But I can't promise you what kind of time you'll have with it.  Seeing the show helps, but it might not matter, either.