5 Reasons Why You Should See PRISCILLA!

PLEASE TAKE A MOMENT TO VOTE ON THIS MONTH'S POLL
AND FOR HOT/HOTTER BY CLICKING ON THE ICONS TO YOUR LEFT!  THANK YOU!

Following an afternoon spent on the emotional roller coaster that is Merrily We Roll Along, it was somewhat of a relief to know I'd be making a return visit to Priscilla Queen of the Desert that evening. Nearly a year into its run at the Palace Theatre, the show remains in pristine, Opening Night shape.  More importantly, the show remains the flashiest, splashiest song and dance extravaganza, most fun musical on Broadway.

Both times I've seen the show, the audience was having a blast, singing and clapping along, roaring with laughter and cheering the adventures of Tick, Adam and Bernadette.  And, of course, Priscilla!  So it mystifies me as to why the show isn't as tough a ticket as The Book of Mormon.  Priscilla is smart, witty and full of heart.  It should be SRO at every performance.  Here are the 5 biggest reasons why you need to see this show or see it again! 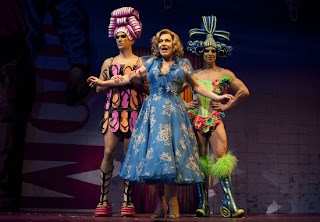 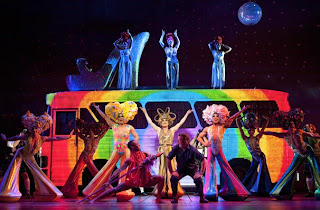 5.  The costumes!  They won an Oscar for the film version and a Tony for the Broadway version.  I mean, how can you NOT love the flip-flop dress?  And those awesome Aussie Gumbys?  But the best, by far, for my Broadway buck, is the finale tribute to Australia!  When our three leads turn into the Sydney Opera House, it is nothing short of amazing! 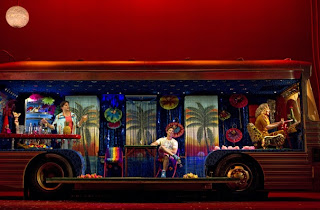 4.  Priscilla!  Is there anything that bus can't do?  From the spinning tires, to the naughty bumper sign, she's a gay romp all by herself.  Then there's the light up exterior, the tropical interior, and the tres cool lifts that transport people to the roof... 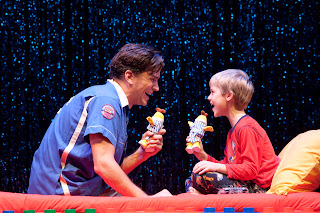 3.  Will Swenson!  A gorgeous man (who may not make the most beautiful woman) with a smile that lights up the Palace, Swenson brings a lot of warmth and sincerity to a show that is filled to the brim with lightweight camp.  His fears about his son's acceptance are palpable, and the scenes where they meet and bond reduce me to tears every time.  Sweet, but not saccharine.  And his unabashed joy during "MacArthur Park" makes me want to dance in frosting! 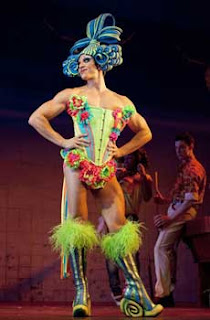 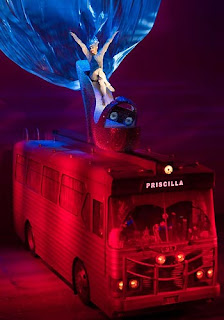 2.  Nick Adams!  Attention medical students: need to review the human muscular system? Get an orchestra seat and study this beautiful specimen!  Attention Broadway fans:  Get a seat anywhere at the Palace to witness this larger-than-life portrayal of youthful abandon unchecked (and wonderfully grounded by real pain at a lack of family support).  Adams will make you laugh til you hurt and even cry a little, too.  Best of all, he knows just how far to go without becoming a cartoon version of himself.  And he has the three best moments in the show: "Material Girl", singing Madonna on the rocks, and his diva-delicious operatic drag atop a giant shoe atop the bus!  The boy is going places! 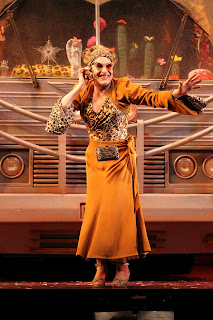 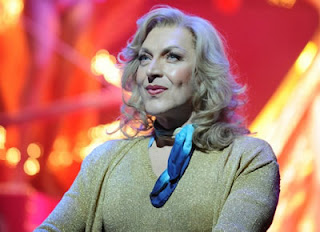 1.  Tony Sheldon!  You know, I'll bet there are people who leave the Palace every night thinking he really is a woman.  Leagues beyond female impersonation, Sheldon brings a truth and profound humanity to his role as transgender Bernadette.  She's tough as nails and has a heart bigger than the whole Outback.  Mr. Sheldon is a true wonder - especially considering how fresh he seems after a gazillion performances all over the world - and he is the loving glue that holds the whole show together.  To miss any of the three leads would be disappointing, but to miss him would be a true loss to any musical theatre enthusiast.  His performance erases any doubt that people in musicals can be as brilliant on stage as anyone doing Shakespeare, Shaw or O'Neill. 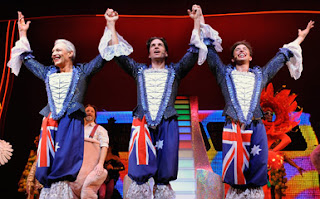 The discounts available for the show, even on a Saturday night, are amazing, so you can't even claim poverty.  GET YOURSELF TO THE PALACE THEATRE!  You won't be sorry.