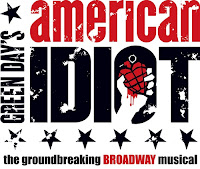 As I watched the opening moments of the second-to-last Raleigh performance of the splendid national touring production of American Idiot, it struck me that this was by far the quietest performance of this show that I’ve attended.  Judging by my ears alone, the sound system seemed very underpowered and the audience (as Magaldi would say) seemed to be sitting on their hands.  But then I took a look to my right and left and saw that the people around me were enjoying it and applauding and even laughing.  Eventually it became clear to me that the venue was the culprit: Raleigh’s vast Memorial Auditorium was swallowing up all the sound.  Having concluded that neither the audience nor the production was doing anything wrong, I happily enjoyed the rest of the performance. 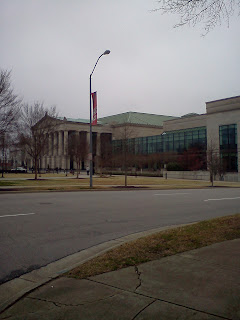 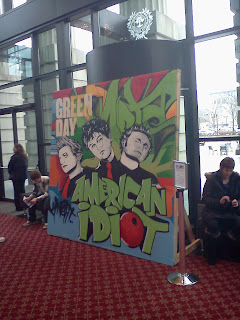 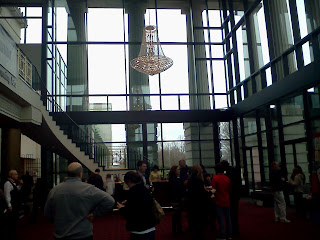 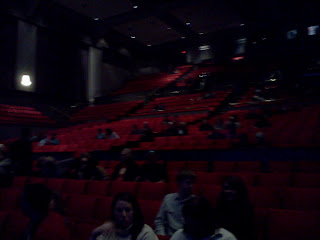 Much has been written here about this show, by me and by Jeff, so I will stick to discussing the strengths (and occasional weaknesses) of the touring production itself.  (Nor will I talk in detail about the differences between this production and the Broadway version – you can read a discussion of that here.)

The physical production, as always, is impressive in its scale and its attention to detail.  The main set piece (set designer: Christine Jones) is the back wall, which runs across the entire width (and visible height) of the stage.  Painted black and covered (but not slathered) with posters and the occasional chalk scribbling, it reminds one of a music venue for local bands – the kind of place where the pre-Dookie Green Day must have played many a set.   About 35 television screens are embedded in the wall; these flash appropriate images and messages (designed by Darrel Maloney) to the audience, and are especially effective (and critical) in the song “Favorite Son.”  The remainder of the set is extremely simple: a modular, moveable metal staircase, a matching box of scaffolding that doubles as a bus, some beds, chairs, and sofas.  All of this allows for setting each scene without interfering with the extremely quick flow of the show. 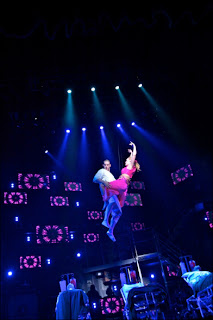 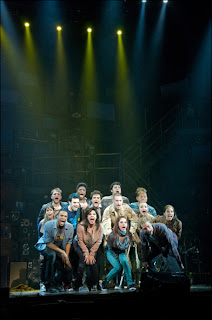 The other design elements are equally effective, and tightly coordinated with other aspects of the production.  Even more than on Broadway, Kevin Jones’ signature lighting style comes through here, with rows of neon lights mounted on the back wall of the set to create a variety of effects:  cool blue during “Boulevard of Broken Dreams,” angry red during “St. Jimmy,” and red-white-and-blue for “Homecoming” – simple, but it works.  The same can be said for Andrea Lauer’s costumes, of which there are many in this show: lots of slacker wear, sequined dresses, military uniforms, and some leather, too – nothing very unexpected, but all appropriate.  Finally, despite my qualms about the volume level, Brian Ronan’s sound design strikes a good balance between the band and the voices.  There were a few isolated microphone issues at the performance I saw, but since this did not happen when I saw the show in Utica, I’ll give him the benefit of the doubt.

With one exception, the acting and singing in this production is absolutely top-notch, at least as good as it was on Broadway.  If you see this production in your home town, you’re likely to see Van Hughes in the leading role of Johnny.  As I have written before, Hughes is the perfect Johnny – his acting is natural and relatable, and he has a powerful and dynamic rock voice that is perfect for this score.  However, in the performance under review, the role of Johnny was played by understudy Larkin Bogan.  (Having seen Van three times in the role, and having seen Bogan’s strong work in Hair, I was not disappointed to see his name on the substitution board.)  Bogan is at least as good an actor as Hughes, and it was easy to relate to his Johnny on a very down-to-earth level.  This was especially true in the scene leading up to “Wake Me Up When September Ends,” when an absolutely broken Johnny writes a letter home to his mother.  It was pathetic in the best sense of the word, and absolutely perfectly played.  Bogan’s singing, however, is not up to the level of Van Hughes or John Gallagher, Jr., at least for this kind of music.  While those two have true rock voices, I suspect Bogan has an excellent music theater voice that he has simply drained of vibrato to sing Green Day’s songs.  (For all these reasons, I very much look forward to seeing Bogan in a more traditional show in the future, something I have no doubt will come to pass.)  Finally, I must take note of Bogan’s eery similarity in appearance to a young Billy Joe Armstrong, which both freaks me out and gives the show a sense (accurate or not) of autobiographicality. 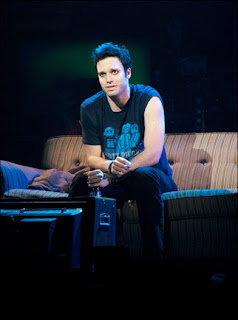 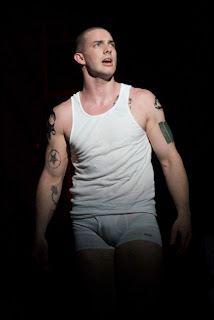 Rounding out the trio of leading boys are Jake Epstein as Will and Scott J. Campbell as Tunny.  Now, I have seen four different actors perform the role of Will (including Van Hughes), and I thought all of them were pretty much equally good, which suggests that this maybe isn’t the hardest part in the world to play; regardless, Epstein does a fine job in this production.  His rendition of “Give Me Novacaine” and “Nobody Likes You” were both sweet and sad.  Unfortunately, Campbell is not the ideal Tunny.  He certainly looks the part, but his voice seems a tad underpowered, and his acting somewhat flat.  Certainly his performance is adequate and does not detract from the show, but I was a little less invested in this Tunny than I was in, say, Stark Sands’.

The rest of the cast is excellent.  Nicci Claspell’s Extraordinary Girl and Gabrielle McClinton’s Whatsername have beautiful voices and are good complements to Tunny and Johnny, respectively.  Particularly good is Leslie McDonel in the role of Heather.  She has an angelic voice and a demeanor that goes from sweet and innocent (well, maybe not so innocent!) to snide and sophisticated.  (She wore a Wolfpack tee shirt in one scene, just as she had worn a Utica-specific shirt when I saw the show in December, so I imagine this gentle gag will be repeated in each city.)  Finally, Joshua Kobak’s take on St. Jimmy is, I think, pretty much definitive.  His performance is just as creepily intense as Tony Vincent’s, as playful at times as Billie Joe Armstrong’s, and as perfectly attuned to his respective Johnny as Andrew Call’s.   He looks and sounds much like Johnny might look and sound after a decade of hard living.  In this production, more than ever before, the creators’ intent for this character is clear. 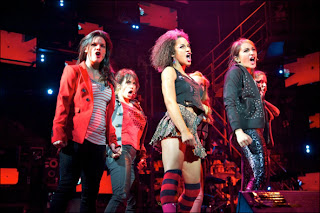 Having seen American Idiot nine times now, I am convinced that the thing that keeps me enthralled, time and again, is the visual imagery of Michael Mayer.  After we had seen the show for the first time back in 2010, I told Jeff that I had felt like a baby in a crib watching a mobile – utterly enraptured and entertained by the images that were swirling before me.  All of those beautiful images, I’m happy to say, are perfectly intact in this touring production: Johnny holding on for dear life as he symbolically boards the bus that will take him on a new adventure; Tunny falling for the seductive power of television; Johnny and Whatsername entangled in a ballet of rubber tourniquets; Tunny meeting Extraordinary Girl for the first time high (in more ways than one) above the stage.  (In creating these images, he is greatly assisted by the gritty choreography of Stephen Hoggett.  As Jeff noted after we saw the show in Utica, some of this choreography, in scenes like “Letterbomb,” remains a bit too precise and synchronized, but I suspect the cast will get looser with this as time goes on.)

I had originally chosen to see this touring production in Raleigh because I thought that was as close as it was coming to my hometown in Maryland.  Much to my delight, it was recently announced that the show will be playing at the Hippodrome in Baltimore next season, so my American Idiot adventure will continue into 2013.  As much as I have written about this show, thanks to Jeff’s kindness with sharing space on his blog, I don’t think I’ve ever explained precisely why this show and this story resonate with me.  If Jeff is kind enough to share space again, I will do that after I see the production for the last time in Baltimore.


Are you a huge fan of a certain show?  See a show I haven't reviewed?  Want to blog about it?  Contact me at jkstheatrescene@yahoo.com.