"How do we get to be here?" asks the ensemble in the title number of Merrily We Roll Along, the much re-tooled, revised and now revived musical by Stephen Sondheim and George Furth (book revisions supervised by James Lapine).  The older I get, the more understandable and depressing that key question gets.  By starting at the end and working backward, we start out knowing how the main characters end up: one greedy, one drunk, one alone and all three miserable.  As the story unfolds, or rather devolves, we find out all of the mistakes, bad choices and meaningless arguments the main characters make which leads to their sad demise.  But we also see what made them have such a profound bond made up of professional trust and personal, unquestioned love.  Perhaps most sadly, we end on the happiest note of their lives: they are full of nothing but optimism, meeting for the first time and on the cusp of adult life where everything - anything - is possible. 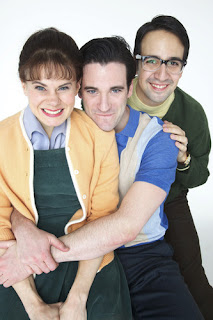 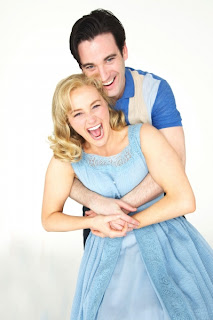 Why that final moment of pure happiness is so sad is both a point of contention for Sondheim purists and more importantly why the show doesn't work for most theatre-goers.  This version features a new ending, with Frank, Charley and Mary meeting on a rooftop for the very first time; we see the very moment when their lives will forever become entwined.  Literally, anything is possible for these three.  And knowing how they will turn out is so sad.  Knowing how any one decision they make in the future could change everything and knowing that it won't happen is a rather difficult thing to watch on the stage, not to mention a difficult thing to contemplate in our own lives.  What decisions have we made that took us off a path to real happiness, what compromises did we make that could have changed things for the better.  How do we get to be here, and how will we end up?

Furth's book is careful to introduce characters to us the first time and to give us clues as to what happened before that got us to the point we are seeing.  Jokes about "current events" make the show relatively easy to follow.  The reprises before the complete songs and the character driven motifs of Sondheim's score give the musical its cohesion and devastating heart.  Unfortunately, because we start out at the lowest point in the story of their lives, we also start out with main characters we dislike, in tension filled moments and appropriately sad music.  Despite the bouncy opening number, once the action starts - with the equally catchy "That Frank" - even the catchy numbers are laden with sarcasm, anger and hurt feelings.  And there follows a succession of beautiful, but sad and angry, ballads.  For most theatre goers, the show in general, and act one in particular find the show not to their liking.  A great score (arguably one of Sondheim's finest) isn't enough to overcome unlikable people in an unlikable situation.  And until that problem is fixed, no matter how good a production this show gets, Merrily We Roll Along will never be the success it could and should be.


And this production is a very, very good one, especially considering that the whole thing is put together in less than two weeks.  What started out as semi-staged concerts of troubled musicals has evolved into pretty fully staged shows with lighting, sets, costumes and full staging.  In fact, the only thing the really betrays the fact that this is not a full production is the fact that the cast carries around black binders with the script and music in it.  And that would even really be noticeable once you got used to it, except that for many scenes, there isn't a single binder in view, while other times, they are brought in, set down and left until the end of the scene.  My thought is this: either decide to use them 100% of the time - even if you are pretending - or tell everyone they must be off book period.  None of the leads needed them, and quite frankly (no pun intended) if an ensemble member can't remember his/her line in mid number, why are they up there in the first place if everyone else memorized?  Oddly, it was chorus members who were the most distracting with them.

All of the elements are present - Ken Billington's simple light plan helps set the mood and focuses us where we need to look; Ann Hould-Ward's costumes are period perfect and even humorous; Wendall K. Harrington's projections, which set the time and place for us (crucial to the story for those new to it), are also fun in watching the principals' faces superimposed into famous news photos.  Only the sound design by Dan Moses Schreier seemed not up to the rest of the production, especially in group scenes.

It was glorious as a musical theatre enthusiast to hear a full orchestra play the score -actually 3 pieces larger than the original - and all fine tuned by the great Jonathan Tunick and under the skilled baton of Rob Berman, who has quite an on-the-spot ear for changing tempos or vamping for an actor when necessary.

The ensemble reads like who's who of Broadway - all 20 of them should be famous in their own right.  Standouts include Pearl Sun, Andrew Samonsky and Kenita R. Miller, who impress in small but important roles.  And young Zachary Unger is sweet and heartbreaking as Franklin, Jr..  Michael X. Martin and Collen Fitzpatrick also do a nice job as Beth's disapproving parents.  Finally, the four dancers that surround Gussie during "Musical Husbands" deserve a nod as well - Whit Baldwin, Sean McKnight, Charlie Sutton and Karl Warden.


The six principals alone make this production a must-see.  Adam Grupper as the agent and long-suffering husband of star Gussie is terrific - funny, stearn and ultimately (firstly) a tragic reminder of how fast one can fall into poverty in this country.  This was my first live run in with Betsy Wolfe and I was very impressed that she really mined every emotion of the role of Beth, who can be seen as a sort of bad guy, but here remains somehow sympathetic.  And her rendition of "Not a Day Goes By" is a standout among standouts.

I have seen several productions of this show, and I never realized how dominant a force Gussie can be until seeing this performance by the always marvelous Elizabeth Stanley.  She nails the character - you mange to be taken by her even as she takes rotten bitchiness to levels unseen since Bette Davis.  She is a whirlwind force of star quality, bombastic personality, and selfishness born from being too long in the shadows.  Watching her character go backwards is an amazing study, really.  By her last scene, she is unrecognizable from the woman she ends up being.  If this were an all out Broadway production, I'd say Audra has some serious competition.  Brava, Ms. Stanley.

The central trio of the show will make or break it, and they have really hit the jackpot with this cast.  Lin-Manuel Miranda oozes charm from his every pore, making you ache for poor Charley, too nice of a guy to stand up for himself, until it is too late and it destroys his friendship and working partnership.  Some have written that his voice is weak.  I disagree.  It is character appropriate - meek and mild when necessary and in full, beautiful harmony with the others when necessary, too.  If his voice were like his co-star's it wouldn't fit musically or thematically, and certainly not the character.  Miranda proves here that he has quite a range as an actor - this couldn't be farther from In the Heights.  I can't wait to see him onstage again.  Colin Donnell makes a much bigger impression here than he does in Anything Goes, where gets kind of steamrolled under by the sheer force of his co-stars.  No, here, he takes full charge as Franklin Shepard, and like Ms. Stanley, watching his character go backwards from arrogant asshole to confident newcomer to idealistic artist is absolutely fascinating.  He manages to make you hate him for what he's done to the two people who have stuck by him through it all, and yet feel for his position with each choice he makes.  It is interesting to have seen the car crash first and then see what makes it happen after.  Mr. Donnell is also a terrific vocalist, despite the fact that he is playing one of the few leads in a musical without a solo number.  Interesting.  But the find here, the glue that holds the friendship together is the Mary Flynn of Celia Keenan-Bolger, who goes toe-to-toe with her nemesis Gussie (Stanley) with a heartbreaking gusto.  This Mary doesn't dominate the show they way I've seen others play it.  Instead, you see a woman desperate to ber noticed, desperate to be appreciated for her undying support, and desperate to be loved by the one man who never seems to see her.  Her opening scenes, when Mary is in a full alcoholic drunken stupor, are simply tragic, and it is almost a relief to see her morph back into the nice, sweet girl she was.  I say almost, because you can't ever forget what she becomes, and it is nothing short of tragic.


Because of the unbelievable chemistry between the three - you'd swear they worked every show in their careers together - and because of the dynamic shift caused by the presence of Gussie looming over everything, I don't think the final number, "Our Time," has been more poignant in the context of the show than it is here.  I never get through it without tearing up, even out of context.  With Merrily We Roll Along, the best part is ending up with optimism and hope.  The worst part is knowing that it doesn't take much to take it all away.