PLEASE TAKE A MOMENT TO VOTE IN THIS MONTH'S POLL
AND IN ROUND 2 OF "HOT/HOTTER".  THANK YOU. 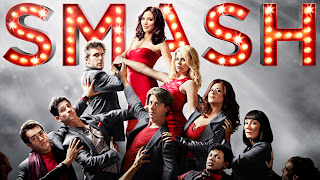 Caution: This blog contains plot spoilers from the premiere episode of Smash.
This is NOT a review of NBC's Smash, though I will be posting one of those tomorrow.  Instead this is intended to be a reality check for all of us (myself included) about its chances for success beyond the first episode.

Here are several reasons why Smash could end up not being one:

The Subject Matter and the Ratings:  Despite the pleas of the producers of Smash, who insist that there is plenty of soapy fun for non-Broadway fans to enjoy in this drama - family acceptance issues, troubles with adoption, divorce entanglements are but three touched upon in the pilot, the show is all about putting on a Broadway musical from idea to opening night.  Will there really be a balance?  Ratings are what keep shows on.  Can a musical about a musical keep up ratings?  One need only remember the yearly "hold-your-breath" ritual after the Tonys to see if the ratings are enough to warrant a TV telecast next season.  Arguably the most important night in commercial theatre, one would expect that the Tonys would draw the most ardent theatre fans to the tube.  The most recent editions of the Tonys have averaged right around 7 million, with the trend inching downward overall, and considerably down over the past 10 years.  If even just the most ardent theatre fans tune in weekly, is 7 million enough to keep it going?  Maybe.  It is in a good spot, 10PM Mondays.  But will Dancing with the Stars fans change the channel (surely they are a large part of Smash's target audience) to watch the show, or stick with Castle? 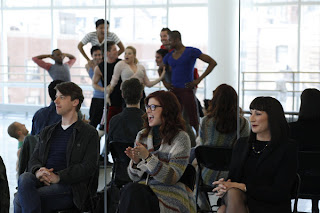 Too Broadway "insider"-y:  While theatre fans will lap up references to Michael Riedel, Spider-man and Kristin Chenoweth, and enjoy watching Broadway stars out act their TV counterparts, will the rest of the audience get it?  I mean, it took almost the entire pilot to reveal what it means to be "light."  And that was the very definition of anti-climax.  And how long will it still be fun for even theatre fans to play "spot your favorite chorus boys and girls in bit parts" or count the number of show posters in the background versus the shows you've seen or done?  (Love me some Curtis Holbrook and Spencer Liff, but I'll be very disappointed if this is the last we see of them.)  Won't the majority of the audience think Debra Messing is being a bitch when she complains that musicals are only revivals or movies made into musicals?  Only theatre people will get that that is a problem, not a good quality.  Will America understand why the director is insulted over having to audition himself? And will they recognize that real auditions don't include lascivious remarks from judges or nasty barbs from anyone with a British accent?  Will the simple "thank you very much" and very private callback phone call be dramatic enough in this Idol age?  And will the notoriously snobby Broadway fan base be willing to love Karen as much as they love Ivy even though Karen is not played by a Broadway "star"?

The Subject Matter of the Subject Matter: The coveted 18-49 demographic, especially the even more coveted lower end of the scale is going to be a problem.  The show itself rather cheekily addresses this issue: Debra Messing to "son": "When you hear 'Marilyn', what do you think?"  Son: "Baltimore.  Baltimore, Maryland."  Messing: "No, not the place, the person..." Son: "Oh! Marilyn Manson."  Sure she's an icon and really perfect for a decent musical treatment, but will Marilyn Monroe bring any of the young ones to the screen? 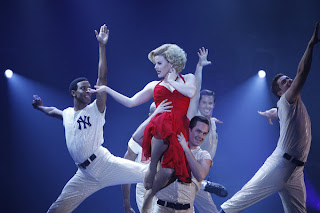 The Songs: With the exception of about 8 bars of "Somewhere Over the Rainbow" which opens the show, and the HEAVILY advertised "Beautiful" (beautifully sung by Katharine McPhee), every song in the pilot is from the show they are building.  It makes sense if we are watching a how to make a musical musical.  But who, besides theatre geeks like us, will find that to be enough?  Will there be more pop hits sprinkled throughout?  Will it make sense?  I turn to my brother-in-law, who dismissed Smash after the "National Pastime" number:  "No one wants to watch Broadway dance numbers every week, especially to songs we don't know.  I can live with the 'bursting into song' thing, but unless they do songs I know and dance like in music videos, it isn't my thing."  My sister, who actually enjoys live theatre said, "The part of Smash I liked least was when they were at home singing the song that was eventually their call back number.  If this is supposed to be a soap opera about theatre, leave the singing for the audition room, rehearsal hall and when they fantasize about the finished product - which really helps you see and understand what the actors think about when they are singing and helps you see how it goes from rehearsal to what you see on stage.  Still, Broadway people work very hard, but their lives aren't actually musicals.  Show them some respect!"

The inevitable and completely inappropriate comparison to Glee:  Even theatre people are doing this and there is no comparison between the two after they characters sing and dance, which is their only comparison point.  They are different in every other way.  One, Glee is a show aimed at younger people - tweens and high schoolers.  We watch because we crave having lives where we can rule the school with a flashy dance move and a thrilling vibrato.  Two, Glee uses (mostly) pre-existing tunes (notice how fast they dropped the "let's write our own stuff."  Three, Glee only flirts with reality.  Everything else is a hyper-reality of extremes and emotional mood swings - a great way to let the kids see how silly it is without actually saying their real-life shenanigans are bullshit that they will laugh about when they grow up.  These are but three things that Glee is, and Smash isn't.  Unfortunately, there will be camps for both sides, once the first few episodes air of Smash.  I say like or hate one or the other or both.  They are two completely different shows. 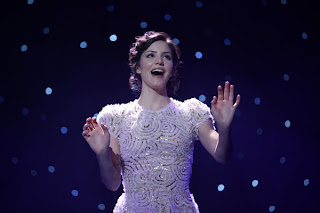 The Turn-Off: Smash plays the Broadway stereotypes to the hilt.  Maybe this is just a gateway to get people hooked... let them think Broadway really is what the stereotypes are, and then dazzle them with the real dirt.  I hope that's the case.  But let's run through the stereotypes in the pilot: the gay composer and his fag hag partner in crime, the fawning assistant who works his boss like a puppet, the parents from the Midwest, who are "going along with this acting 'thing' that they know is 'just a phase,'" the chorus girl who wants to be a star, the casting couch with horny director getting a woody for the new girl, the new girl who is naive, but not really, the sexually ambiguous director who talks straight and beds the chorus girls, but has clearly had something in the past with the composer, the almost too supportive boyfriend, the realistic theatre widow husband... of course, stereotypes are just that because there is some truth to them.  Somehow, I expected more... or do I mean less?

Life Expectancy:  Barring a huge ratings mishap, NBC has so much invested in this series, I'll be surprised if they don't show the whole thing.  But is this a show meant to have more than one season?  If it is a hit, will it take years to get "Marilyn" to the "stage"?  Or will each season be a new musical?  Maybe this is a case for a telenovela style show.  13 episodes and that is it.  On the other hand, I'd hate to grow to love these people and never see them again... you know?

TOMORROW: My review of Smash.  Why I hope it will be a huge one!